Parents Vs. the Political Class 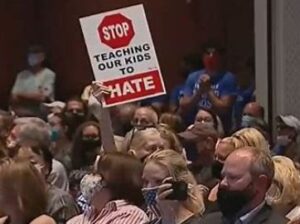 That is the No. 1 question Virginia voters face in the gubernatorial race of 2021. Democratic candidate Terry McAuliffe made the issue crystal clear — and whose side he is on — when he said during the debate with Republican Glenn Youngkin: “I don’t think parents should be telling schools what they should teach.”

The answer begs the question. If not parents, who should tell schools what they should teach? Sure, public schools need bureaucrats who are expert in the process of devising standards, curricula, methods, and tests. Sure, teachers don’t need parents micromanaging them. But who, ultimately, do the bureaucrats and teachers answer to?

Normally, such a question would not get people exercised. But these are not normal times. A movement of the cultural elites, originating in academia with increasing support from the political class, is pushing to convert schools from centers of learning into incubators for sweeping social and cultural change.

McAuliffe is not alone in believing that government knows best. Voices in the political class are openly expressing their contempt for the increasingly vocal protesters at school board meetings as an ill-informed rabble.

A reporter recently asked U.S. Education Secretary Miguel Cardona why school board meetings had gotten so heated. “I think it’s a proxy for being mad that their guy didn’t win. … It looks like education is becoming, in some places, a battleground for ideological differences.”

Translation: Right wingers upset by the radical transformation of public schools have seized on school issues as a way to express their inchoate frustration and rage. There’s no need to understand their concerns. The only thing that needs to be understood is mob psychology.

Another example: Yesterday the National Association of School Boards (NASB) penned an open letter to President Joe Biden accusing conservative protesters of “malice, violence, and threats” against local school board, citing 20 instances of “threats, harassment, disruption and acts of intimidation.” “Heinous actions,” such as performing a Nazi salute to protest masking, stated the letter, “could be equivalent to a form of domestic terrorism and hate crimes.”

There are, by the NASB’s count, 14,000 local school districts in the United States and more than 90,000 school board members. Of the 20 incidents cited — one for every 700 school districts in the country — one individual in Illinois was arrested for aggravated battery and disorderly conduct. At other meetings, protesters “incited chaos.” In Virginia, states the letter, “an individual was arrested, another man ticketed for trespassing, and a third person was hurt during a school board meeting discussion distinguishing current curricula from critical race theory and regarding equity issues.”

Horrors! A man was ticketed for trespassing? Head for the bunkers! Call out the National Guard!

True enough, some protesters have gotten out of hand. The right to freely assemble does not give people a right to disrupt public proceedings. Those who do should be admonished for it. I have no problem with escorting people off the premises if they don’t comport themselves properly at school board meetings, or with arresting those who resort to physical violence. I’ve called out Black Lives Matter protesters for disrupting council meetings with shouts and chants, and I’ll apply the same standards to conservatives.

But terming the protests a form of domestic terrorism and hate crimes.” Really? That’s delusional. But it’s a telling form of delusion — it reveals much about the state of mind in the political class and who the nation’s rulers it see as the enemy.

I’ll close this post with a short video from my favorite dissident mom, Nasra Nomani, a leader of the Loudoun County parents’ insurrection.

I taped a message to the Nat’l Association of School Boards. I am what a domestic terrorist looks like? You owe parents an apology! Politely message them @NSBAPublicEd, 703-838-6722 info@nsba.org. Copy me. We reject violence. I am an #UnapologeticParent ❤️ Like you! @defendinged pic.twitter.com/2cSqzDuj9C