Oyez, Oyez. The Virginia Court of Appeals is Changing. 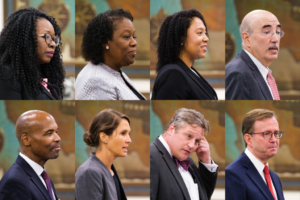 One of the General Assembly’s most cherished prerogatives is the election of judges. When one party controls both houses of the legislature, that power is particularly relished. The Democrats had the opportunity in this special session to exercise its prerogative in a big way by electing eight judges to the Virginia Court of Appeals.

There were two unusual features in the election of these judges this session:

The election of judges is an area in which partisanship is highly visible. Out of power for many years and thus shut out of the process of electing appellate judges, General Assembly Democrats made it clear they were not going to share this opportunity with Republicans. Because of the large number of available judgeships, there was a plethora of candidates. Reportedly,  an original list of more than 80 people was being considered. Over the course of several days, in meetings and interviews behind closed doors from which Republicans were excluded, the list was whittled down to eight names. Those eight people were then “interviewed” in public session and subsequently elected.

This group of new appellate judges is markedly diverse, which Democrats readily admit was their goal. The group includes four Blacks and four women.  Currently, there are three women judges and one Black judge on the Court of Appeals.

The group also brings diversity in their backgrounds. Only two of the new judges are currently lower-court judges. In the past, many appeals court judges had been prosecutors at some point in their careers. Only one of the new judges was ever a prosecutor and, in two firsts, a legal aid attorney and two former public defenders were elected.

There is a lack of diversity in one area, however — the regions from which the new judges come:

There is only one from west of the Blue Ridge and none from beyond Roanoke. Only one (Front Royal) could be said to be from a rural area. (One would have thought that there would be at least one good Democratic lawyer somewhere in Southside or Southwest Virginia!)

To be fair, the current membership of the Court of Appeals is about the same. Of the ten members, one grew up in Mecklenburg County, one was a former prosecutor in Lynchburg, and one represented Warren County and surrounding counties in the General Assembly. (With the new judge, that will make two from Front Royal.) The remaining members of the current court are from Northern Virginia, Hampton Roads, and the Richmond area. Southside and Southwest Virginia continue to be shut out on the Court of Appeals.

This entry was posted in Courts and law, General Assembly, Uncategorized and tagged Dick Hall-Sizemore. Bookmark the permalink.