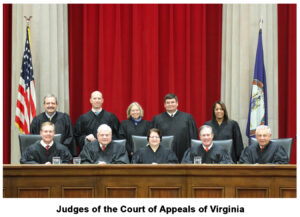 Perhaps the most surprising item in the Governor’s recently-presented budget bill was the proposal to increase the size of the Virginia Court of Appeals by four judges, from 11 to 15. It is certainly one of the most controversial. The Republicans immediately decried the proposal as “court packing”.

As usual, the issue is more complicated than its opponents would have one to believe. The Governor’s proposal reflects the unanimous recommendation of a two-year study conducted by a working group appointed by the Virginia Chief Justice and the Judicial Council. (The membership of the Council consists of eight judges, two attorneys in private practice, and the chairmen of the House and Senate Courts of Justice Committees.) That recommendation is supported by both the Virginia Chamber of Commerce and the Virginia Manufacturers’ Association.

The Commonwealth has a two-tier judicial appellate system. The Court of Appeals is the first appellate level after the circuit courts. Its principal areas of jurisdiction are: criminal cases (by petition), state administrative agency cases, workers compensation, and domestic relations.

The Virginia Supreme Court is the highest appellate court. Its jurisdiction includes cases appealed from the Court of Appeals, as well as civil cases on appeal.

Virginia is the only state in the nation in which the losing side in a trial does not have an automatic right to have his case considered on its merits by at least one appellate court (known as appeal of right).

These proposals did not just materialize this year. As noted in the Judicial Council report to the General Assembly, the Chief Justice designated a 20-person Working Group in 2018 to “study the appellate jurisdiction of the Court of Appeals of Virginia and to make recommendations on whether it should be given jurisdiction to hear appeals as a matter of right in all civil and criminal cases.” As noted in the report, the issue had arisen in previous years. Following up on this study, the 2020 General Assembly directed the Judicial Council to make recommendations to the 2021 General Assembly concerning “implementing an appeal of right in all cases decided by and appealed from the circuit courts.” (The resolution passed by voice vote in the Senate and by a bipartisan vote in the House.)

More than 70% of the appeals received by the Court of Appeals deal with criminal cases. In recent years, the court has received 1,500 to 1,550 petitions to hear the appeal in a criminal case. About 12% of those petitions have been granted a full merits hearing each year.

The Judicial Council recommended the establishment of an appeal of right for all criminal cases. All appeals would be heard by a panel of three judges of the Court of Appeals, which would have the option to dispense with oral argument in any case where it is determined that there would be no “material benefit from that process.” In any event, the court would have to state the reasons for its orders and decisions. Any decision could be appealed to the Supreme Court, which have the discretion to take it up.

Currently, the Supreme Court has discretionary jurisdiction over most appeals of civil cases. Only about 20% to 25% of those appeals are allowed a hearing. The Judicial Council recommended that all civil judgments be appealable of right to the Court of Appeals, with further appeal available to the Supreme Court, which would have discretion to hear any case.

Under the law now in effect, local commonwealth’s attorneys have the responsibility of preparing the response briefs when a criminal defendant petitions the Court of Appeals to review his case. If the Court of Appeals grants the petition, the Office of the Attorney General  (OAG) then takes over the role of representing the Commonwealth before the Court. The Judicial Council report recommended that the OAG represent the Commonwealth from the outset in a criminal appeal, once a notice of appeal has been filed, thereby relieving Commonwealth’s Attorneys of that responsibility.

If all criminal and civil cases become appealable of right to the Court of Appeals, it is certain that the court’s caseload will increase. In order for the court to maintain its ability to promptly hear and dispose of appeals, it would be necessary to increase the number of judges on the Court of Appeals and its support staff. The Judicial Council projects that it would be the increase in the civil appeal caseload that would result in the need for additional judges on the court. The Governor’s budget includes $5.1 million for four additional judges and associated support staff, which is the minimum increase recommended by the Judicial Council.

The OAG will also need additional Deputy Attorney Generals and support staff if the General Assembly adopts the recommendation that it represent the Commonwealth from the beginning of a criminal appeal. The Governor has recommended an additional $800,000 to cover the costs of this expansion.

Far from being a political power play, the proposal to establish an appeal of right to the Court of Appeals for all criminal and civil cases and to expand the membership of the Court of Appeals to handle the resultant increase in caseload is the product of review and consideration by the leadership of the judicial branch. It is supported by the state’s legal and business community.

To be clear, the proposal is not a response to a growing caseload. Indeed, the number of appeals received by the Court of Appeals was lower in 2019 that it was ten years ago and has leveled off in recent years. Rather, it is an attempt to provide every criminal defendant and civil litigant the right to have his case reviewed on its merits by at least one appellate court, a right that is enjoyed by defendants and litigants in every state except Virginia.

If the General Assembly establishes an appeal of right for every criminal and civil case, it will be the second major change in the Commonwealth’s judicial system enacted over the course of 12 months. The 2020 Special Session ended the ability of juries to recommend sentences, unless the defendant chooses otherwise.

It was my experience while working at DPB that governors are very deferential concerning the separation of powers and do not include any recommendations in their budget bills that affect the judiciary (other than technical changes) without consulting with the Chief Justice. Governor Northam is a traditionalist and I am confident that he consulted with both the Chief Justice and the chief judge of the Court of Appeals, Marla Decker, before including this proposal in his introduced budget bill.

If the legislature passes the bill enlarging the Court of Appeals, it will not become effective until July 1. The legislature has the authority to elect judges, but the Governor has the constitutional authority to fill any vacant judgeship when the legislature is not in session and it would be reasonable to expect Northam to fill these new positions when they become effective. However, the term of any judge appointed by the governor expires 30 days after the commencement of the next General Assembly session. Therefore, the 2022 General Assembly would have the last word on filling these four new positions.

All the seats in the House of Delegates are up for election next fall. For the Republican complaint about Democrats “packing” the Court of Appeals to be credible would mean that the Republican leadership must be assuming that their party will not regain the majority in the House for the 2022 Session.

This entry was posted in Budgets, Courts and law, General Assembly, Uncategorized and tagged Dick Hall-Sizemore. Bookmark the permalink.