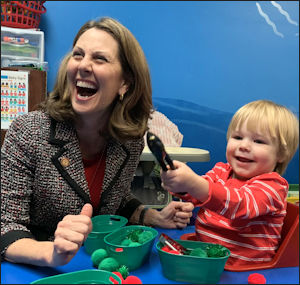 The primary justification offered for spending more on public pre-school is that other states spend more. If these articles in the Washington Post and Richmond Times-Dispatch are any indication, Northam provided no evidence — beyond his intuition — that the added spending would do anything lasting to advanced his stated goal of leveling “the playing field.”

“Where we end up in life has a lot to do with where we start,” Northam said in a statement. “Every child should have an equal opportunity to build a strong foundation, and early childhood education is one of the best investments we can make in our children’s health, well-being, and future success.”

First Lady Pam Northam, who has made early childhood education her cause, added this: “Ralph and I with our backgrounds — pediatric neurologist, pediatric occupational therapist originally and then as an educator — saw firsthand every day in our practices how little brains grow exponentially in those first years and how critical that window of time is.”

Academic research shows that early childhood education generally does have positive effects on children, but that the benefits fade as children move into elementary school. Some observers have used the research data to suggest that early childhood education is largely a waste of money; others have argued that the fade-out effect is not inevitable if it takes place in a high-quality environment.

Given these numbers, the first question I would ask as a legislator is this: Do we have any evidence that current programs have a lasting benefit for at-risk preschoolers? Or would we be spending an extra $94.8 million on blind faith that it might do some good?

The Northam plan would require participating preschools to take part in a classroom assessment program designed to measure and improve the quality of instruction. So, that’s something. Early childhood education also would move from the Department of Social Services to the Department of Education with the goal of streamlining the “crazy quilt” of governance across state agencies. Without knowing the details, I suppose that makes sense.

Republicans may not like the idea of expanding another entitlement for the poor while the middle class continues to struggle. But they are unlikely to be able to defeat Northam’s proposal in a Democratic-dominated General Assembly. However, if they unify, they could muster enough votes to make the program more accountable. They should insist that the program do two things: (1) track the effect of preschoolers through elementary school to see how strong the fade-out effect is, and (2) analyze preschool best practices to ascertain what, if anything, can be done to reduce the fade-out effect.

No one, not even liberals, wants to see the money wasted. If we’re going to spend $95 million more, let’s ensure that we spend it to maximum effect. There is no justification — none at all — for spending the money blindly with no means to determine if it makes a difference.