The paucity of developable sites and buildings resulted in Virginia communities being eliminated from consideration for at least 65 projects totaling 19,000 jobs and $5 billion in capital investment over the past three years, according to Virginia Economic Development Partnership President Stephen Moret.

Of the 466 large suites available for development as factories, distribution centers, call centers and other job-producing businesses, only 30 are classified as Tier 4 or Tier 5, meaning they are ready to compete for big economic development projects, Moret told the Virginia Growth and Opportunity Board Monday. Only two sites — one in Hampton Roads and one in the Roanoke/New River Valley region — qualified for the highest level of readiness.

In Moret’s analysis, site development is one of the four drivers behind site location decisions, along with workforce characteristics, supportive business climate, and quality of life. Virginia has historically under-invested in site preparation compared to states with whom it competes for manufacturing and distribution/logistics investment.

Moret’s findings come from what he believes to be the most comprehensive examination of a site portfolio in any state.

To achieve Virginia’s goal of becoming a Top 10 state for job growth, the Commonwealth needs to create between 260,000 and 460,000 jobs above baseline forecasts over the next 10 years, according to Moret’s presentation. Of those, between 38,000 and 66,000 must come from the manufacturing and distribution/logistics sectors. And to capture those jobs, Virginia will need between 160 and 200 additional project-read sites (above those available for baseline growth).

When VEDP began cataloging Virginia’s sites, basic information for many was severely lacking. Such basic data as water capacity, sewer capacity, power capacity, natural gas capacity, and rail capacity were unavailable. Now, after extensive research, VEDP can provide data on a wide variety of factors such as the estimated cost to develop the site to project-ready status, location competitiveness, and sector suitability. 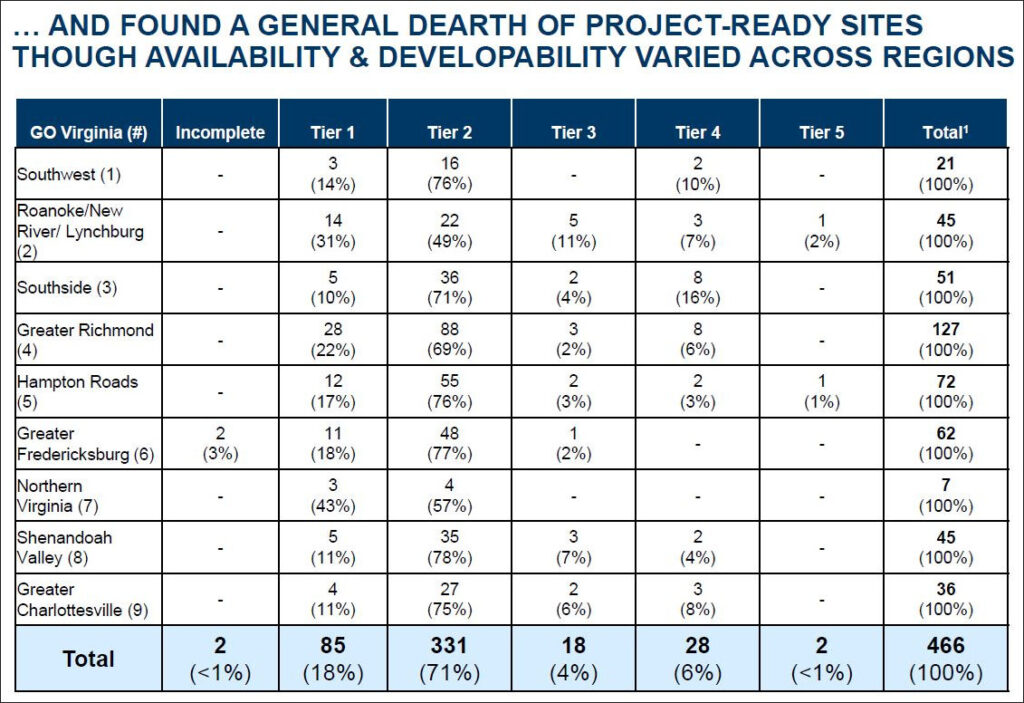 On average the cost to make a site project ready is about $4.6 million, according to Moret’s presentation.

Numerous funding pools exist for making site improvements, but most have restrictions on the types of costs they can cover — utility right-of-way acquisition, power line extension, road and rail access, and region-specific projects, and so forth. There are two programs with programmatic flexibility — the Virginia Business Ready Sites Program and Go Virginia economic development grants.

Building an inventory of project-ready sites is one of Moret’s top priorities. The VEDP chief is asking for $15 million to bolster site readiness in the next two-year budget, reports the Richmond Times-Dispatch. The GO Virginia board unanimously adopted a policy to broaden the grants it administers to increase the number of sites ready for development in 12 to 18 months.

Bacon’s bottom line: Cynics might say that Moret joins a long line of special pleaders begging for more money in next year’s budget. There are several important differences between Moret’s request and others. First, he has thoroughly documented and analyzed the need for the funds. Second, there will be tangible, measurable results. Lawmakers will be able to ascertain whether or not the expenditures are having the desired effect. Third, the $15 million is trivial compared to sums allocated to projects as “incentives.” Fourth, by putting Virginians to work and boosting investment, the initiative will increase the tax base rather than constitute a never-ending drain on the budget.

If Moret could demonstrate that spending more on site readiness would allow the state to spend less on incentives, he would have a slam-dunk case.