Northam Solves Mystery of the Man in Blackface 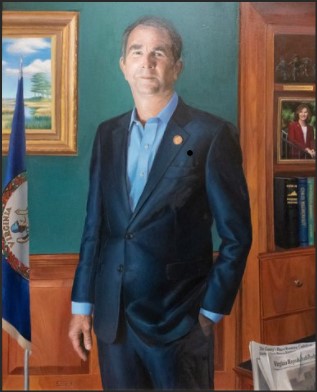 Yesterday, with just three days remaining in his term as governor, Ralph Northam unveiled the official portrait of himself.

Surely some practical joker behind the scenes was tempted to replace the commissioned painting with that well-known portrait of Northam in blackface standing beside a friend or date in a Klan hood.

Imagine the gasps when the assembled crowd might have seen an enlargement of the notorious black and white snapshot instead of the painting that truly is destined to hang somewhere in the Capitol beside images of Patrick Henry and Thomas Jefferson.

Alas, no pranksters on the scene, so it appears that everyone politely applauded at the likeness painted by Stanley Rayfield, a gifted 34-year-old Virginia portrait artist. His painting features a tieless Northam beside two newspapers with the headlines “Virginia Repeals Death Penalty” and “The Country’s Biggest Remaining Confederate Statue Comes Down in Virginia.” On the bookshelf behind the governor is a photo of Pam Northam and a leather-bound book titled, “Covid-19 Pandemic Response.”

I was honored to join Virginia artist Stanley Rayfield today to unveil the official gubernatorial portrait. This portrait pays homage to our nation-leading COVID-19 response, strong economy, and work to make Virginia more welcoming to all.

Thank you Stanley for a tremendous job! pic.twitter.com/wXIdXzPgVd

Why bother putting on a tie and standing up straight when you’re posing for a painting that will hang in a place of prominence for the next hundred years or so?

Speaking of photos, in a story headlined, “Gov. Northam says he’s 99% sure of the identity of the man in blackface,” The Daily Press reported that Northam’s tireless search for the man in the shoe polish was at an end.

Thank goodness. Some of us thought this would become another O.J. Simpson situation and we’d never know. Then again, on Feb. 1, 2019, Northam did admit that he was the minstrel in make-up sporting a jaunty fedora, but changed his story the next day. Eventually he just promised to find the culprit.

From The Daily Press:

Gov. Ralph Northam told The Washington Post that he is “99% sure” of the identity of the man who donned blackface in a photograph included on his medical school yearbook page ― a discovery that nearly derailed his governorship in 2019.

In a statement provided to The Virginian-Pilot and Daily Press, Northam’s office on Tuesday declined to name the man he believes wore blackface in the photo, which ran on Northam’s page in a 1984 Eastern Virginia Medical School yearbook.

But the governor told the Post in an article on Sunday that the man also attended the Norfolk medical school and has a name that’s alphabetically “very close to mine.”

“He’s been talked to,” Northam said in the recent exit interview with the Post about his four-year term. The man “was also in that medical school class,” he said.

The Post story did not explain how Northam is so sure of the man’s identity, given that the governor maintains that he wasn’t in the picture himself. Northam initially apologized for appearing in the photo “in a costume that is clearly racist and offensive” but later said he was not in the picture.

One has to wonder why an outgoing governor would feel the need to revisit an embarrassing three-year-old scandal, but that’s Northam for you.

I apologize for yet another post about Ralph Northam. He’s simply irresistible.

And we only have him for three more days.

This entry was posted in Scandals and tagged Kerry Dougherty. Bookmark the permalink.