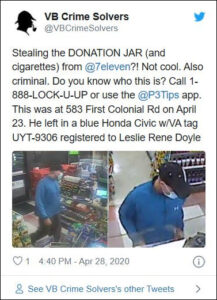 Have you ever longed to commit a crime, but hesitated because you feared being caught on a security camera?

You’re in luck. This pandemic couldn’t have come at a better time.

Just don a ballcap and some sort of mask — surgical, or better yet, a bandana — and your fears of being recognized as you indulge your inner thief will disappear.

If you’d walked into a convenience store all masked up two months ago, the clerk would have called the cops.

Now you can sashay through the doors disguised as just another virtuous citizen saving the world from COVID-19.

Check out the guy who’s wanted by the Virginia Beach police. He was in a 7-Eleven on First Colonial Road last Thursday where the cops say he brazenly stole cigarettes and emptied a donation jar.

Not exactly the crime of the century. Then again, those jars usually collect spare change for sick kids or orphaned dogs.

Who steals from them?

A guy in a surgical mask and ballcap, apparently.

We can all agree that pilfering during a pandemic takes advantage of the masky world we’re living in. But I doubt this loser will be the only one to figure out that widespread mask-wearing provides a certain, well, cover for criminals.

Meanwhile, the rest of us law-abiding types are still trying to get used to the idea of hiding our faces.

Wearing a mask is unnatural and uncomfortable. Plus, it’s disconcerting. We take our cues from the facial expressions of strangers. That disappears with a mask. A smile, a frown, pursed lips, all serve to communicate wordlessly with others. With that gone, we’re left alone in a sea of suspicious eyes.

As a result, congeniality seems to have vanished along with toilet paper. We’re all business now in the supermarket, grabbing our groceries and getting out.

Yes I have a mask. Or rather a bandana. I wear it inside shops where I may be closer than six feet to a stranger. I find it annoying and it fogs up my glasses. I rip it off the moment I’m out the door.

Which reminds me. Why are some people wearing masks while they drive alone in their cars? It not only looks ridiculous, it’s dangerous.

Perhaps you heard, a man in New Jersey got hypoxia last weekend from driving for hours in a car with a mask on. He passed out and hit a pole.

New flash: We need oxygen. Masks obstruct it. That’s why exercising in a mask is a bad idea. And driving in one is even dumber.

How quickly America moved from “wear a mask if you like,” to terrified people afraid to take them off.

Some shops and grocery stores are beginning to require masks – that’s preferable to the government edicts we all know are coming when our overlords finally lift the shutdowns – but the usual busybodies are already out, shaming and bullying the unmasked for their “selfishness”.

Give people a break.

After months of telling us that face coverings offered no protection against the coronavirus, the CDC changed its mind on April 3 recommending the voluntary use of masks, while noting that social distancing was far more important.

As I pointed out then, things have a way of morphing from voluntary to mandatory very quickly these days.

You want to know where this may be headed?

In an insane opinion piece on Sunday, “How To Save Summer 2020,” The New York Times actually suggested opening the beaches but requiring everyone to cover their faces.

On 90-degree days. In the scorching sun.

Please, no. Stop the madness.