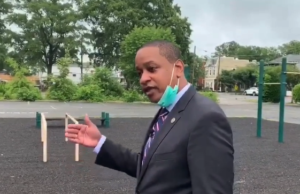 And so the campaign for the Democratic nomination for Virginia governor gains momentum… with a bidding war for who can spend the most money. Lieutenant Governor Justin Fairfax, one of five declared or likely Democratic candidates, has announced  plan to rebuild all public schools in Virginia that are more than 40 years old — an initiative that would cost the state $30 billion over ten years.

Traditionally, local governments in Virginia have assumed responsibility for financing the renovation and construction of schools. Some have lived up to that responsibility, and some have not. Henrico County, for example, imposed a new restaurant tax several years to fund new school construction. Fairfax’s plan for the Commonwealth to take over that obligation would reward localities that have failed to modernize their aging schools and punish those, like Henrico, that dug into taxpayer pockets to act proactively. Fairfax’s lesson to localities: shirk your responsibilities, drag your feet, and the state will bail you out.

But there’s an even more important issue at stake: Aside from a handful of school buildings that have seriously deteriorated, there is virtually zero correlation between the age of a school building and the academic achievement of the students who attend. If Fairfax wants to invest $30 billion to create better educational opportunities for young African-Americans, indiscriminately replacing school buildings more than 40 years old is just about the most extravagant, wasteful and poorly targeted idea I can imagine.

Four years ago my son graduated from Freeman High School in Henrico County. The building is 66 years old. The architectural style was ugly as hell, but, guess what, it was ugly as hell back in 1954 when it was built, too. So what? The interior has been well maintained. Apparently, the Henrico County school board allocated a sufficient sum to the maintenance of school buildings and grounds to allow Freeman to keep its roofs, windows, plumbing, ceilings, HVAC system, etc. in a state of good repair — and it has done so despite the fact that Henrico spends less per student than the neighboring City of Richmond, where the physical condition of the schools is a scandal.

Additionally, there is no mention in the RTD article that Fairfax’s plan would take into account the fact that many schools 40 years or older have undergone extensive renovations. Functionally, some of these schools are nearly as good as new. (And some have more memorable architecture.) It makes no sense whatsoever to replace them.

The single-most important factor affecting educational achievement that schools and school districts have control over is the quality of the teachers. In theory, Fairfax’s school plan would address that issue by raising average teacher pay in Virginia above the national average. A case can be made for raising teacher pay, although it is a weak one. Most teachers who leave the profession cite factors other than pay for their decision: in particular, relations with principals and administrators, and disruptions by students whom administrators cannot or will not discipline.

Another important factor affecting achievement is school discipline. On the premise that traditional methods created a school-to-prison pipeline, Virginia school systems have embraced a restorative-justice approach to maintaining order in classrooms. It may be too early to conclude decisively whether that approach is working or not, but the early signs were not encouraging when I addressed this topic a year ago.

Meanwhile, the Northam administration is doing everything its power to inculcate a social-justice consciousness in Virginia schools — an initiative enthusiastically embraced by many districts. Schools are expending significant resources to “eradicate racism,” in the words of state Superintendent of Instruction James F. Lane. “We must look at our policies, regulations, standards, resources, accountabilities, and all tools available to us to hold ourselves and our school communities accountable to ensuring that race cannot be a predictor of student success and thus, that achievement gaps are eliminated from our schools permanently.”

Lane’s unstated (and perhaps unacknowledged) premise is that African-American students have no agency. They are passive victims of racism. White-created power structures in school systems are responsible for achievement gaps, and the way to eliminate the achievement gaps is to change the power structures. It is not incumbent upon African-American students or families to change in any way. Fairfax’s $30 billion-for-new-schools initiative emerges from a similar social-justice world view.

With its commitment to “eradicating racism” by overhauling previous policies, regulations, and standards, and by dumping billions of dollars more into schools, Virginia is committing a giant social experiment. Ideally, at some point we will be able to evaluate the results: Does social justice + more money close the achievement gap, yes or no?

My analysis is that Northam is spending — and Fairfax would spend if elected — money on all the wrong things. My prediction is that the racial achievement gap will get worse, not better.

I’m not an ideologue. I’m willing to admit that I might be wrong. Unfortunately, the Northam administration seems committed to dilute the Standards of Learning exams, which, though far from perfect, do provide a yardstick for measuring academic achievement. Indeed, the exams were canceled this year because of the coronavirus, and who knows if they will be implemented next year? Without rigorous SOLs, there may be no way of ever knowing.