Justice at Last for Rojai Fentress

It would be entirely understandable if Rojai Fentress were angry and embittered by the miscarriage of justice that convicted him of a 1996 murder and kept him imprisoned until July of this year. But in a recent Encorepreneur Zoomcast, he expressed nothing but joy at his new-found freedom, gratitude toward those who had fought to liberate him, and enthusiasm for the new life that awaited him.

Fentriss and Deirdre Enright, a University of Virginia law school professor with the Innocence Project, described the flawed investigation, trial and conviction of the 16-year-old Fentress for the slaying of a white addict in a drug deal gone bad. He spent the next 24 years rotating through more than a half dozen institutions in the state prison system before establishing his innocence and winning a pardon.

When asked what it would take to compensate him for his experience, the gentle, sweet-tempered Fentress said, “I don’t regret a thing. I don’t think God makes mistakes.” He grew up in a tough neighborhood where many of his friends ended up dead. “The worst thing that happened to me turned out to be the best thing that ever happened.”

Fentress has gone to the Division of Motor Vehicles for a driver’s license, opened a bank account, applied for a job, and enrolled in a community college. He hopes one day to attend a four-year college.

Listening to Fentress is like entering a time warp. His spirit of hope and forgiveness seems totally out of step with the tenor of the times with its emphasis on grievance, victimhood, and reparations. If anyone can legitimately claim to be a victim of systemic racism in the criminal justice system, it is Fentress.

The shooting happened at Midlothian Village in South Richmond where Fentress lived. Two drug addicts, a white male and white female, conducted a drug transaction with a local dealer. The deal went awry and the dealer shot the white addict, Thomas Foley, who staggered off, was rushed to Chippenham Hospital, and died. The incident occurred during the crack epidemic and crime wave that made Richmond notorious as the city with one of the highest murder rates in the country, and law enforcement was under heavy pressure to put offenders behind bars. Someone talking to the police detective investigating the case (who, incidentally, was African-American) implicated Fentress. The Richmond prosecutor offered him a plea deal for five years, and his attorney urged him to accept it but he refused . He was innocent, he maintained. The female companion of the victim, Julie Howard, testified in a one-hour trial that she recognized him, and the jury convicted him. Upon hearing the verdict, he literally fainted.

The case also highlights the problems that poor people have with inadequate legal representation. Fentress said he saw his lawyer twice — first when his family retained him, and then again in court.

Fentress owes his liberation from prison to a fluke. He was incarcerated in the Keene Mountain Correctional Center in far southwest Virginia. In Virginia’s correctional system, inmates the same geographic area band together even if they didn’t know each other outside of prison — D.C. guys with D.C. guys, Tidewater guys with Tidewater guys, and so on. As a Richmonder, Fentress fell in with a man named DeAnthony Doane from Fairfield Court, a housing Richmond project. Doane bragged about the many crimes he’d committed. One day he was talking about a drunk white guy he’d shot. To Fentress, the incident sounded remarkably like the case for which he’d been convicted.

in 2014 Doane wrote an affidavit confessing to the shooting. He said he didn’t normally do business in Midlothian Village, and he wasn’t expecting two intoxicated white people. The “gun went off,” the white guy ran away, and he had no idea that he had died.

Armed with Doane’s confession, Fentress asked to be released. But he entered judicial hell. One judge heard his appeal but dismissed Doane’s affidavit on the grounds that convicts frequently confess to each others’ crimes. Fortunately for Fentress, the Innocence Project picked up his case. The UVa law students’ inquiries revealed several irregularities, including the fact that Foley’s female companion had lied about not being intoxicated the night of the killing and the fact that she had identified a person different from Fentress in a police line-up. The Innocence Project filed a request for a gubernatorial pardon from Governor Terry McAuliffe in 2017. Three years later, Governor Ralph Northam granted the pardon. 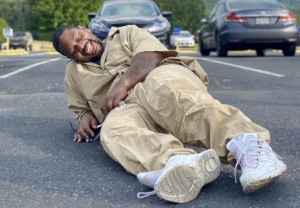 Fentress reacted to his release from prison by rolling on the ground in joy. Photo credit: The Innocence Project.

“This is so beautiful,” Fentress told Charlottesville Tomorrow. “I am in society. I am 40 years old. I am supposed to be able to produce and be able to function as a man. This is what life is supposed to be.”
UVa law students have started a “Support Rojai Fentress’s Freedom” page on GoFundMe. The fund has reached $60,000 of its $70,000 goal.

Bacon’s bottom line: Virginia’s criminal justice system is flawed. Innocent people get convicted, guilty people go free. We can hope that miscarriages of justice like this one are rarer now that the crack epidemic has subsided and the number of shootings and murders has declined since 1996, but as the military saying goes, hope is not a plan. I question the notion, held by many Virginia legislators, that reducing sentences and releasing people early from prison is an adequate answer. Letting guilty people go free does not help people who were wrongfully convicted. Rather, we should focus on efforts on making sure that no more innocents like Rojai Fentress, are imprisoned. Ever.

This entry was posted in Courts and law, Crime , corrections and law enforcement, Poverty & income gap, Race and race relations and tagged James A. Bacon. Bookmark the permalink.