Striking a Balance Between History and Diversity at VMI 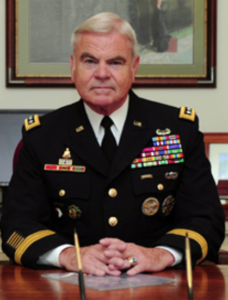 The Virginia Military institute will not purge monuments to Stonewall Jackson and VMI cadets who fought at the Battle of New Market, Superintendent J.H. Binford Peay III announced last week in a letter to the VMI community.

But the retired four-star general said the military college will intensify efforts to achieve diversity among staff and cadets, and it will alter its Cadet oath ceremony, which involves a reenactment on the New Market battlefield where VMI cadets helped win one of the last Confederate victories of the Civil War. In the future, he added, the college, which was founded in 1839, will emphasize recognition of leaders from its second century.

Peay justified retaining memorials to Jackson and the cadets who fought at New Market:

Unlike many communities who are grappling with icons of the past, VMI has direct ties to many of the historical figures that are the subject of the current unrest. Stonewall Jackson was a professor at VMI, a West Point graduate who served in combat in the Mexican War, a military genius, a staunch Christian, and yes, a Confederate General. Throughout the years, the primary focus on honoring VMI’s history has been to celebrate principles of honor, integrity, character, courage, service, and selflessness of those associated with the Institute. It is not to in anyway condone racism, much less slavery.

Peay said he wants to erase “any hint of racism” at VMI, and acknowledged that some African-American cadets and alumni have contacted him to say that “parts of the VMI experience did not live up to the standards that it should have.” He is committed, he said, to “fixing any areas of racial inequality at our school.”

In the letter, Peay elaborated upon the changes in VMI symbolism that will take place:

Meanwhile, VMI continues to develop its curriculum emphasizing American history and civics “within the context historically of national and world events, the Constitution, the Bill of Rights, and slavery.” Every cadet will take the “American Civic Experience” course. Also, wrote Peay, two courses on Virginia history will be reviewed “to ensure that they are taught with the proper context and from multiple perspectives.”

Bacon’s bottom line: As recently as a year ago, there was broad sentiment in Virginia to maintain traditions and monuments that celebrated enduring virtues — honor, integrity, character, courage, service, and selflessness — while placing the memorials in their historical context. Outside of VMI, there appears to be little appetite today for the view that one can honor the personal virtues of extraordinary men without honoring – indeed, while disapproving of — the slave-holding society in which they lived. Sadly, such nuanced thinking appears to be beyond the capacity of our intelligentsia, which views the world in increasingly Manichean terms. Some will see Binford Peay and the VMI board as hopeless anachronisms. If our society ever rejects identitarian politics and re-embraces the cultivation of personal virtue, history will treat them more kindly