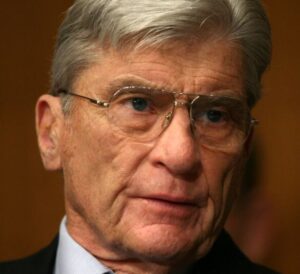 John Warner, who died Tuesday at the age of 94, was an accidental senator.

Had it not been for the plane crash that killed Republican candidate for the U.S. Senate Richard Obenshain in August of 1978, Warner would have simply been a former Secretary of the Navy who came in second in a bid to get the GOP nomination that year.

When the small plane went down with the candidate on board, Warner found himself the party’s nominee.

He was an outsider. But it turned out the man from Middleburg held a trump card:

Warner had married one of the most famous women in the world two years earlier and she took to being a candidate’s wife as if it were her most important role.

She barnstormed the commonwealth by Warner’s side, disarming voters with her warmth and energy.

Taylor electrified the campaign trail that fall, followed everywhere by an international posse of reporters and photographers.

Never before had the hollows and hamlets of Virginia been graced by a celebrity of Taylor’s stature. She packed high school football stadiums, greasy spoons and town halls in her starring role as candidate’s wife.

In fact, best-selling author Adriana Trigiani set her novel “Big Stone Gap” in the Virginia town of the same name and in the same year, because it’s where Taylor famously choked on a chicken bone as she sampled a wing in the kitchen of a restaurant.

Four years later, in 1982, Warner and Taylor divorced. I read an interview with her some years later and she spoke affectionately of  Warner, but said she hadn’t prepared to sit home night after night while John put in long hours on Capitol Hill.

In his three decades in the Senate, Warner quickly went from being a novelty — a celebrity husband — to one of Washington’s most powerful and respected senators. His work ethic was legendary, he rarely missed a vote, he made friends across the aisle, was a fierce defender of the military and protective of Virginia’s installations when the Pentagon embarked on consolidation.

The enormously popular Warner served five terms until his retirement in 2008. He was one of the last World War II veterans in Congress.

I covered many John Warner events over the years. At every one, I waited for his “model senator” joke.

He liked to quip that people called him a model senator but he looked it up in the dictionary and it meant “a drastically reduced version of of the real thing.”

Never failed to get a laugh.

It was during the summer and fall of 1994 that I spent the most time with John Warner.

Don’t remember that year’s crazy contest for the U.S Senate in Virginia? Let me refresh your memory.

For a time it was a wild four-way race for the U.S. Senate seat held by Democrat Chuck Robb.

Lt. Col. Oliver North shocked old guard Republicans when he clinched the party’s nomination. But both candidates had problems. Robb was tainted by a naked-back-rub scandal and North by Iran-Contra.

So former Virginia Attorney General Marshall Coleman, a Republican, offered himself as an independent alternative to North.

Then former Gov. Doug Wilder, who was a Democrat but not a Robb fan, entered the race but dropped out before Election Day.

It was clear Warner didn’t believe Oliver North belonged in the U.S. Senate, but the senator’s endorsement of Coleman helped divide the Republican vote, handing Robb a slim victory with just a plurality of the vote.

I was covering that campaign, which is how I came to be standing in the Twins Ole Towne restaurant in Smithfield early one morning.

Coleman and Warner were kicking off a daylong blitz from the iconic establishment, and members of the media and townsfolk were crammed inside.

After shaking hands and signing autographs, Warner had a hankering for breakfast.

He saw a woman. He spied a notebook. He thought waitress.

So the senator turned to me and said something like, “Miss, I’ll have two eggs — over easy — sausage, whole wheat toast and coffee.”

I was about to head into the kitchen and fetch it for him when an aide with a sharp elbow told the senator he’d ordered breakfast from The Virginian-Pilot’s political columnist.

“Holy cow,” Warner exclaimed. “I’ve been campaigning 31 years and I think that’s one of the dumbest things I’ve ever done.”

“Not even close,” the aide quipped.

As we left the restaurant, Warner shouted to me from across the street.

“Young lady, I want to ride with you!” he called.

At the time I had a 6-year-old and a 4-year-old. My car was a sticky mess of Cheerios and spilled apple juice, hardly suitable for a U.S. Senator.

He was a fabulous raconteur. At one point he wanted to tell me something personal, but hesitated.

“Can we talk as two people?” he asked.

“As opposed to what?” I wisecracked.

And I did know. He wanted to go off the record. I told him to go ahead and frankly, his story was damned amusing.

No, I won’t share it with you. I gave the good senator my word.

We lost a great man this week.

John Warner was a proud Virginian and Virginians had every reason to be proud of him.