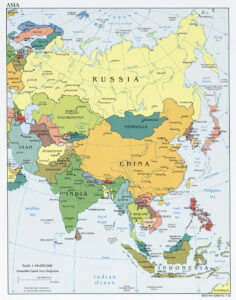 This is a continuation of the discussion raised by my column on the folly of educating Chinese and Iranian visa holders in Virginia universities and colleges. Some in that discussion thought soft power would overcome what America loses in hard power.

Soft power is both crucially important and utterly insufficient to guarantee the future freedom and prosperity of the West and its allies around the world.

Hampton Roads is the largest concentration of military power in the United States, perhaps the world. The Pentagon is in Arlington. Northern Virginia is awash in government and contractor defense personnel. But this issue directly affects all of America. And Europe. And South America and Africa, which are seeing overt Chinese attempts to influence events on both continents. And our allies in the Pacific.

China is without question the biggest long term military threat to the United States and its allies. It combines technology, economic power, an enormous and talented population and ruthless leaders.

When military strategists look at China they remember why the first strategic lesson taught in any strategy school is never fight a land war in mainland Asia. The United States and other western powers have occasionally forgotten that axiom to their considerable regret.

So how do we and our allies ensure military peace with China?

We do that by maintaining a modernized nuclear offensive capability, missile defense, and credible qualitative edges in conventional and unconventional warfare.

America has gone all in on both strategic and tactical missile defense for ourselves and our allies. That capability will always be threatened. But it better work. We are in trouble if we don’t stay ahead of the Chinese attempts to neutralize it.

When some strategists point to mutually assured destruction as a shield, remember that did not save the Soviet Union.

The Soviet alliance had nuclear weapons but we and our allies had both economic and conventional military capabilities that they could not overcome short of a nuclear exchange. And that proved no shield because the Soviets understood what mutual meant.

Mutually assured destruction may not stop the Chinese from using conventional and unconventional military capability in Asia because they may not believe we will play the nuclear card. And they may be right.

Look at a map.

Taiwan, the Philippines, South Korea and Japan are threatened by China’s conventional military power and its cyber capabilities close to their shores. Vietnam shares a land border.  Australia is farther away from China but much farther away from the U.S. and Europe.

And the Chinese may perceive a sufficient conventional and unconventional military edge close to home to decide to use it and accept the consequences.  The script is thus flipped from the Soviet cold war.

The Chinese hope that a credible threat alone may cause our allies in the region to shift defense policy. They haven’t yet. But China has tested and will continue to test their wills.

When China took over the South China Sea by creating artificial islands and militarizing them, they got away with it because we were not prepared to stop them.

The U.S. Navy now conducts freedom of navigation operations to keep the sea lanes open in now Chinese-claimed waters. That will work until the Chinese feel both strong enough and emboldened, which is different, to try to stop us.

If they invade Taiwan, America is pledged to try to stop them. But if the Chinese accept the very high costs of fighting the armed forces of Taiwan and its allies in a conventional war, they can probably win it. Distance matters. And America’s navy is not large enough and no longer has sufficient qualitative edge to dominate the seas and the air so close to China.

That is the direct result of the fact that Chinese scientists and engineers have for 40 years had the very best education and training America could provide and they have stolen what they did not develop.

So should we say game over, we are doomed to live without a military edge?

We will and do hear that theme from some influential and supposedly sophisticated Americans, mostly those with an internationalist view and big stakes in the Chinese economy.

But the rest of Americans really need to think long and hard if that is OK with us. No American has lived with military inferiority since before World War II.

We were isolationists before both world wars because enemy conventional forces could not reach us. That is still true, but key elements of our system of foreign alliances that buttresses our economy, tech industries and thus military capabilities is easily in China’s reach. And then there is cyber warfare. We have seen just his week that our cyber defense is not where it needs to be.

Unlike China, Iran is currently a wreck of a nation. But it is under the control of madmen that want nuclear armed missiles. The idiotic Iranian nuclear deal guaranteed they can have them. American trained Iranian scientists and engineers will help make it happen. Then so will the Saudis, who will find common cause with Israel. Both will depend on missile defense technology — ours and Israel’s.

The Soviets were not mad enough to use their nukes and I don’t think the Chinese are either. I don’t want to bet on the ayatollahs.

Based on my pre-Ayatollah exposure to Iranians, Iran’s people, freed of the tyranny under which they live, would form a nation that would be a stabilizing influence in that region.

We were not stupid enough to educate Warsaw Pact scientists and engineers. But we continue to make our universities available to the Chinese and Iranians. And, my God, do they take advantage.

Once the people of China and Iran throw off their threatening governments, we should educate them here. Until then, we should not.

This entry was posted in Defense, Education (higher ed) and tagged James Sherlock. Bookmark the permalink.