Northam Would Save Most of Virginia’s New Cash 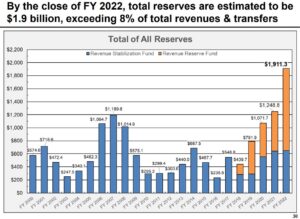 Source: Virginia DPB. Well, $1.9B is 8% of one year’s general fund revenue, but a fairly small cushion in a $141B two-year total budget. The blue lines represent the official Revenue Stabilization “Rainy Day” Fund and the orange lines are a cash reserve that represents legislative spending discipline.  (Who picked UVA colors?)

Other states are in trouble these days, but Virginia suddenly has about $1.5 billion in free cash flow to use over the next 18 months, Governor Ralph Northam announced Wednesday. About half of it ($750 million) will be placed into reserves or used to improve the financial health of the Virginia Retirement System.

The COVID-19 recession has certainly had an impact, reducing state spending, and adding unanticipated expenses. But the economic restrictions imposed here have not equaled those in other states, and the federal government has continued its spending on services and contracts in Virginia.

A series of pre-pandemic tax increases have also cushioned the blow, along with $3.3 billion sent to the state for COVID-related expenses.

In his speech to legislators assembled on Zoom, the Governor did not directly repeat the plea he issued in August for them to practice restraint and leave the cash in reserve. The budget adjustment he kicked off on August 18 was largely successful in that regard, with a series of amendments approved just a few weeks ago (November 18).  Today’s second round of amendments is also restrained.

By the end of Northam’s term, he and Secretary of Finance Aubrey Layne predicted, the state’s reserves will be just below $2 billion, or about 8% of one year’s revenues flowing into the General Fund. But as noted before, the General Fund is no longer the largest and hardly the only important part of the budget.  With the various non-general funds added in, the two-year spending projection is now $141 billion.

Compared to that, the reserves look less comforting. But many states right now are drawing down reserves, not adding to them. Not many governors around the U.S. are producing introduced budgets that have grown over the previous one.

For details, you can review Secretary Layne’s presentation here, and here is a set of slides from Director of Planning and Budget Dan Timberlake. Layne’s focus is mainly the revenue and the economy, and Timberlake focuses on the spending plans. The Governor’s Office issued this set of highlights.

When the crisis first hit ten months ago, the legislature had just adopted a budget spending $139 billion over two years, filled with new programs and spending increases. Most were quickly frozen, with some plans now relaxed by the first set of amendments and a few more items restored with this proposal.

The headline items include a two percent pay bonus in the second year, fiscal year 2022, for state employees and teachers. Both could convert to actual raises if the revenue projections hold. With school headcounts down due to virtual instruction, the state would normally send fewer dollars to localities, but Northam included $500 million in “no loss” funds to compensate.

Federal COVID relief funding runs out at the end of this month, and whether Congress will send more remains unknown. So, Northam included a couple of hundred million dollars to support the vaccinations and other health care efforts that had been funded by Washington. If Washington does come through with more state grants, some of those funds might be redirected later.

There is also $50 million directed toward restoring rail passenger service to Roanoke. That’s about it for a big new spending proposal. Beyond that, most of the new spending items are smaller dribs and drabs.

The most controversial may be to add four more judges to the 11 seats on the Court of Appeals, an idea already drawing fire from Republicans as “court packing.”

The off-year “short” session usually lasts 45 calendar days, ending in late February. Republican legislators have announced they will force compliance with the minimum session length of 30 calendar days, ending mid-February. That may be another reason the Governor limited his list of amendments, although it is still more than 200 individual changes.

The adjusted budget signed in November projected a continued shortfall in revenue of almost two percent. Instead, the state is running six percent ahead of its initial forecasts.  Sales tax revenues continue to exceed expectations, mainly because personal income has remained strong in Virginia and the state now captures tax on most on-line purchases.

Corporate income taxes continue to grow and should reach an unprecedented $2.5 billion over the biennium. This is largely because Virginia followed the lead of Congress when it changed corporate taxes by eliminating numerous business deductions or subtractions. Congress then cut the federal tax rate, but Virginia left its six percent corporate tax rate in place, producing a windfall tax increase.

The explosive real estate market in this low-interest environment is also producing a bonanza of recordation taxes for the state, now over $1 billion for the biennium.

Layne announced that the Governor would propose that Virginia conform with some, but not all, of the tax provisions in the federal CARES Act adopting in response to COVID. Virginia would conform with the individual tax provisions and would treat forgiven PPP (Paycheck Protection Program) loans the same way as the IRS. But the PPP loan tax exemption is the only business-related provision Virginia will conform with.

The Governor would spend $12 million in the Department of Environmental Quality to better protect Virginia’s air, land, and water, and $13.5 million in water quality and agricultural best management practices (BMPs), bringing Virginia’s BMP investment to $35 million in FY2022, including new staff.  The Governor’s budget also invests $276,000 to enhance food safety in Virginia, and $521,000 to develop the hardwood forest habitat program.

There was no mention in his speech or the documents, upon first inspection, of the proposed Transportation and Climate Initiative compact with other northeastern states (admit it, we’re now a northeastern state). Other states are preparing to address it, and it is possible individual legislators may promote it if the Governor does not.  It would involve a major carbon tax on gasoline and diesel fuels, producing revenue in the second half of the second year of this budget.