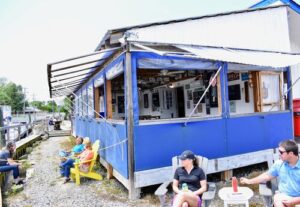 Like many Virginia restaurateurs, The Pepes were relieved when the governor finally allowed outdoor dining to resume earlier this month. The owners of several Peninsula eateries had been surviving on take-out orders since Gov. Ralph Northam’s executive order closed all Virginia restaurants in March.

They reopened The Barking Dog at the Sunset Creek Marina two weeks ago. It’s a casual, open-air burger and dog joint with a roof, picnic tables, benches with backs along the perimeter and zippered sailcloth windows that roll up.

More tent than than restaurant.

But some insufferable busybody reported them to authorities, claiming that The Barking Dog was an indoor restaurant and that the owners were violating the governor’s idiotic ban on indoor dining.

Which raises the question: WHAT THE HELL IS WRONG WITH PEOPLE?

An apparatchik from the Hampton-Peninsula Health District was more than happy to head to The Barking Dog on Thursday afternoon to put an end to any dining experience that wasn’t completely exposed to the elements. Once there he spied six people dining at three separate picnic tables, all socially distanced. He immediately announced that the restaurant was closed.

Almost as if he’d been watching “Casablanca”  to learn how it’s done.

“I told her to box up their food and comp their tabs,” Ms. Pepe told me. “I was told the health inspector were unpleasant. He told the waitress we weren’t allowed to have customers under a roof.”

No eating under a roof. There’s a common-sense rule for you.

An official with the health district admitted to The Daily Press that the agent’s technique had been heavy-handed. He said the diners should have been permitted to finish eating before the restaurant was closed.

This is how health officials are interpreting the governor’s decree? Is the entire state and every single agency suddenly run by knuckleheaded knob turners?

“We’re an outdoor restaurant,” Cara Pepe insisted. “We have no air conditioning or heat. It’s hot in there in the summer and in the winter people have to wear their coats. This is just a covered deck.”

The Pepes are angry. And they have every right to be. They’ve now put a few tables on the dock. When it rains, their business evaporates.

Everywhere you go in Tidewater, restaurant owners are trying desperately to keep their businesses afloat. They’re nothing if not inventive. Many owners have set up tents in parking lots to try to comply with the governors idiotic order. Others have slapped tables on sidewalks and parking lots.

But bad weather, like the rain that’s plagued the area for two weeks, is hampering even that.

Many of these folks have worked for years in the tough restaurant industry only to see the governor’s tyrannical edicts destroy their businesses.

Let’s be honest, the behavior of the health district last week had nothing to do with health or with protecting the community from Covid-19.

It was about power. And control.

This sort of bullying borders on harassment of already beleaguered small businesses.

This entry was posted in Health Care, Regulation and tagged COVID-19, James A. Bacon. Bookmark the permalink.