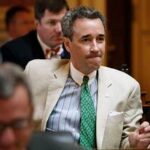 When I saw yesterday’s headline in The Washington Post, I was shocked:

I wasn’t surprised that Morrissey’s in trouble. Heck, his entire checkered career has been a gift to Virginia’s newsaper columnists. I wrote about him several times and, frankly, the fiery Democrat was a terrific interview.

Not shy, highly quotable. Everything a columnist could ask for in one colorful bundle.

There was that courtroom fistfight that earned him the nickname “Fightin’ Joe” when he was Richmond’s commonwealth’s attorney in the 1991. Then there was the 2015 session of the House of Delegates, when he commuted to the Capitol from the Henrico County Jail where he was on work release for a misdemeanor conviction for contributing to the delinquency of a minor (his 17-year-old receptionist, whom he later married.) If he crossed his legs just right you couldn’t see his ankle bracelet.

So no, I wasn’t surprised that now-Senator Morrissey is in hot water. I was simply astonished at how quickly charges were brought against him. After all, Election Day was little more than a month ago. These cases usually get to court when the election is far in the rear view mirror and everyone has lost interest.

(Anyone else remember the aide to Virginia Beach Mayor Will Sessoms who was indicted for campaign literature that lacked the required disclosure about who financed the material? The fliers in question were misleading. They showed Republican Sessoms with Barack Obama and were passed out in heavily African-American precincts as if the two were pals. The election was in November of 2008, the indictment came in April of 2009. The aide pleaded guilty and paid a $2,500 fine. Big deal. No one cared by then.)

I read The Washington Post story and learned that Morrissey is charged with three misdemeanors for allegedly violating election laws in 2019 — ONE YEAR AGO — when he allegedly sashayed into a Richmond polling place armed with a box of Krispy Kremes and posed for photos with poll workers. He’s accused of violating Code of Virginia Section 24.2-604, which bans campaign activities within 40 feet of a polling place.

Shoot, there are photos of Morrissey inside the polling place, cradling his doughnuts, surrounded by adoring poll workers.

If this was an illegal doughnut distribution, what took the authorities so long to bring charges?

“I’ve read the statute, I read the summons, it’s specious,” Morrissey declared, according to WRIC, Richmond’s ABC affiliate. “I am shocked that Attorney General Herring would use the resource of his office when people are dying of COVID-19, losing their jobs, losing their homes, having a hard time feeding the public to prosecute the donut delivery man.

“People asked to take pictures with me. What am I supposed to say, you know? ‘No?’” Morrissey asked.

Morrissey would never decline a photo op. That’s for sure.

The 63-year-old state senator is probably right. Very little happens in Richmond these days that isn’t steeped in politics.

Is it possible Herring also yearned for the flamboyant jailbird’s endorsement?

This entry was posted in Crime , corrections and law enforcement, General Assembly, Scandals. Bookmark the permalink.