Exploitation and Privilege at VCU 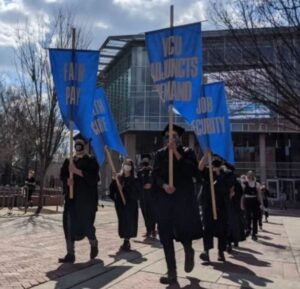 Bacon’s Rebellion has devoted considerable digital ink over the years to explaining how Virginia’s higher-ed institutions exploit its students through unconscionably high tuition and fees. But it is useful to remind ourselves that colleges and universities are rigidly hierarchical and exploit the knowledge workers at the bottom of that hierarchy as well.

Adjunct professors at Virginia Commonwealth University protested outside the office of President Michael Rao the other day, demanding better pay and benefits. Currently, an adjunct with a full teaching load makes about $20,000 a year, or about $1,000 per credit. They’re asking for $3,000 per credit.

“We want a raise to our base pay, which is currently low enough that an adjunct can work full-time and be below the poverty line,” said Rose Szabo, a member of VCU Adjuncts Organizing for Fair Pay in an interview with Virginia Public Media. Full-time-equivalent adjunct faculty don’t even get health benefits.

At VCU, like nearly all universities, tenured professors sit at the top of the faculty hierarchy, tenure-track professors underneath, non-tenure-track “instructors under them, and adjunct faculty members working on precarious, one-year contracts at the bottom. Faculty members at the top of the academic pyramid get paid more, have more job security, have lighter teaching duties, and enjoy benefits like sabbaticals and travel.

The hierarchy extends beyond the faculty. At VCU, like other institutions, senior administrators are the highest paid of all. in 2019 President Rao was the highest-paid state official in Virginia, earning compensation of more than $1 million. His salary has increased by more than $120,000 since 2017.

VCU spokesman Michael Porter told VPM that adjuncts’ base pay of $1,100 per credit represents an increase from $738 in 2017. While they may not receive health benefits, he added, adjuncts do have access to employee health service, a tuition benefit and professional development support.

In recent years VCU faculty and administrators have devoted considerable effort to pursuing “social justice” in race relations, overhauling curricula, renaming buildings and memorials, and generally expostulating about the need for “diversity, equity and inclusion.” In the realm of academic theory, cultural Marxists today are fixated on relationships of power based on race/ethnicity, sex, and gender identity. College administrators, like those at VCU, are all too willing to indulge that fetish. The more people focus on the evils of “white privilege” and “systemic racism,” the less attention they pay to the very real privileges enjoyed by senior faculty and administrators.