Ah, the Good Ol’ Days When a College Education Cost $235 a Year 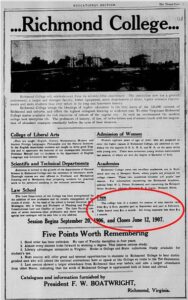 Responding to my frequent diatribes against the rising cost of college attendance, reader Carter Peaseley sent me this clipping from an old Richmond College advertisement in the Richmond Times-Dispatch, dating back to 1906. The tuition was $100 for a full year of study, and living expenses were $15 a month. Total cost of a year’s attendance (nine months of living expenses): $235.

Compare that to the cost of attendance at the University of Richmond today: $52,610 this year.

Admittedly, a dollar isn’t worth what it used to be. Indeed, if we use the Consumer Price Index calculator, we see that $235 in 1913 (which is as far back as the calculator goes) is the equivalent of about $6,300 today. So, to be fair, the inflation-adjusted cost of a college education at UR has increased only eight-fold over the past century, not 200-fold.

I suppose one can argue that students get more for their money these days. UR has handsome buildings and a beautiful campus. That $52,610 tuition, fees, room and board also helps pay for a lot of financial aid. Only affluent families pay the full price. UR, which has gone co-ed since its early days as a women’s college, has basketball and football programs, and I daresay that its living accommodations and food plans are superior. However, the main reason to attend college is to learn. Are students today learning eight times as much?

It would be an interesting exercise for some archivist to delve into UR’s old records to examine the size of the college bureaucracy in 1906. I’ll bet that the cost structure was a lot leaner and meaner back then.