Could the Low Testing Numbers Be Telling Us that COVID-19 Is Receding?

Just a couple of weeks ago — under surreal COVID time, who knows how long ago it really was — Governor Ralph Northam told Virginians that he wanted to see 10,000 or more tests per day before relaxing his Vulcan Death Grip on the state economy. With the exception of a single day, a statistical anomaly caused by a catch-up in the reporting of data, Virginia has fallen short of that 10,000 benchmark. Thankfully, the Governor has ignored his own dictum and permitted a timid incremental rollback of his emergency restrictions — not enough to make a big difference, but a step in the right direction.

Judging by the time dedicated to the subject on cable television, there is a national mania for testing. More testing and contact tracing are absolutely imperative if we’re to get out of this COVID-19 mess alive. Perhaps that’s true. If it is, the Northam administration is falling on its face. Testing, rather than inching closer to that 10,000 threshhold over the past couple of weeks, has been trending down, as can be seen plainly in this chart. 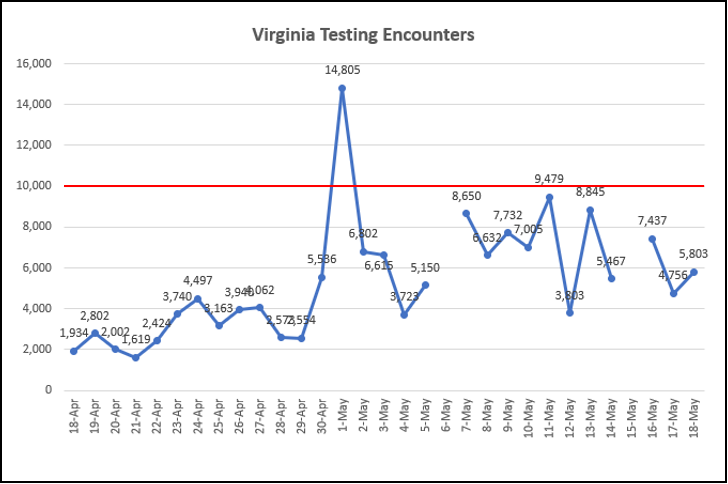 Counting the number of tests is more difficult than one would think. For a long time, the Virginia Department of Health was not capturing tests performed by private labs. More recently, it backtracked on lumping together antibody tests with RNA tests. Whatever the case, it is clear that Virginia has yet to reach the 10,000 benchmark.

Here’s the point where readers no doubt expect me to lambaste the Northam team for another administrative failure. I hate to disappoint, but disappoint I must.

Clearly, the Northam COVID-19 team got off to a slow start in (a) ramping up testing capacity by state hospitals and the state lab, and (b) integrating the tests of private labs into its database. But we’ve moved beyond that now. Those wrinkles have been ironed out. And we’re still nowhere near 10,000 tests per day.

The state lab and hospitals don’t test the population at random. They reserve their capacity for high priorities such as patients admitted to hospitals, front-line medical workers, and people confined to congregate communities such as nursing homes and prisons — as they should.

A better measure of “community spread” — the prevalence of the virus in the general population — comes from private lab tests. These tests come at the request of doctors responding to patients with flu or COVID-like symptoms or businesses testing employees to safeguard the workplace. This is not a purely random sampling either, but it’s more random than what’s coming from the state labs and hospitals. My conjecture is that the decline in the number of daily tests overall may reflect a decline in this population-at-large testing.

In theory, this proposition should be easy to confirm or rebut. All it would take is for the Virginia Department of Health to distinguish between the number of private lab tests and public lab tests. There is no shortage of private lab testing capacity. If the number of tests generated by private labs is shrinking, then almost certainly the reason is that the prevalence of the virus in the general population is receding.

That would be a good thing to know.

One would think it would be in the Northam administration’s self interest to find out. The inability to meet the 10,000-test threshhold could be politically embarrassment. Republican legislators could portray it as another failure of an inept administration. But if the reason for the stalling testing numbers is that the virus is receding, the Northamites would have a ready-made excuse, and the Governor could declare that his policies are, in fact, working. And the groundwork would be laid for moving to Phase 2 of withdrawing the Vulcan Death Grip, which is far more important than the scoring of political points.

42 responses to “Could the Low Testing Numbers Be Telling Us that COVID-19 Is Receding?”