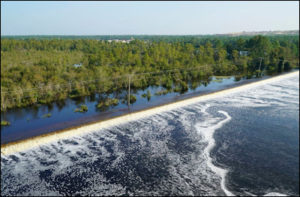 Flood waters from Hurricane Florence spilled over an earthen dike at Sutton Lake at the L.V. Sutton Power Station.

Last month pounding rains from Hurricane Florence eroded a Duke Energy landfill, releasing some 2,000 cubic yards of soil and coal ash. Although Duke declared that the majority of displaced ash was collected in a ditch and haul road surrounding the landfill, North Carolina news media reported the “possible release” of material into the L.V. Sutton Power Plant cooling lake. Later, floodwaters from the Cape Fear River inundated the power station with a foot of water in places.

Environmentalists emphasized the danger of Duke’s practice of disposing of coal ash near waterways throughout North and South Carolina. “After this storm, we hope that Duke Energy will commit itself to removing its ash from all its unlined waterfront pits and, if it refuses, that the state of North Carolina will require it to remove the ash from these unlined pits,” said a Southern Environmental Law Center spokesman.

As I predicted here, the incident was sure to impact the debate over coal ash disposal in Virginia. And it has. The headline to a Richmond Times-Dispatch article today tells the tale: “Hurricane’s lessons add pressure for solution to Dominion coal-ash storage.”

Hurricane Florence “punished North Carolina and swamped at least one utility coal ash storage pond in its path next to the Cape Fear River,” stated the article. Then followed a quote from SELC attorney Nathan Benforado during a hearing of a General Assembly Labor and Commerce subcommittee: “Hurricane Florence is a wake-up call.”

A wake-up call? Benforado does have a point. Regulators need to consider the dangers of rare but recurring extreme weather events for coal ash disposal just as they do for electric grid planning. But a lot of relevant material didn’t make it into the Times-Dispatch article. Virginians need to know… the rest of the story.

First the background: The General Assembly subcommittee is studying how Dominion Energy Virginia should dispose of 27 million cubic yards of coal ash buried in ponds and pits at four of its coal-fired power plants: Possum Point, Bremo, Chesterfield, and Chesapeake. Under old Environmental Protection Agency (EPA) regulations, Dominion had dumped the coal combustion residue into large pits and mixed the material with water to keep down fugitive dust. After two major spills at other locations, including one at a Duke facility, the EPA wrote new regulations designed to prevent more spills. Dominion proposed de-watering its coal ash, consolidating the material into a single pit at each facility, and capping the pits with a synthetic liner to keep off rainwater.

SELC has raised at least two sets of concerns about the Dominion proposal. First, says the environmental group, there is nothing to prevent underground water from migrating through the ash pits, collecting heavy metals leached from the ash, and reaching public waters. Second, the proposed pits are located close to public waterways, hence they are vulnerable to erosion or inundation during extreme weather events like Hurricane Florence. SELC wants Dominion to remove the coal ash by truck or rail and bury it in lined landfills on higher ground. Dominion has said that the SELC proposal could cost billions of dollars. SELC has responded that recycling the ash into cement and cinderblocks could cut the cost dramatically. Dominion is now evaluating that alternative.

So, what exactly happened at Duke’s Sutton plant? Did the spillage and inundation create a human or environmental hazard? And knowing that conditions at each power plant are unique, is Sutton comparable to any of Dominion’s power plants? What lessons can we extract?

At Sutton the company had extracted four million tons of coal ash for placement in a landfill — precisely the solution the SELC and other environmental groups had called for. About three million tons remained when the hurricane hit. Norton described the scene as an “active construction site” and, thus, more vulnerable than the cap-in-place arrangement it has proposed for some of its other facilities. Pounding hurricane rain eroded the containment berm, releasing coal ash equivalent in volume to two-thirds that of an Olympic swimming pool. Flood waters from a swollen Cape Fear River also inundated the cooling lake  and overtopped a steel wall erected as a temporary structure. Other than the landfill erosion, however, the coal ash remained stable and the waters receded.

Water samples taken from the Cape Fear River showed that the floodwaters had washed away some “cenospheres,” lightweight, hollow beads comprised of alumina and silica that are environmentally benign, but not the heavier combustion residue which contains potentially toxic heavy metals. None of Duke’s tests found heavy metals in the water that exceeded state safety standards. Independent tests conducted by the North Carolina Department of Environmental Quality came to the same conclusion.

At the H.F. Lee power plant site, the coal ash basins had been inactive so long that they had grown over with forest. These basins also were inundated by floodwaters but Duke and NCDEQ tests have shown no heavy metal levels exceeding state safety standards.

The coal ash at both Sutton and H.F. Lee was sitting in storage basins built in accordance with the old EPA regulations. Duke was in the process of complying with the new regs at Sutton and had slated H.F. Lee for future action. Neither facility resembled the cap-in-place proposals that Duke prefers for some of its coal ash ponds and that Dominion also prefers for its power stations. With the cap-in-place solution, the coal ash is first de-watered, largely eliminating any additional threat of groundwater contamination, and buried on the property. An impermeable synthetic liner placed on top of the ash pit prevents infiltration by rainwater.

Benforado conceded that the Sutton incident may not be applicable to either Dominion’s Bremo or Possum Point power stations where the coal ash is being placed in pits at higher elevations than the nearby James and Potomac rivers. But he said the conditions are comparable to Dominion’s low-lying Chesterfield and Chesapeake plants. Impermeable caps on the coal ash pits would prevent rainwater from waterlogging the coal ash, but he said they would not prevent erosion of berms on the perimeter.

Bacon’s bottom line: Given the experience of the Sutton and H.F. Lee plants in North Carolina, we know that hurricanes can erode and inundate low-lying coal ash pits. But we should not leap to conclusions. At Sutton, Duke Energy was removing coal ash to another location — just as environmentalists desired — leaving the remaining ash ponds exposed and vulnerable to rainfall of historic proportions. Duke’s largest coal ash basins would take “decades” to excavate, says Norton. Capping them in place would significantly reduce their vulnerability and lower the risk of spillage.

There is no ideal, once-size-fits-all remedy for the long-term disposal of coal ash. Each site has unique geological and engineering considerations. Every solution involves trade-offs between cost and risk. Virginia legislators and regulators need to take those realities into account.