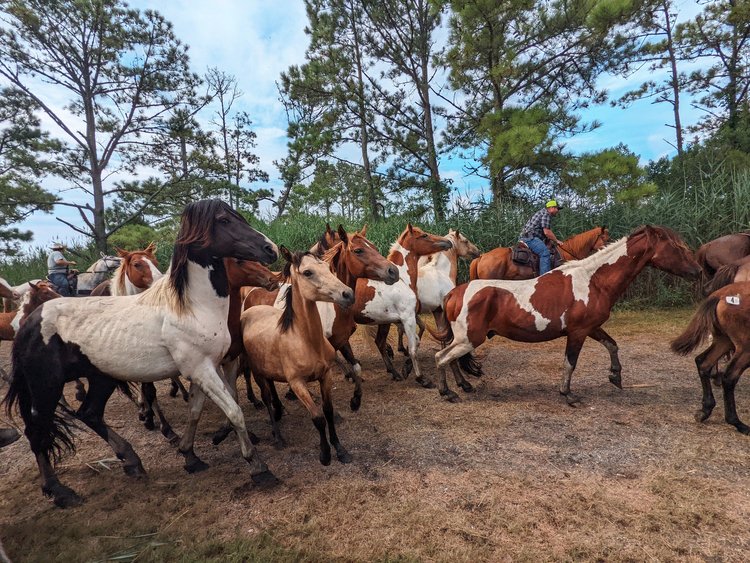 When we began this website in December of 2017 we promised that there would be no days off. That didn’t mean we’d never leave town. It meant that when we did we’d take you with us.

So, get out your bug spray and boots and join us for the annual Chincoteague Pony Penning, held every year on the last consecutive Wednesday and Thursday of July.

It’s a bucket list thing. Every woman I know who read “Misty of Chincoteague” as a girl wants to see the pony swim before she dies.

This is the power of literature on annual display in rural Virginia. A celebration of literacy with wild ponies!

So here we are in Chincoteague, Virginia. Famous for its herd of wild ponies and mosquitoes the size of silver dollars. 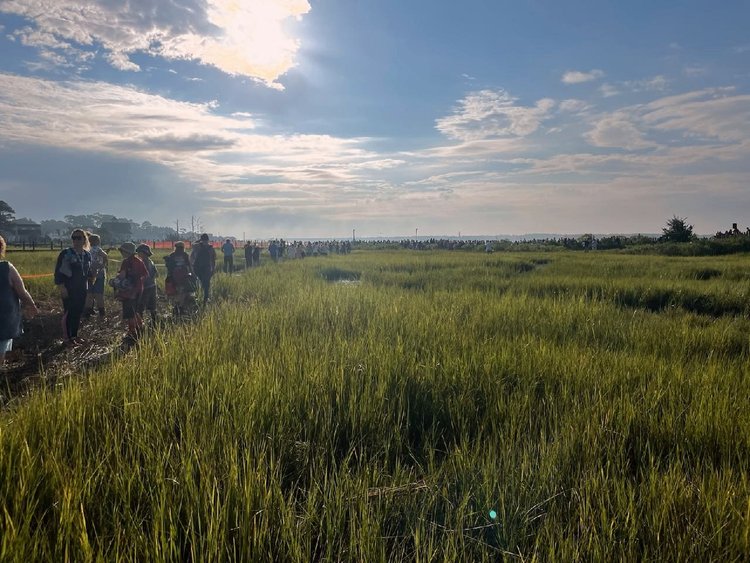 We were in good company. Governor Glenn Youngkin and his wife Suzanne made a surprise appearance that delighted the early risers.

The Youngkins were greeted with applause and cheers. Both smartly wore long — well longish — pants. We wore shorts. Bring a bucket of Calamine if you’re going to bare your legs in tidal flats.

This 98-year-old tradition began in 1924 when the Chincoteague volunteer firemen began rounding up the herd of wild Assateague Island ponies — the ones on the Virginia side — and swimming them across the channel to the sweet town of Chincoteague. Once there, the ponies are examined by veterinarians and given inoculations.

Some of the foals are put up for auction to control the size of the herd, which I’m told stays at around 150.

Proceeds from the festivities support the local volunteer fire company.

The pony swim was cancelled in 2020 and 2021 because we had a different governor who apparently believed covid was spread by ponies. He was so sciency.

The Chincoteague pony penning is famous around the world, thanks to Marguerite Henry’s beloved 1947 children’s novel, Misty of Chincoteague. I read the book when I was a horse-crazy girl and so did my daughter, but it wasn’t till we had a 6-year-old who also loved the tale that we decided to make the pilgrimage.

Once here on Tuesday afternoon we saw license plates from at least a dozen states including New York, New Jersey, Ohio, Pennsylvania, Kentucky, Alabama, Florida and Missouri. More than a few were towing empty horse trailers.

Before dawn on Wednesday, thousands of fearless people waded into the thick muck of the salt marshes for a first glance at the ponies as they set foot on land. The swim is at “slack tide” when the currents are weakest, which meant it began at about 9. 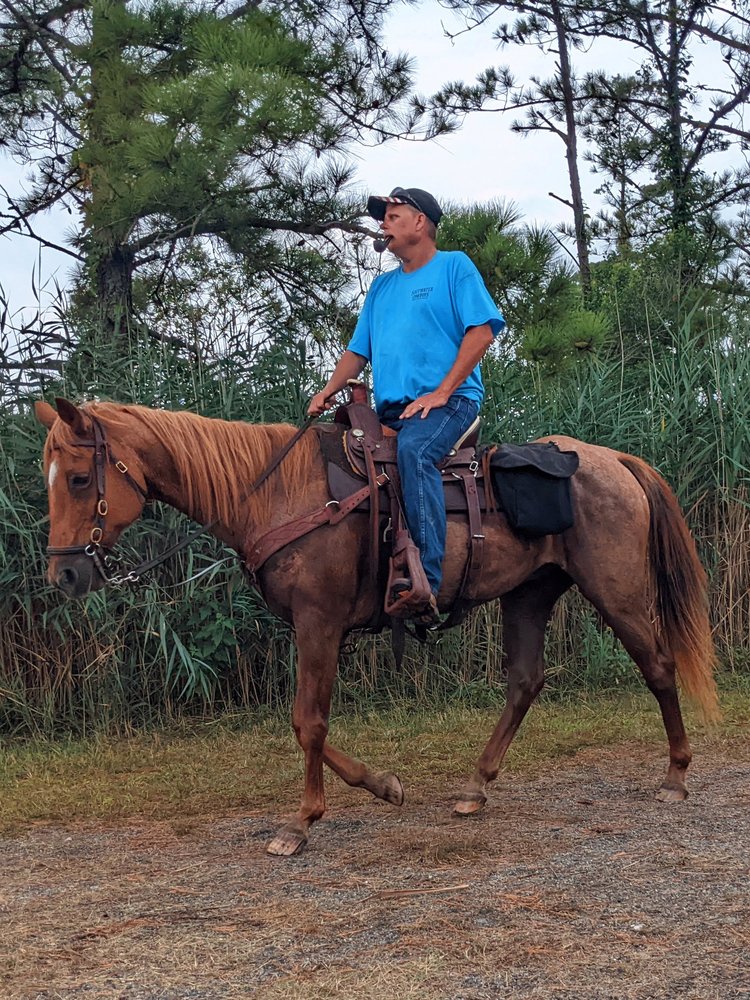 Chincoteague’s Saltwater Cowboys run the show. They round up the herd and get them into the water and guide the ponies through town to the carnival grounds. Several of the cowboys seem to have a fondness for pipe smoking.

We had an infant along who’s too young for mosquito spray so we waited near the paddock to get a glimpse of the wet ponies just after they emerged from the water and began their march through Chincoteague.

Sidewalks were lined with lawn chairs on Tuesday night as locals claimed the best spots to experience the equine drama.

While awaiting the stampede, we met the Patterson family from College Station, Texas. They’d traveled all the way to the Eastern Shore because their 8-year-old daughter is a Misty fan. She and her father waded through the swamp to watch the swim, while her mother and younger brothers waited near us.

The first foal ashore is dubbed King or Queen Neptune, depending on its sex, although I suppose a non-binary title is coming if the woke ones find their way to the Shore. That foal is raffled off at the firemen’s carnival Wednesday night, while many of the rest of the colts and fillies get new homes after the Thursday morning auction.

Of course, we bought raffle tickets.

“Where else can you get a pony for a dollar?” my granddaughter had pointed out.

So, I obediently opened my wallet.

And no, I don’t have a clue how we’re bringing a foal home in my daughter’s SUV in the unlikely case our number is called.

With her tickets in hand, our 6-year-old has spent the day deciding what she’ll name her colt.

She’s leaning toward “Lucky” or “Thunderbolt.”

I have a better idea: If we win, we’ll name our foal “Bruce Thompson,” the Virginia Beach developer who seems to get anything he wants.

That’s the only way city potentates might relent and let us keep a pony at the North End.

I’m writing this on Wednesday afternoon. The drawing is at 7:30 tonight at the Firemen’s carnival. I’ll keep you in suspense until tomorrow.

Chincoteague’s 2022 pony penning is over. On Friday the herd swam back to Assateague Island where it’ll stay until the last consecutive Wednesday and Thursday of July 2023.

A number of foals were left behind, however. They were sold at the pony auction Thursday morning. The proceeds of the sales go to the Chincoteague Volunteer Fire Department.

One of the highlights of the auction was the bidding for the “buy-back” ponies. Two lucky foals were selected to be auctioned purely for charity. The successful bidders got to name “their” foals and were photographed with them. But the youngsters returned to Assateague with the herd where they will live out their lives in the wild.

The first buy-back set a record: $30,000. And as I watched the bidder posing for a photograph with his filly I was touched by his extraordinary generosity.

At moments like that you’re reminded that America is full of good people, but too often governed by craven leaders.

This column has been republished with permission from Kerry: Unemployed & Unedited. Click here and here to see all the photos.