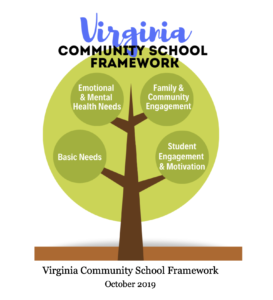 I believe a major approach to address both education and health care in Virginia’s inner cities is available if we will define it right and use it right.

The approach successful elsewhere brings government professional healthcare and social services and not-for-profit healthcare assets simultaneously to the schools and to the surrounding communities at a location centered around existing schools.

That model is a government and private not-for-profit services hub centered around schools in communities that need a lot of both. Lots of other goals fall into place and efficiencies are realized for both the community and the service providers if that is the approach.

That is not what Virginia has done in its 2019 Framework.

The rest of government and the not-for-profit sector are ignored and Virginia public schools are designed there to be increasingly responsible for things that they are not competent to do.

To see why, we only need to review the lists of persons who made up both the Advisory Committee and the Additional Contributors. Full of Ed.Ds and Ph.D’s in education, there was not a single person on either list with a job or career outside the field of education. END_OF_DOCUMENT_TOKEN_TO_BE_REPLACED 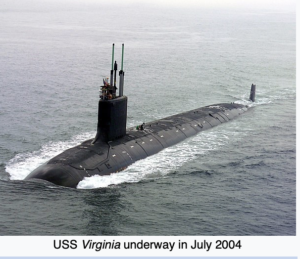 Upon investigation of open source literature, I find that offshore wind turbines are less noisy than I imagined. But they present obstacles nonetheless, both physically and acoustically.

United States submarine and anti-submarine efforts, operationally, in Navy labs, and in industry are led by some of our best and brightest.

That is true also, unfortunately, of most navies, including those of China and Russia.

The primary vulnerability of submarines is the noise they make, however minuscule. Submarine and antisubmarine technical and operational efforts are a constant cat-and-mouse game to minimize noise on the one hand and exploit it on the other.

The frequencies of the noise in the water from sea life, from shipping, from submarines and now from enormous turbine blades and the vibrations they cause in their supports are relatively discrete. That can help, or hinder, both submarine and anti-submarine warfare.

Turbines are typically grouped about 500 meters apart in wind farms and generate noise in the water from individual turbines and group effects. As a rule of thumb, the bigger the turbine blades, the higher the noise generated. Bad weather exacerbates noise conditions.

The waters off of Norfolk and the nation’s other major commercial and military ports are of primary concern here. We expect and hope that the Navy is at the table in the design and location of each turbine field. END_OF_DOCUMENT_TOKEN_TO_BE_REPLACED

On Sunday I asked the FOIA Council to provide an advisory opinion on the University of Virginia’s decision that information about that school’s threat assessment team deliberations in the case of the November shooter, Christopher Jones, will not be released as I requested.

I received the answer this afternoon, which is far quicker than I anticipated. The Council suggests a more binding route. I quote:

You also mentioned that the University indicated that redaction of these records would be so extensive as to effectively render them meaningless. You are correct that the threat assessment team information exemption requires that certain information be made available after certain types of incidents, and it would appear to apply to such threat assessment team records after an incident such as this one that resulted in student deaths.

However, the University is also correct that scholastic records are exempt from mandatory disclosure (and although the University did not appear to cite other provisions of law, note that certain student contact information is actually prohibited from release pursuant to subsection B of § 2.2-3705.4, and there are also various provisions of law outside of FOIA that may also affect access to student records).

It is possible that either or both of these exemptions could apply in different scenarios depending on the actual contents of the records, but without knowing those contents, it is not possible to render an informed opinion regarding whether these records are exempt from disclosure or must be produced.

To that end, you asked that this office review the 65 records withheld by the University in this matter and render an opinion based on that review. The Virginia Freedom of Information Advisory Council is a state legislative branch council that was created to issue opinions on the operation and application of the Freedom of Information Act (FOIA), to publish educational materials, and to provide training about FOIA. END_OF_DOCUMENT_TOKEN_TO_BE_REPLACED

Dead Students, UVa, and the Virginia Freedom of Information Act – Part One – Only One Client 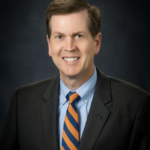 The deck is stacked against the press, at least in the first step.

The University of Virginia, unsurprisingly, considers it not in its interests to release information to the press about the work of its threat assessment team in the case of Christopher Darnell Jones.

The fact that this office also fields FOIA requests is and must be informed by that primary responsibility. That office will never knowingly break the law, but it will search it for provisions favorable to its client’s interest.

The office has only one client: the University.

Virginia’s FOIA law is dense. Most of its 48 pages are occupied with exceptions to the general duty to release information requested.

Agency attorneys are thus positioned to find an exception to repulse attempts at getting information that government agencies don’t want made public. Even if there is another part of that same law that arguably supports the request. The key modifier is “arguably.”

Such as information responsive to my FOIA request, which has been denied by the University Counsel’s office. I don’t blame them, I just disagree. They may prove right in the end. But the end is not yet here.

I will appeal to the FOIA Council, which contains Members of and works for the General Assembly. Different client.

If the information is ultimately to be released, we then will fight the next battle. Agencies get another bite of the apple. They get to make redactions they deem appropriate under the law.

The University’s FOIA office has done nothing wrong.

Rather, I find a structural problem with a FOIA system that requires the press to ask an agency’s defense attorneys for information inimical to the interests of their clients.  And then lets those same attorneys redact prior to release.

It cannot work in favor of the freedom of information, so it doesn’t.

I am going to publish a series about my takeaways from this experience.

That at least you can read about. END_OF_DOCUMENT_TOKEN_TO_BE_REPLACED