Prosecutors Who Won’t Do Their Jobs 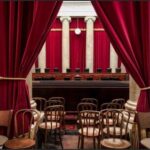 Two local prosecutors just earned an A in both Fearmongering 101 and Grandstanding 101.

Ramon Fatehi of Norfolk and Stephanie Morales of Portsmouth used the Supreme Court decision overturning Roe V Wade to summon the press and draw attention to, well, themselves.

The duo pronounced themselves “horrified” that the highest court would allow states to pass their own abortion laws — let’s give them each an F in Federalism 101 — and used the court decision to declare that they would not prosecute abortion crimes if the General Assembly passes new laws.

“Prosecuting those cases is directly contrary to my responsibility to keep people here in Norfolk safe and alive and I simply will not — I won’t allow the Republicans’ extremist agenda to put blood on my hands,” Fatehi told The Virginian-Pilot. “I will not aid and abet their endangering of people who are pregnant and who seek to end their pregnancies.”

Love the way this woke prosector used the idiotic “people who are pregnant” descriptor when he could have said “women.” Guess he’s seeking the men-can-have-babies vote in the next election. And his mention of keeping Norfolkians “alive” is rich in irony, given the topic.

In other words, these two commonwealth’s attorneys are announcing in advance that they won’t be doing their jobs, which is to enforce the laws of the commonwealth. Not just the ones they like.

Good to know. “People who vote” should take notice.

While Democrats maintain a single-vote majority in the state senate, Democratic State Sen. Joe Morrissey of Richmond has indicated he’d support a more restrictive law and could be the deciding vote in 2023.

Prosecutors who announce in advance that they won’t prosecute certain crimes are begging to be replaced with commonwealth’s attorneys who respect all laws.

This entry was posted in Abortion, Crime , corrections and law enforcement and tagged Kerry Dougherty. Bookmark the permalink.