Afghan Immigrants and Their Children in Virginia – Part 1 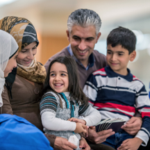 The flow of Afghan refugees into Virginia has been at a much higher volume than is generally appreciated.

The current total is far higher as a result of the Kabul airlift. A government survey reports that 41,000 of that group admitted to the U.S. settled in Texas, California and Virginia.

A significant majority of the Afghanis admitted between 2016 and the middle of 2021 have been granted Special Immigrant Visas and are lawful permanent residents.

Special Immigrant Visas (SIV) have been issued to those who took significant risks to support our military and civilian personnel in Afghanistan, were employed by or on behalf of the U.S. government or our coalition forces in Afghanistan, or are a family member of someone who did.

I think I speak for all Virginians when I welcome them and thank them for their service.

I have embarked on an effort to understand the numbers and impact of those refugees on our institutions, especially our public schools.

And our impact on them.

Virginia Refugee Program. It is a complex matrix of services, but a combination of federal supports and Virginia’s Refugee Resettlement Program supports refugees with social integration and economic integration support.

The VRRP is federally funded through the U.S. Department of Health and Human Services (HHS) Office of Refugee Resettlement (ORR).

Resettlement in Virginia is conducted by Refugee Resettlement Providers (RRP) currently under contract with the Virginia Department of Social Services (VDSS), Office of New Americans (ONA). RRP office locations are:

Refugees in Virginia are entitled to apply for the same benefits and services that are available to U.S. citizens.

Operation Allies Welcome. Operation Allies Welcome was established on August 29, 2021 to help the nearly 100,000 people airlifted out of Afghanistan pursuant to our withdrawal. As a reminder, I don’t have the exact number of those that settled in Virginia, but I have contacted the Virginia State Refugee Coordinator and will attempt to get it. It appears to be somewhere around 10,000.

That group was screened and vetted in foreign countries by U.S. Customs and Border Protection personnel.

SIV applicants and other vulnerable Afghan allies who were granted humanitarian parole were transported to U.S. military facilities where they received a full medical screening and a variety of services before moving onto their next destination.

DOD provided temporary housing facilities for them at eight installations:

So, they had been in the U.S. about six months after processing overseas.

Key Findings from heads of households.

Bottom line. Afghan refugees seem poised to make significant contributions to their new country. They gave us brave service, and we owe them thanks and a welcoming reception.

The heads of households are very well educated. If they are underemployed, perhaps we can organize a statewide effort to match them up with more skilled jobs. Perhaps some of them would like to become teachers or nurses. We need more of both.

As for their children, the school system in Afghanistan was not up to Western standards. I will try to determine the near-term impact on our schools. Especially in the most impacted districts.