The Post Office’s Explanation for This Makes No Sense 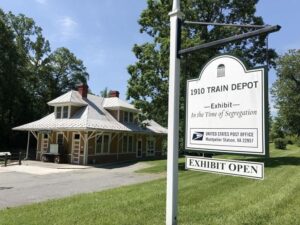 The United States Postal Service has shut down its Montpelier Station office because a display depicting racial segregation in Virginia was “unacceptable to the Postal Service.”

A brief history of the site is included in an article about the closure in the Culpeper Star-Exponent that is reprinted in today’s Richmond Times Dispatch.

In 1910, the wealthy industrialist William duPont, who had purchased Montpelier, the home of former President James Madison, and was living there, built a railroad depot on the property. Montpelier Station, as it was called, was served by the Southern Railroad. In accordance with custom and law, the station had separate waiting rooms and ticket windows for Black and White customers. In 1912, a post office opened in the same building and has been there since.

In 2010, the Montpelier Foundation, which now owns the mansion and surrounding property, restored the train depot. Included in the restoration is an exhibit that “tells of African American life in Orange County and the nation during segregation, as well as the train station’s peculiar history with the duPonts.” According to the article, the exhibit consists of “a panel on one exterior wall of the depot and on panels inside the 1912 station.” The post office had its own entrance, separate from the rooms in which the panels are shown.

In the first week of June, the Postal Office, with little advance notice, announced it was suspending service at the Montpelier Station office. Postal customers were given no explanation until a Postal Service spokesman told the Culpeper Star-Exponent on August 9, “Service at Montpelier Station was suspended after it was determined the display at the site was unacceptable to the Postal Service.”  The spokesman declined to answer follow-up questions about what the USPS found objectionable about the exhibit.

With the Postal Service facing well-known financial problems, it makes fiscal sense to close these small country post offices. They are quaint relics of a bygone era. However, to blame the closure on the presence of an exhibit about segregation that has been in the building for more than 10 years is bizarre.

This entry was posted in Efficiency in government, Uncategorized and tagged Dick Hall-Sizemore. Bookmark the permalink.