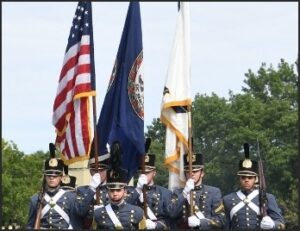 Virginia Military Institute cadets will return to class in a week or so. At some point during the semester, they will undergo a round of “Inclusive Excellence” training.

In June VMI’s chief diversity officer, Jamica Love, briefed the Diversity, Equity & Inclusion subcommittee of the Board of Visitors on what that training will look like. The verbal part of her presentation is not available to the public. But VMI has released an overview document that provides hints of what’s in store.

The central question in the minds of many alumni is just how “woke” the training will be. Will it be laden with leftist jargon and concepts? Will cadets be allowed to express themselves freely, or will the training amount to indoctrination? Will the training balkanize the student body around gender and race rather than mold cadets through the leveling process of the Rat Line and Barracks system into citizen soldiers?

Based on the “resources” cited in the document, “Inclusive Excellence Training VMI,” one thing is safe to say: the training content has been heavily influenced by left-wing currents of thought on issues of gender and race.

There has been a battle for VMI’s soul ever since former Governor Ralph Northam declared himself “appalled” by the systemic racism at VMI reported in a series of Washington Post articles, tossed out the old superintendent, J.H. Binford Peay III, and launched an investigation into alleged racism and sexism there. Decrying what they say amounts to institutional character assassination, conservative alumni have expressed concern that a leftist-inspired vision of Diversity, Equity & Inclusion (DEI) being implemented by Superintendent Cedric Wins and the Board of Visitors would exacerbate racial and gender conflict and undermine core VMI ideals of honor and character.

The previous VMI board, all of whose members were appointed by Northam, supported Wins’ DEI initiatives, but the tenor of board meetings is likely to change. This summer Governor Glenn Youngkin has appointed four new board members, including Meaghan Mobbs, an Afghanistan veteran whom the Biden administration asked, along with other Trump appointees, to resign from the board of West Point.

Superintendent Wins outlined his vision for VMI’s new direction in a 2021 document, “One Corps — One VMI.” Wins’ top three priorities were (in order): upholding the honor code, promoting diversity and inclusion, building young leaders of character. “Allegations of structural racism must be taken seriously. We must look at ourselves critically and ensure that VMI presents a welcoming environment to any young man or woman seeking the benefits of the VMI experience.” The document lists among its long-term actions “institutionalizing continuous diversity and inclusion training for Cadets, faculty and staff.”

Conflict with Youngkin first surfaced during the 2022 General Assembly session. VMI had requested a special appropriation of $6.1 million for new administrative positions, including that of DEI director and staff. Dissident VMI alumni objected to the appropriation, which they claimed — and the administration denied — would directly or indirectly fund several other DEI-related positions. After multiple rounds of budget negotiations, the appropriation was reduced to $3.7 million, and the Governor stipulated that the funds were “not for DEI,” according to Matt Daniel, director of the Spirit of VMI PAC.

(Update: VMI spokesman Bill Wyatt responds as follows, ” The governor did not stipulate that funds were “not for DEI.” Actually, the legislature included language in their enacted budget language (which was ultimately signed by the governor) stating that $3.7 million was designated for the One Corps initiatives related to Title IX, commandant’s staff, legal affairs, academic and student programs, compliance, and memorials. Matt Daniel assumes that since DEI is absent from that list, it means that none of the “new money” can be spent on DEI. The omission was not lost on VMI. However, the DEI office was fully funded prior to enactment of the budget, so it is truthful to say that the new money will not be used to fund the DEI office since it was already funded.)

In the absence of General Assembly appropriation of state funds, Love’s position has been paid for by a private donation or donations, an alumni source tells Bacon’s Rebellion. VMI began implementing DEI training sessions this spring. While attendance at the sessions was mandatory, the administration insisted that participation was voluntary. Critics countered that the sessions were structured in such a way as to make it difficult for cadets to decline to take part in a dialogue that was slanted against White males.

(Update: Wyatt says the DEI office is paid for by tuition and fee revenue, not private donations.)

Meanwhile, VMI had issued a Request for Proposal to hire an outside firm to conduct Diversity, Equity & Inclusion consultation and training. Among the services to be delivered was training relating to “cultural and identity oppression in the context of current culture as it relates to VMI.” In March the VMI selection committee issued a notice of intent to award the contract to NewPoint Strategies, a McLean-based diversity-training firm with hefty DEI credentials.

That award was disputed by a losing bidder, Center for Applied Innovation (CAI). The consulting firm had submitted a bid on the Northam administration’s racism-investigation contract the previous year and objected when it was awarded to the Barnes & Thornburg law firm. CAI’s principal, Bob Morris, also heads a foundation that supports an alternative student newspaper at VMI, The Cadet.

CAI’s lawsuit protesting the NewPoint strategies award has survived VMI’s attempt to dismiss it on the grounds that the academy is exempt from the Virginia Public Procurement Act (VPPA) and is protected by the doctrine of sovereign immunity. In his ruling, Judge Christopher B. Russell with the 25th Judicial Circuit of Virginia wrote that VMI “is prohibited from awarding the contract until the present action has been resolved.”

Blocked for the time being from hiring an outside firm, VMI is moving ahead on its own. The program, as presented to the Diversity subcommittee, will entail a 50-minute session each semester, implying a total of eight sessions for a cadet attending VMI for four years. “Fifty minutes of Inclusive Excellence Training represents less than half of one percent of cadets’ total academic time per semester,” says the  presentation.

(Update: Wyatt says cadets will attend two training sessions the first year and one each successive year, for a total of five.)

As elucidated by Love, this year’s training will focus on gender, LGBTQIA+, and racism. Sessions will include an interactive component, and cadet-created role playing. Additionally, the training will make available video clips of varying lengths. (It is not clear if these clips are meant are to be viewed as a formal part of the training or on the cadets’ own time.) Examples of the messages conveyed:

Bacon’s Rebellion was unable to access these videos, which are stored on a streaming service called “Kanopy,” which requires submission of an ID card with a participating library. I have been informed by one VMI alumnus who has seen a video, “Miss Representation,” that an animated section portrays a man bludgeoning a woman on the head with a hammer, and then on the ground when she goes down. Alumni are concerned that White men will be portrayed negatively on the basis of their race and gender.

For resources, the Inclusive Excellence document references 20 articles laden with leftist vocabulary and themes, including the following:

In her June presentation to the Diversity committee, Love spoke about this year’s class of cadet facilitators, “with 86% being female and 14% male,” according to the subcommittee minutes.

It is not clear if the full Board of Visitors will have an opportunity to address the DEI training program. The next board meeting is scheduled for September 19-21. No agenda has been posted yet.