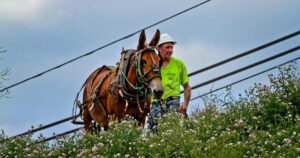 A tale of two places.  The next generation of consumer wireless technology is called Fifth Generation or 5G. It is being rolled out in select parts of the United States right now. 5G will be a boon to urban and suburban Virginia. Absent heavy government subsidies, it will likely have a minimal direct effect on rural Virginia. Of course, any technology that favors high population density areas over low population density areas expands the rural-urban gap. The reasons for 5G’s value in high density areas vs low density areas run the gamut from physics to economics. However, there are some engineering scenarios and demographic situations where 5G might be effective in select rural areas without massive governmental subsidies. Those will be discussed later in this post. And, of course, massive government subsidies are always on the table.

The promise of wireless broadband in rural Virginia. The allure of high bandwidth wireless communications (25 Mbps download speed/3 Mbps upload speed) is obvious. The costs of wired communications are extensive. Trenches need to be dug, conduit laid, wires or fibers pulled, etc. A good estimate of the cost range for fiber infrastructure is between $18,000 and $22,000 per mile. If there were a hundred homes along that one mile route the costs might be bearable. If there are four homes over the mile – probably not. But what if radio waves could be used to cover the ground instead of wires or fiber bundles? That would certainly cut the cost. Hence, the holy grail of broadband for rural areas often rides on vague hopes of wireless radio waves.

But higher frequency telecommunication comes at a cost. First, the chips and software have to be fast enough to send and receive information as fast as the frequency will allow or what’s the point? Second, wavelength matters. A wavelength of a periodic wave is the distance over which the wave’s shape repeats. At a given speed, such as the speed of light, the higher the frequency the shorter the wavelength. Aye, there’s the rub. Shorter wavelength waves travel shorter distances than longer wavelength waves. You can have speed or range but not both. Short wavelength (i.e. high frequency) waves are also are less effective at penetrating physical objects like the walls of a building. In the cellular industry, the solution to both problems is to build a lot of cell sites. Since the cost of cell sites is spread over the number of subscribers using the wireless service, there is a certain population density where high frequency, high bandwidth communications make economic sense. That population density is far higher than the densities usually associated with rural areas.

5G or 5Gs? 5G is the latest evolution of cellular communications. It uses new technology (hence the need for new 5G phones) to harness the speed of high frequency radio waves. As mentioned above, one cost of this high frequency communication is the need for lots of cell towers. In fact, “4G wavelengths have a range of about 10 miles. 5G wavelengths have a range of about 1,000 feet, not even 2% of 4G’s range”.  Telecommunications providers are not charities. They will not build out 5G infrastructure unless there’s a payback. That payback is a lot easier to get in high population density areas than in low density areas. So, will your shiny new 5G phone just stop working when you cross the Prince William/Stafford County line? No. But it will revert to much slower speed communication. Per Wikipedia, “5G networks operate on up to three frequency bands, low, medium, and high. A 5G network will be composed of networks of up to 3 different types of cells, each requiring different antennas, each type giving a different tradeoff of download speed vs. distance and service area. 5G cellphones and wireless devices will connect to the network through the highest speed antenna within range at their location.” Your 5G phone on your 5G plan might very well be operating at 4G speed once you leave the big city.

No joy in Mayberry. The optimism for 5G to bring wireless broadband to rural Virginia is probably a forlorn hope. It would take too many towers covering too few people to make economic sense. However, there are situations where it might help. For example, a small town exhibiting Jim Bacon’s nirvana of walkable urbanism might be an oasis of density in an underpopulated desert of fields and forest. That town could be quickly brought into the broadband age with a few 5G towers. The leasing of additional low density spectrum for the slow side of 5G might help reduce costs and make high speed (if not broadband speed) wireless data more practical in rural Virginia.

The physics of other people’s money. What physics and economics resist big government enables. The lubricant, as always, is money. Other people’s money. The FCC is hard at work on a $9B rural 5G fund that hopes to make high speed 5G cell towers as ubiquitous in rural America as those adorable rooster themed weather vanes. There’s more. As Fierce Wireless reports, “T-Mobile officially closed its merger with Sprint on Wednesday. As part of securing regulatory approval, T-Mobile pledged that within six years of closing, the combined company (which goes by T-Mobile) would deploy 5G service to 99% of the U.S. population, including 90% of those living in rural America at speeds of at least 50 Mbps.” The costs of this “free stuff through regulation” will be borne by those using the T-Mobile service.

Up next: What will 5G enable and how will that change Virginia?