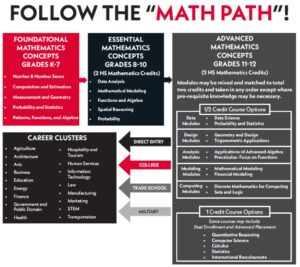 The Northam administration is working on what arguably is the biggest overhaul of the mathematics curriculum since the 19th century. The Virginia Mathematics Pathway Initiative (VMPI) would replace the classic progression of Algebra 1, Geometry, and Algebra 2 courses with classes that teach “essential” concepts. All students would take the same courses through the 10th grade but would be able to select courses in the 11th and 12th grades suitable to their post-graduation ambitions.

Proponents of the overhaul say it would promote educational “equity” — a code word for equal educational outcomes between racial and ethnic groups. But a movement has taken root among Northern Virginia parents who contend that by eliminating all accelerated math classes through 10th grade, the new “pathway” would hold back higher-achieving students.

The VMPI, which is in the advanced phases of development, is part of a larger equity-driven reengineering of public school curricula in Virginia, including the potential consolidation of “standard” and “advanced” high school diplomas.

Officials with the Virginia Department of Education, who are driving the process forward, cloak the changes with arcane bureaucratic language which is largely impenetrable to the public. Try reading this description on the VDOE website or, for a real treat, listen to this description delivered by Leslie Sale, director of the Office of Policy, to a bureaucratic entity called the Special Committee to Review the Standards of Accreditation. (Sale begins at 1:21:38 into the meeting.)

One thing is very clear: The impetus behind the curricular re-engineering is “equity,” reducing educational disparities between whites, blacks, Hispanics and Asians. And one thing is very unclear: exactly how the new math pathway would improve equity. No one spells it out.

Foes of the new pathway have concluded, not illogically, that the unstated purpose is to achieve equal outcomes by denying higher-achieving students the opportunity to advance at a faster pace. Ian Serotkin, a Loudoun County School Board member, detailed his concerns in a Facebook post:

As currently being planned, this initiative will eliminate ALL math acceleration prior to 11th grade. That is no an exaggeration, nor does there appear to be any discretion in how local districts implement this. ….

My first reaction to this was that it seemed absolutely bananas, and that it sets a soft cap on the number of higher math courses students are going to be able to take. My second reaction was to wonder which outside math learning franchises (Kaplan, Mathnasium, etc.) are publicly traded, because I foresee their stock soaring.

Sale began her presentation to the Standards of Accreditation Committee by providing some historical context. She presented a slide that compared graduation outcomes by diploma type and race/ethnicity. As can be seen in the image below, 79% Asian students graduated in 2019 with “advanced” diplomas, compared to 63% for whites, 45% for Hispanics, and 40% for blacks.

Addressing the equity implications for the different diploma types, Sale said, “There does continue to be a stark difference in which students are earning which diploma,” leading to “concerns about access to rigor, flexibility in course selection, and application and then systemic issues related to course placement.”

This murky bureaucratic language perhaps refers to claims made by Northam administration officials that Virginia’s public system is “systemically racist.” Some schools (serving whites and Asians) provide a wide array of accelerated and advanced courses, while other schools (serving minorities) don’t provide the same options. Thus, according to this line of thinking, many minorities students are denied access to college-prep opportunities.

In 2017, the School Board reduced the number of verified credits students needed to be awarded either a Standard or Advanced diploma, and began considering the idea of consolidating the two into a single diploma, the Virginia diploma. The Virginia diploma is still a work in progress, but it likely would require students to earn 25 course credits over four years, more than the Standard Diploma (22 credits) but less than the Advanced (26 credits).

Noting that 32 other states provide a single diploma, Sale said Virginia would be moving into the educational mainstream by eliminating the dual-diploma approach.

The diploma-consolidation initiative, Sale stressed, is only “conceptual” at this stage. However, the Virginia Mathematics Pathway Initiative, which applies the same thinking to the math curriculum, is well advanced. Indeed, VDOE officials are “vetting” the concept with various constituencies, including local school districts. The Martinsville Bulletin reports, based on VDOE officials’ meetings with Henry County educators, that teachers will start integrating the new standards into the curriculum in the 2024-25 school year. Full implementation is scheduled for the following year.

At no point did Sale explain how the new approach would advance the cause of educational equity without holding back high-achieving math students. Committee members danced around the issue in the Q&A session following the presentation.

“I think it will be one of the most transformational things we can do to advance equity,” said Leah Walker, director of equity and community for the Virginia Department of Education. But Walker, like Sale, declined to spell out exactly how minorities would benefit.

The only concerns expressed were that the new one-size-fits-all pathway might be too difficult for some students.

Anne B. Holton, a former Virginia Secretary of Education and now a Board of Education member, raised the possibility that the restructured math curriculum might make it harder for some students to meet graduation requirements. “The impetus behind the math pathways makes a lot of sense,” she said. But, “if we add an extra math requirement, and add other requirements to standard diplomas, some students who are just barely scraping now would have to pass a higher bar.”

Anthony Swann, a 5th grade teacher in Franklin County and a School Board member, expressed his reservations in language refreshingly free of bureaucratic cant. “I have some concerns as a teacher with increasing the math requirements. I believe that we should push students. However, there are some students who absolutely hate math. I’ve tutored high school students. After they’ve finished their third math course, barely scraping by, they’re glad to get it over with. If you give them another math course, it will change the mindset. …  Even teaching 5th grade math, I had a student who said, ‘I wish I could murder the person who created math.'”

The meeting was bizarre. Participants asked only a few, mostly technical questions. Sale responded with vague bureaucratic language. No one addressed the core underlying issue — advancing equity — in a substantive way. And not a single participant in the accreditation committee raised the issue on the minds of Northern Virginia parents: will the new math pathway hold back high-achieving math students?

The meeting was so lacking in dialogue that an outsider is compelled to wonder, is this all kabuki theater? Has the Northam administration made the decision to adopt the new pathway and is just going through the bureaucratic motions of “engaging” stakeholders? Will there be any serious debate over the most dramatic transformation of Virginia’s math curriculum in more than a century, or is the whole thing running on auto-pilot?