Oh, To Work for the Legislature

I learned a long time ago that one can come across some juicy nuggets by perusing the amendments to the budget bill. One such nugget I ran across today confirmed something else I have known for a long time: It is nice to work for the General Assembly; legislators take care of their own.

This was confirmed by a budget amendment that gives the chief of the Capitol Police a 22% salary increase for FY 2022. Next fiscal year, the chief will be making $200,000 per year. Last year, for the sake of comparison, the chief of police in Richmond’s salary was reported to be $185,000.

That got me to thinking about comparing the salaries of the heads of legislative agencies with their counterparts in the executive branch: 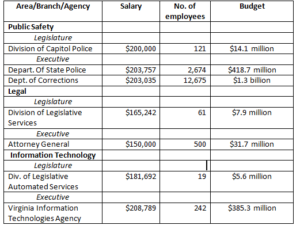 Draw your own conclusions.