What’s Worse for the Environment: Natural Gas or Rare-Earth Metals? 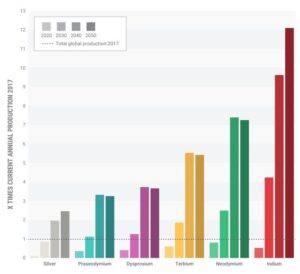 Tom Hadwin is one of the smartest, most well-informed commentators in Virginia on the subject of the electric grid, utility regulation and Dominion Virginia Energy. He sets a high standard for the discussion about energy policy in Virginia. He is calm, rational and fact-based, he refrains from ad hominem attacks and does not engage in partisan hysterics. It is a pleasure exchanging views with him, even when we disagree, and I would recommend readers with an interest in the future of the electric grid to read his thorough and thoughtful comments on Dominion’s 2020 Integrated Research Plan, which you can find below.

That said, Hadwin advances several propositions that are at best debatable. In this post, I wish to focus on one in particular: the way he frames his analysis to include the system-wide costs of drilling and distribution when calculating the environmental costs of natural gas and ignoring the system-wide costs of mining and processing rare-earth metals when calculating the environmental costs of solar panels and wind turbines.

Hadwin observes that many energy executives and financiers promoted natural gas as the “bridge fuel” to a clean energy future on the grounds that CO2 emissions from power-plant combustion are half that of coal. But he goes on to argue that it is not adequate to consider natural-gas combustion alone. One must take a holistic approach of natural gas drilling, fracking, and distribution as well as combustion. Writes Hadwin:

Firing generators with gas does reduce some of the problems associated with coal. However, producing gas using hydraulic fracturing has contaminated over one trillion gallons of fresh water. Climate risks have not been reduced by the shift to gas, according to peer-reviewed research. Methane leaks in the production zones, in storage locations, and along the pipeline transportation network offset the savings in CO2 releases that gas-fired plants offer. Twenty years after its release, methane is 86 times more potent as a greenhouse gas compared to CO2. Methane leaks have been measured and are greater than previously estimated. They are not large and many can be remedied, but a little methane goes a long way in contributing to climate effects.

Meeting the goals of the Paris climate accord would require the global production of some metals to grow by at least twelve-fold by 2050, says the report. The demand for neodymium, terbium, indium, dysprosium, and praseodymium stands out. Mining of these ores takes place in a few select countries, and refining is concentrated in even fewer countries. (One of them is China.) Supply cannot be expanded rapidly: opening a new mine takes 10 to 20 years.

More to the point of Hadwin’s argument, the study notes that “With ore grades declining, mining requires an increasing volume of water and energy. Furthermore, mining is often associated with significant environmental and social costs.”

The so-called rare-earth metals, of which there are 17, are not all that rare. The problem is that they do not appear in ores concentrated enough to extract economically. China accounts for 35% of the world’s reserves of rare earths and it has moved to obtain exclusive mining rights in African countries such as Kenya and the Democratic Republic of the Congo. Over and above the concerns arising from China’s control over supply, which it has used to bully other nations, are the environmental costs. Reports Earth.org:

It’s challenging to mine and process rare earths without harming the environment. The problems are related to the two primary extraction methods.

The first involves removing the topsoil, transporting it to a leaching pond, and adding chemicals (such as ammonium sulfate and ammonium chloride) to separate out the metals. The chemicals used in this separation process can create air pollution, cause erosion, and leach into groundwater.

The second processing method involves drilling holes into the ground, inserting PVC pipes and rubber hoses and pumping chemicals to flush out earth. The resulting slurry is then pumped into leaching ponds to separate out the rare-earth metal.

This method creates the same problems as with topsoil removal with the addition of the PVC pipes, rubber hoses and other sundry used by mining crews remaining littered in the mines.

Further, as the Manhattan Institute observes, forecasts count the quantity of refined, pure elements required (typically measured in pounds) rather than the amount of rock that must be extracted (typically measured in thousands of pounds). Because rare-earth metals do not appear in high-density concentrations, mining operations must extract, pulverize and refine a high volume of rock to yield a small volume of metal. Thus, a 1,000-pound electric-car battery requires the extraction and processing of some 500,000 pounds of materials. “Averaged over a battery’s life, each mile of driving an electric car ‘consumes’ five pounds of earth.” By contrast, an internal combustion engine consumes about 0.2 pounds of liquids per mile.

All that mining and processing has an energy cost.

Bottom line: One cannot consider the “supply-chain” costs of natural gas combustion without also considering the “supply-chain” cost associated with the fabrication of solar panels and wind turbines. I couldn’t find any hard data for the energy costs of producing rare-earth metals, but they are significant. Until we get a better handle on the cost of ramping rare-earth production twelve-fold, it is premature to conclude that renewable energy sources are better for the environment than natural gas.

This entry was posted in Energy, Environment and tagged James A. Bacon, Solar energy, Wind power. Bookmark the permalink.