What Is a “Low Dead Space” Syringe and Why Is It So Important? 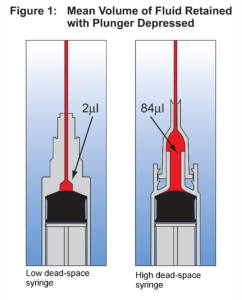 Governor Ralph Northam has shifted Virginia into phase “1B,” meaning that a “front line” worker, or anyone over 65 or with a chronic health condition, is eligible for COVID-19 vaccination. That’s clearly a population several times the estimated 440,500 that are in the state’s  “1A” group  – only about half of whom have gotten a first dose. Expanding eligibility was needed because bureaucratic and resource constraints were clearly delaying getting shots out of the freezers and into people’s arms.

The next issue will quickly become managing events and appointments to avoid the type of long-line chaos in Florida. We also need to make sure we don’t waste the doses we have.

A surprising discovery that physicians made when they received the distribution of Pfizer vaccine is that the 5-dose vials actually contain enough for six doses, or in some cases enough for seven.* The key to getting this extra dose or two is to use syringes that don’t waste any of the vaccine. Waste normally occurs in a small dead space in the top of the syringe just below the needle. The low dead-space design often has the needle manufactured as an integral part of the syringe or with a greatly reduced cavity under the snap-on needle assembly. Even within low dead space versions, there are specific products that waste less and, thus more reliably offer the extra dose.

Originally, “Operation Warp Speed” organized by the federal government, supplied syringe kits that were mostly of the low dead-space design. But recently Health and Human Services has begun supplying a mix of products, and the sixth dose is often unattainable/wasted. (See this article in Politico.)

If the right type of syringe immediately provides for a 20%-40% increase in available vaccine, this is not something to casually overlook. As you might expect, supply of these syringes is now hard to come by. But while scaling up vaccine production quickly is a huge task, prioritizing syringe production seems imminently plausible. (I have been involved with the design and construction of a half-second cycle high-speed production line for medical products so, I know nothing is trivial.)

If you respect the market, the rational approach here is to comprehend the marginal value of the better syringes in this new context (previously priced <$1) and to fund their manufacturing capacity accordingly. If the injection molding equipment has to be imported, put it on a jet rather than  in a shipping container. As they did in WWII, have a police escort meet it at the airport. With sufficient financial motivation and will to expedite inspections and testing, it’s stunning how fast things can happen. Conversely, when it is business-as-usual, it is stunning how long it takes things to happen with medical products. I’ve seen both.

Add a new thing to the list of COVID-related tasks the Northam administration and Virginia Health Department need to get on top of: finding more low dead-space syringes.

Verhaal Kenner is the pseudonym of a Richmond-area resident whose career includes several years in consumer and implantable medical device development.

Not surprisingly, when the extra dose was discovered, most physicians still complied with the 5-dose protocol; it’s estimated that over 100,000 useable doses were tossed out before Pfizer issued new guidance. Originally, when asked, Pfizer staff had said not to use it as “it was not in keeping with the company’s instructions.

This entry was posted in Public safety & health and tagged COVID-19, Guest contributors. Bookmark the permalink.