What China Tells Us About U.S. Educational Achievement Gaps 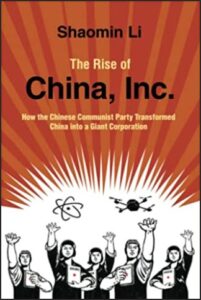 Shaomin Li, a business school professor at Old Dominion University, specializes in studying China’s economy. His book, just published by the Cambridge University Press, “The Rise of China, Inc.,” is well worth reading for its description of how the Chinese political/economic system works. Li, whose job early in life was painting portraits of Chairman Mao, is an advocate of human rights and a determined foe of the Communist regime, but also a steely-eyed realist.

Among China’s greatest assets, Li argues, are traditional values that the Communist regime has been unable to extinguish. An under-appreciated factor contributing to its rise to economic superpower status has been the country’s spectacular gain in labor productivity, which he attributes in large measure to the high value the Chinese place upon educational achievement. In his international business classes, he tells students what they’re up against in a globally competitive economy by comparing two schools — Maury High School in Norfolk and Maotanchang Middle School in Anhui Province.

Li describes Norfolk as an “old, mid-sized city (population 244,000) in Southern Virginia with a lower income level and higher concentration of minorities than its neighbors.” Maury is the best high school in Norfolk and one of the best in the United States, ranking 3,139 out of 24,000 nationally, he writes. The school has good infrastructure, including an indoor swimming pool, a fine library, and an up-to-date computer lab. The teachers, he says, are dedicated. Many have advanced degrees from esteemed universities such as Duke and the University of Virginia. But the school’s academic performance is nothing to brag about.

It is the desire to learn, the motivation to succeed academically that is missing among most students, many of whom are from broken families with one or both parents absent, or with parents who simply do not care about education. For example, it is not uncommon for Maury students to hang out late at night. In 2009, its football team captain was gunned down on the street around 1 a.m. after returning from a party.

The small number of students from families that do value education excel at Maury. Many teachers are thrilled by their achievements…. Every year Maury will send a few students to some of the best universities: Harvard, Princeton, Yale, or MIT.

What sets the failing and succeeding students apart, Li says, is not differing intellectual ability, much less the quality of infrastructure or teaching. The difference is “the culture of the students and their families that propels students to either value their education or forgo it.”

Li contrasts Maury with Maotanchang Middle School in Maotanchang, a small town (population 22,000) in a less developed area of China. Maotanchang is renowned for its production of students with high scores in the Gaokao exams (roughly comparable to the U.S. SATs). A high Gaokao score is necessary to gain admittance to a prestigious university, which provides a pathway to a prestigious professional career.

The Maotanchang cram school gives kids from lower-class families a shot at entering China’s elite, and it attracts tens of thousands of students from across the country.

At the Maotanchang cram school, everything revolves around one and only one goal: Helping the student score high on the Gaokao. Students spend 17 hours every day studying, from 6:00 a.m. to 10:50 p.m. They crowd in about 40 classrooms with about 150 students in each. Many of them are accompanied by their parents or grandparents, who pay high rents to stay in small, partitioned rooms nearby and cook meals for them. To avoid the wait and lunch crowd, parents or grandparents bring lunch to students, who often eat quickly on the street and then go back to studying …. Students do not walk, they run. They run to eat, run to buy daily necessities, and run to the bathroom.

Crowded classes. High teacher-student ratios. Parents and grandparents living in partitioned rooms to cook their children meals. No swimming pools. Li is not recommending Maotanchang as a model for the United States. But the Maotanchang students are learning much more than math and science, he contends. They are learning sacrifice and self-discipline.

Writes Li: “My question to my students is: Assuming that globalization will enable people from different countries to compete for jobs, are you ready to compete with the students from Maotanchang, or from China in general, who are more rigorously trained, but more important, are disciplined and have a hardworking culture?”

In his book Li does not explore the impact of cultural differences on academic achievement between racial/ethnic groups in the U.S. His focus is on comparing the cultural differences between nations. Compared to other countries with a similar income and level of institutional development, China outperforms its peers in productivity gains by as much as five times, he says. What sets Maotanchang apart from Maury, he says, is “the presence or absence of a culture that values education and hard work.” China’s secret weapon in achieving world-beating economic growth has not been its economic policies or its institutions, but its culture.

Li advances several propositions regarding the nature of culture and labor productivity.

First, a person’s desire to work hard is shaped by a desire to improve their economic welfare …. People who hold a hardworking attitude tend to believe they will do better than the average population, and they are thus more tolerant toward the inequality that results from competition. They tend to dislike high taxes, and they tend to plan for the long term because they believe they can receive greater economic reward by sacrificing immediate consumption.

Second, politically, people who hold a hardworking attitude tend to be more conservative (or traditional) in the sense that they are more willing to follow authority and forgo freedom. More specifically, they tend to … rely on government as opposed to valuing autonomy, and demonstrate more conformity and less tolerance of different attitudes.

Third, socially, people’s attitudes toward work are passed on from generation to generation, and family is one of the most important channels through which this culture is learned…. People growing up in broken families tend to perform more poorly in work and study…. Culture cascades down from generation to generation…. Two-parent households make the cultural transmission stronger, while broken households weaken the transmission.

The Confucian culture of hard work, frugality, and respect for the family, Li says, “is conducive to economic productivity.”

Bacon’s bottom line. To repeat, those generalizations are based on comparisons between countries. But it’s safe to say that a willingness to defer gratification, exert self-discipline, and study hard vary by sub-cultures, as seen most clearly by the values and priorities of Asians from the Chinese civilizational sphere now residing in the United States. The controversy over racial “equity” at Fairfax County’s Thomas Jefferson High School for Science and Technology is essentially a debate about efforts to level the playing field between “Asians” (including South Asians, who tend to share the same attributes) and everyone else.

In the “progressive” doctrine emerging from Critical Race Theory, traditional family structures, a willingness to defer gratification and a belief in hard work as the key to success are deemed to be attributes of “Whiteness,” hence something to be deplored. In truth, the traits supporting academic achievement are not intrinsic to any race. Indeed, in the 21st-century context, they are more typically “Asian” than “White.” But insofar as the “progressive” mantra succeeds in stigmatizing “Whiteness” among Blacks, Hispanics, other non-Asian minorities, it does a pernicious disservice.

Students are taught they are entitled to the results of hard work… without actually putting in the hard work. The inevitable result will be to widen academic achievement gaps, not to narrow them.

This entry was posted in Culture wars, Discipline and disorder, Education (K-12), Uncategorized and tagged James A. Bacon. Bookmark the permalink.