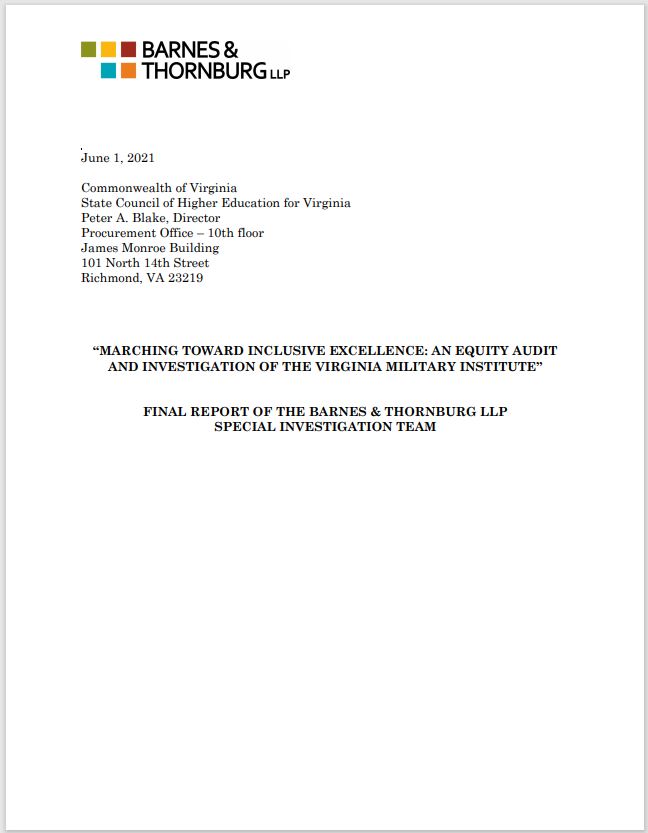 Barnes & Thornburg (B&T), the law firm hand-picked by the Northam administration as an “independent” investigator, has delivered its final report on racism and sexism at the Virginia Military Institute. The report concluded that racial and gender disparities persist in how cadets are treated at the military academy.

VMI’s “culture” reinforces barriers to addressing those disparities, the report says, and as a state-funded institution, VMI must be held accountable to taxpayers and the General Assembly and prove that it is “implementing its diversity, equity, and inclusions (DE&I) proposals.”

Painting a picture based largely on an anonymous survey of cadets, faculty, staff and alumni, supplemented by in-person interviews, Barnes & Thornburg said that racial slurs and jokes are “not uncommon” on post, and that roughly half of the African-Americans cadets feel there is a “culture of racial intolerance” at VMI. Only a small percentage of Whites agreed, but B&T said White responses only point out that “where African Americans experienced racism … Caucasian cadets do not or choose not to see it.”

The VMI investigation highlighted statistical disparities in attitudes, enrollment, and  Honor Code convictions, but the report offers almost no concrete instances of racism. It publishes numerous quotes alleging racism but makes no effort to to investigate those allegations. On the other hand, the report made several major concessions that undercut Governor Ralph Northam’s statement last year in ordering the investigation, based on Washington Post reporting, that racism at VMI was “systemic” and “appalling.”

Among the findings buried in the body of the report and ignored in the summary:

While highlighting statistical disparities at VMI, Barnes & Thornburg made only a superficial effort to compare them to disparities at other Virginia colleges and universities. In other words, it failed to demonstrate that the issues relating to race and sex were any more prevalent at VMI than any other public or private university.

Responding in a prepared statement to the Final Report, Superintendent Cedric T. Wins did not comment upon specific findings of the report. Rather, he reiterated his commitment to the five outcomes of honor, diversity & inclusion, the VMI brand, competing and winning, and One VMI. “The Institute will move forward and will be better because of this chapter in our history,” he said.

The Final Report consists of two parts: the executive summary and the body. The body is comprehensive, provides numerous perspectives on the issues raised, and explores nuances and complexities. The executive summary, by contrast, imposes a pre-determined narrative on the report and cherry picks information from the body to back its assertions. States the summary:

VMI has … traditionally been run by white men, for white men. VMI’s overall unwillingness to change — or even question its practices and traditions in a meaningful way — has sustained systems that disadvantage minority and female cadets and faculty, and has left VMI trailing behind its peer institutions. If VMI refuses to think critically about its past and present, and to confront how racial and ethnic minorities and women experience VMI, it will remain a school for white men.

The report bases its conclusions largely on an opinion survey supplemented by individual interviews.

The authors of the summary, in effect, give enormous weight to the roughly half of African Americans who believe there is racism at VMI, give zero weight to the other half who evidently have not experienced racism, and give zero weight to the views of the overwhelming majority of white cadets (90% to 95%) who say they see no evidence of racism. The summary says nothing about the views of Hispanics, Asians or others. If VMI were “run by white men for white men,” presumably other ethnicities would perceive some prejudice as well. But there is no sign of it. The experience of other ethnicities does not figure in this report.

The report is too voluminous and raises too many issues to do justice in this overview. It contains lengthy discussions of sexual harassment and discrimination, the Honor Code, the widespread resentment against student athletes (many of them African American), and statistical comparisons with other Virginia universities.

I will address those in future posts. In the meantime, I think a couple of things can be fairly said about the report. The investigators did a reasonably fair job of reporting what they found in the main body. But Governor Northam got what he paid $1 million for in the disgracefully one-sided executive summary.