Virginians Are Loading the COVIDWISE App. Does It Make a Difference? 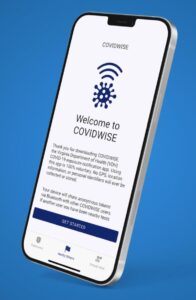 Virginia leads the nation in the percentage of citizens who have downloaded the COVIDWISE smart phone app that alerts users when they might have been exposed to the virus, reports Virginia Business.

The state has spent $1.5 million promoting sign-ups. Jeff Stover, executive adviser to the health commissioner, says that downloads have been averaging 2,000 to 5,000 per day. Nearly 900,000 people, 10% of the population, how have the app.

Stover cites a model by Google, Stanford University and Oxford University that predicts if a locality has a 15% app adoption rate, infections can be reduced by about 8% and deaths by 6%.

Could COVIDWISE partially explain the lower rate of spread in Virginia, even as the virus induces panic in other states? According to Statista, Virginia had the 8th lowest rate — 3,303 confirmed cases per 100,000 population — among the 52 states, Washington, D.C., and Puerto Rico.

I’ve downloaded the app, but I’ve never received a notification. Perhaps that’s because my wife and other members of our family have been pretty diligent about socially distancing ourselves. Our social life has gone all to hell, and we’re getting cabin fever… but we’re thinking we might survive COVID-free until we qualify for the vaccine.

Speaking of which, I checked out the New York Times calculator that tells me where I stand in line for the vaccine. I’m behind 118.5 million other people. My wife, who is seven years younger, is behind more than 200 million other people. Looks like I’ll be going on vacation months before she does!

But back to the app… It uses Bluetooth signal strength on your smart phone to know how close and how long you are to someone else with the cell phone app. If someone tests positive for COVID, the health department gives you a PIN, which you enter into the app. The app identifies everyone who was exposed to you within six feet for 15 minutes or longer within 24 hours within the past 14 days.

I suppose that is useful information. You can self-isolate until a COVID test proves positive or negative, reducing the risk for those around you.

What we don’t know is how well the app works. The Virginia Business article provides no data on the number of potential exposures identified so far. If we knew that it had spotted, say, 10,000 close encounters (to pick a number), we’d have the sense that it was making a difference. However, the fact that Stover provided no number to Virginia Business suggests to me that the number is underwhelming.

This entry was posted in Public safety & health, Science & Technology and tagged COVID-19, James A. Bacon. Bookmark the permalink.