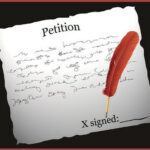 Currently, online petitions are advocating the removal of the superintendent of the Fairfax County Public Schools and the principal of Thomas Jefferson High School. (See the petitions here and here.)

Such online petitions are legally futile.

However, the online petitions found at Change.org are unlikely to apply much political pressure on an appointing authority. They merely list the number of people who signaled their support, providing little information about who they are, much less whether they reside in the locality in question.

Elected officials.  Members of the Fairfax County School Board are elected officials. They can be removed either (a) by the voters at the next election, or (b) by satisfaction of the removal procedures set forth under Virginia Code, Title 24.2, Article 7.

To start the removal process, a removal petition “must be signed by a number of registered voters who reside within the jurisdiction of the officer equal to ten percent of the total number of votes cast at the last election for the office that the officer holds.” (Virginia Code, Section 24.2-233.)

Furthermore, the removal petition must set forth statutory reasons for the requested removal, which are limited to the following:

Even if an online removal petition lists reasons for removal that track the statutory language, the signature requirement will not be satisfied. Because a petition to remove a member of the Fairfax County School Board must be signed by people registered to vote in Fairfax County, any “votes” by unidentified people in support of an online petition — no matter how numerous — are legally useless. Online petitions offer no proof that the people supporting the petition are registered voters in the jurisdiction in question. Even if someone attached a copy of such an online petition to a removal petition filed in a Virginia court, it likely would not be counted toward the 10-percent threshold of registered voters.

Online petitions may be useful to allow people to express their opinions and beliefs about public officials and their actions. But they are legally insufficient under Virginia law to make any practical contribution to the removal of appointed or elected officials.  Anyone interested in removing a public official from office in Virginia should not place their hopes on any online petition.

This entry was posted in Courts and law, Governance, Uncategorized and tagged Emilio Jaksetic. Bookmark the permalink.