UVa Memorial Illuminates a Neglected Part of Virginia’s Past 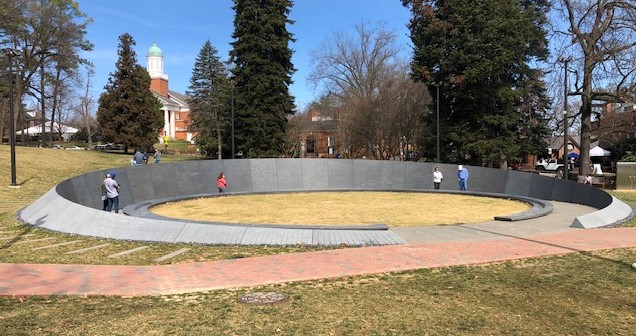 The memorial to the slaves who labored at the University of Virginia is a quiet, dignified and moving tribute to the Virginians whose contributions to the university went unappreciated and unrecognized for too long. Yesterday my wife and I visited the memorial, which was dedicated almost a year ago, for the first time. It is a wonderful example of the “additive” approach to remembering our past — adding new layers of understanding — as opposed to the purgative approach of blotting out the remembrance of those who made significant contributions to society but whose association with slavery, the Confederacy or segregation offend modern-day sensibilities.

The outer ring of the memorial takes the abstracted style of genealogical trees with the names of slaves (or occupations if the names are not known) filled in. The inner ring contains factoids and vignettes from the fragmentary historical record to breathe life into those names. Here are some excerpts (with editorial interpolations from yours truly):

1822 — Willis runs away. The UVA overseer pursues and captures him in Louisa County.

(Bacon: Slaves yearned for freedom, and many of them made a break for it when they got a chance. Poor Willis. Too bad he didn’t make a clean getaway…. UVa had an overseer? At least there is one administrative position that has been eliminated over the ages.)

1822-23 — Henry works as a blacksmith, Charles works as a stonemason, Christo works in a brickyard, Sally cooks meals, and Davey works as a carpenter.

1824 — Carpenter Sam, an enslaved man, supervises the work of other carpenters: Davey, William, and “young Sam,” the last possibly his son.

1825-65 — An average of over one hundred enslaved people work annually as blacksmiths, bricklayers, cooks, carpenters, painters,  seamstresses, janitors, and domestics.

(Bacon: Some 500,000 African Americans lived in Virginia; some were free blacks, but the vast majority were slaves. Those who labored for UVa were not necessarily representative of the whole. But it is remarkable how many had learned artisanal skills such as carpentry, stonemasonry, apparel-making and ironworking. It would be interesting to know what percentage of the white population had the same skills. How extensively did African Americans learn skills under slavery, how did that knowledge position ex-slaves after emancipation to compete against whites for income, and what did working class whites, either through legislation or labor unions do to block that competition?)

1820 — Disturbed in the night “by a noise made by negroes passing thro the university,” a professor proposes that the school institute a regular slave patrol.

(Bacon: The aforesaid negroes were slaves by day, but they enjoyed considerable freedom of movement at night. What did they do at night? When did they sleep?)

1832 — Three professors purchase Lewis Commodore at public auction for the school’s use. They are later reimbursed, and he becomes UVA property.

(Bacon: Though a slave, Lewis Commodore earned great respect among the professors and administration at UVa. That respect did not immunize him to the abuses of students.)

1850 — Three students attack a twelve-year-old enslaved girl in a field near UVA. The students are expelled.

(Bacon: Students could not count on abusing slaves with impunity. One suspects that the “attack” in a field was a euphemism for rape. Slaves did not enjoy the legal protections of free people but the abuse of slaves did not go unnoticed. The students were expelled. If a slave had raped a white woman, he likely would have been hung. But it appears that the system acknowledged the humanity of slaves at some level and exacted some punishment, albeit in highly unequal fashion, for sins committed against them.)

(Bacon: Who are these hotelkeepers, and what work did their slaves perform? From the Library of Virginia and other sources we know that Virginia had a diverse economy. Many slaves worked in urban occupations, in manufacturing, and in canals. Slaves engaged in artisanal and industrial occupations enjoyed a wide range of mobility and freedom that plantation slaves did not.)

(Bacon: It appears by this time that African Americans had developed their own mode of worship. Many historians depict religion as a tool of social control over slaves, so it is surprising that Charlottesville’s slaves were granted independence of worship. Was this an acknowledgment by Southern white society that slaves were entitled to freedom of conscience?)

1866 — Isabella Gibbons, formerly enslaved at UVA, teaches at a freedman’s school in Charlottesville with 42 students. One month later the school has grown to 63 students. It will become the Jefferson School.

(Bacon: These freed slaves had agency. They didn’t wait for white people to educate them — they educated themselves. One wonders if they thought themselves victims because they were not taught in the same schools as whites.)

“Can we forget the crack of the whip, cowhide, whipping post, the auction-block, the hand-cuffs, the spaniels, the iron collar, the negro-trader tearing the young child from its mother’s breast as a whelp from the lioness? Have we forgotten that by these horrible cruelties, hundreds of our race have been killed? No, we have not, nor ever will.” — Isabella Gibbons, 1867

Slavery was a cruel and evil institution. But it was not practiced uniformly. Local practices varied, and they evolved through the years. The University of Virginia memorial is not only a tribute to long-forgotten slaves but it provides a glimpse into a form of non-agricultural slavery — what slavery might have become had the Civil War not ended the institution for good.