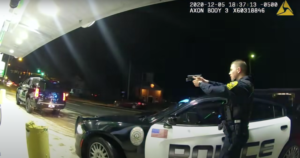 Looks like Windsor, Virginia, is finally on the map.

For all the wrong reasons.

The tiny incorporated town in Isle of Wight County, just west of Suffolk, is home to about 2,758 people.

It’s not a place that makes much news and the folks there probably like it that way.

But a traffic-stop-gone-bad catapulted the town into the national spotlight this weekend. From the Drudge Report to The New York Times, the media zeroed in on the behavior of two gun-pointing small-town police officers caught on body cam footage yelling at an African-American Army officer who was being detained over a missing license plate.

At the request of the Windsor Police Department, Gov. Ralph Northam called for a state police investigation into the incident.

Look, we don’t have all the facts. But the video is lengthy and disturbing. One of the officers, the one who pepper sprayed Lt. Caron Nazario in the face, has reportedly been sacked.

Here’s what we do know: On the night of December 5, 2020, Nazario was driving a new black SUV with a temporary tag in the rear window.

A police officer attempted to stop him for the missing license plate. Instead of pulling over on the dark road, Nazario reportedly slowed down, put on his turn signal and drove for almost a mile until he was able to stop at a well-lit BP gas station.

Meanwhile, the officer called for backup, saying the driver was attempting to elude the police.

Driving to an illuminated spot is what any cautious citizen does when flashing lights appear in the rear view. Especially if they are traveling at night on a narrow road.

Watch the body cam footage to see for yourself:

I almost always support the police. My philosophy is that they have dangerous jobs and aren’t paid enough to do them. They see things the rest of us never want to see, so we can sleep peacefully in our beds at night. Worse, they are asked to make split-second-adrenalin-fueled decisions that we leisurely second-guess over lattes in Starbucks.

Fact is, in this case the driver who was wearing his Army uniform was polite but filled with apparent trepidation. He didn’t get out of his car when ordered. He told the officers who were pointing their loaded weapons at him that he was afraid to get out. One responded, “You should be.”

“I’m actively serving this country and this is how you treat me?” Nazario asks at one point.

After pepper spraying him at close range and roughing him up, the officers allowed Nazario go without a ticket. 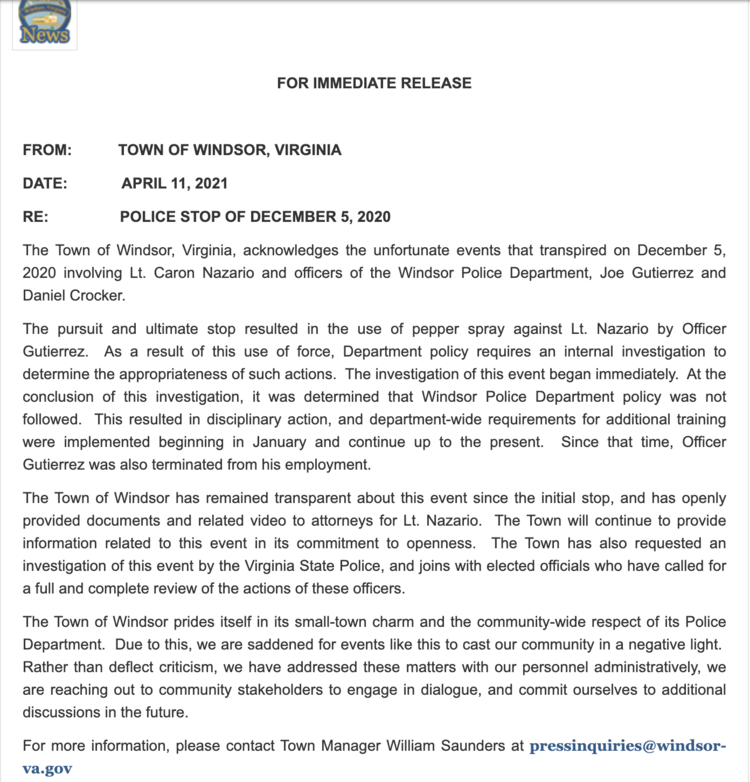 At a press conference yesterday, Isle of Wight NAACP president Valerie Butler asked Gov. Ralph Northam to summon the General Assembly back to Richmond for a special session to abolish qualified immunity for police officers.

Several bills to end qualified immunity died in the General Assembly this past February.

In case you were wondering, the Cornell Law School Legal Information Institute defines the purpose of qualified immunity this way:

“Qualified immunity balances two important interests—the need to hold public officials accountable when they exercise power irresponsibly and the need to shield officials from harassment, distraction, and liability when they perform their duties reasonably.”

I hesitate to point this out, but the only reason we know about the December traffic stop is because Lt. Caron Nazario recently filed a civil rights lawsuit in federal court against the two police officers.

Why not wait to see the outcome of that case before tossing out legal protections for all of Virginia’s police officers?

This entry was posted in Civil Rights, Crime , corrections and law enforcement, Race and race relations and tagged Kerry Dougherty. Bookmark the permalink.