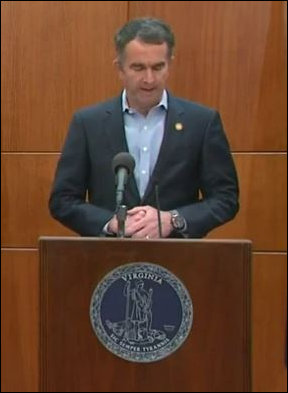 Communication in this time of crisis has not been a notable strength of either Governor Ralph Northam or his cabinet. I discovered the reason why in the Governor’s press conference today: They are clueless.

The state’s official website as of today has no information about the real time activities of emergency management, about testing availability, about personal protective equipment, or about anything else that matters.

No word either about the actions of Virginia’s Emergency Operations Center (VEOC), just that the center is conducting response operations. The situation report tells us nothing about what state officials are doing, how they are doing it or what success they may or may not be having.

Now for today’s Governor’s press conference. I must report that I am literally stunned.

The Commonwealth has had in place for eight years a plan[1]  in which is written the following planning assumptions among others (italics are mine):

There was no one on that stage today, including the Governor, the Secretary of Health and Human Resources, the Health Commissioner, and a woman who I assume to be the Director of the Division of Consolidated Laboratory Services, who demonstrated any knowledge either of those planning assumptions or current events.

Modeling. There was a discussion by the Health Commissioner about modeling. He is still waiting for more data to project infection rates and resulting healthcare requirements in Virginia. He seemed totally unaware of the 2012 planning assumption that infection rates will exceed 25%. He did not mention that the state’s modeling and simulation center in Suffolk has been operational since 1996.

Protective gear. There were unhelpful discussions about Personal Protection Equipment (PPE). When asked how much PPE might be required, Secretary Carey replied, “As much as we can get.” Pretty definitive. Did the state do any modeling between 2012 and now on how much PPE would be required if its published assumption of a 25% infection rate were met? Did it take measures before now to acquire the PPE that would be required? Same question about hospital and ICU capacity. The answer clearly is no.

Testing. Then there was the testing discussion. The Director of the Division of Consolidated Laboratory Services (assuming that was the person on the stage) was proud to announce that the state laboratory system had achieved sufficient automation of testing to assess 200 samples a day. She described a backlog of 2,000 samples.  No one mentioned or seemed to have any knowledge of commercial lab capacity. On February 29, the FDA cleared the regulatory barriers preventing commercial labs from performing COVID-19 testing. Since then, American Clinical Laboratory Association (ACLA) member laboratories have steadily increased COVID-19 testing capacity each week. As of March 29, ACLA members had performed approximately 650,000 COVID-19 tests nationally, including 84,000 tests completed on March 28 alone. In a press conference 33 days after the federal clearance, no one on the stage at the Governor’s press conference seemed aware that commercial labs were testing, much less how many have been conducted and can be conducted in Virginia, or whether the data from those tests are informing the Virginia model from which the Health Commissioner is awaiting results.

Hospital capacity. The Secretary of Veterans and Defense Affairs answered questions about military hospital capacity in Virginia. He specifically mentioned a phone call with the Commander of Naval Hospital Portsmouth and said they were preparing to serve their military clients. The Secretary did not mention that USNS Comfort is in New York Harbor with 1,200 medical personnel from that Naval Hospital.

The homeless. The Governor was asked about provisions for the homeless. He looked stunned by the question. He looked around in panic and called Dr, Carey to the mike  His answer – working on that.

There was not a single mention of (or question about) the functioning of the State Emergency Operations Center or the six HCCs in this crisis.

I could not make that up. I have been the one on here regularly asking readers to cut the Governor slack on several fronts. I take it all back  It is too late to impeach him, and it wouldn’t be fair. Whoever replaced him would be stuck with his cabinet.