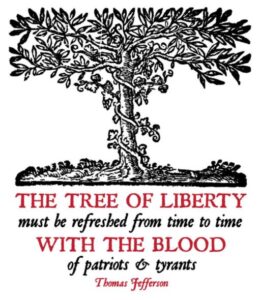 As the old saying goes, “You can’t fight city hall.” Certainly not in Fredericksburg.

Several months ago, I chronicled the travails of my mother, Sallie Daiger, regarding the removal of a tree in the public right-of-way in front of her house. I won’t repeat the gory details — you can find them here. The bare essentials of the story are these: at my mother’s bidding back in April, I began chopping down a nuisance crape myrtle in front of her house. A neighborhood tree warden saw what I was doing and told me to stop. The city, he said, forbids homeowners from maintaining trees in the utility right-of-way. So I did as I was told, although the deed by then was mostly done. A few days later Diane Beyer, the director of Public Works, appeared unexpectedly at my mother’s front door to deliver a bill for $1,117.86. Accompanied by a uniformed and armed police officer, she said the action was being taken “in lieu of civil or criminal prosecution.” Refusing to be intimidated, my mother, after some research, determined that the bill was wildly inflated, bearing no relationship to costs incurred by the city. Beyer modified the charge, reducing the bill to $597.86. Objecting that that bill was still excessive, my mother refused to pay. We heard no more from Ms. Beyer.

Fast forward from April to November. My mother received her real estate property tax bill in the mail. Over and above the usual charge for real estate taxes, the bill contained an added line item: “Delinquent taxes — $597.86.”

Delinquent taxes? My mother owed no delinquent taxes. Indeed, though the city gives taxpayers the option to break the payments in two over the year, she routinely pays the full amount up front. The number — $597.86 — was unmistakably a reference to the unpaid fine.

Still determined not to pay the excessive charge, my mother cut a check for the amount she owed in real estate taxes only, and my sister Didi hand-delivered the check to the city office. Didi explained to the clerk that the check covered only the real estate tax. The clerk disappeared for several minutes to confer with a superior, then came back and said the city could not take the check. My mother had to pay the entire amount or nothing at all.

That put my mother in a quandary. The tax bill included the following information: if payment was one day late, she would incur a $197.08 penalty. If she was a half month late, she’d start racking up “interest” charges of $18.07 per month. That would amount to 3% per month (compounded monthly, roughly equivalent to 40% annually on the portion of the bill she was refusing to pay.

At 92 years old, my mother is a very determined woman. Some might say stubborn. But her health is failing, she feels beset by problems, and she doesn’t have as much fight in her as she once did. Although she was outraged by the way the city had treated her — grotesquely overbilling her, dispatching an armed police officer to assist in the bill collection, reducing the sum but still overcharging for the putative services rendered, offering no avenue of appeal, and now piggybacking the inflated charge onto a real estate bill that threatened punitive fines and interest rates — she gave up. The prospect of massive, disproportionate penalties and interest charges was just too much. She wrote a check for the full amount.

City Hall won. It crushed a long-time tax-paying and law-abiding citizen into submission.

I did not get lassoed into this latest chapter in the drama until after my mother had already paid the bill. Once I heard the story, I wanted to know how the city could possibly justify its actions. After bouncing around a bit on the telephone, I wound up talking to Fredericksburg Treasurer Brenda Wood. I will say up front that Ms. Wood could not have been more polite or more patient in answering my questions.

Citizens who object to the assessed value the city places on their property have an avenue of appeal. The city’s Board of Equalization will formally review the assessment. There’s no guarantee that a property owner will be satisfied with the result, but at least he has the right to present his case to a disinterested third party. My mother had no right of appeal. Neither the City Manager nor our city councilman answered our plea for a review. From start to finish, the process she endured was arbitrary and designed to intimidate her into compliance.

From a legal perspective, when my mother refused to pay the Department of Public Works charge, the city treated it as a lien. There are different kinds of liens, Wood explained. Some are recorded in the clerk’s office as a claim or liability on the property, collectable when the property is sold. But this was a different kind of lien that doesn’t have to be filed formally. This type can be collected through the same bureaucratic machinery that collects real estate taxes — except there’s no Board of Equalization to which an appeal can be made. The process, she added, is defined in the Code of Virginia.

Wood was sympathetic and asked if we had contacted our city councilman. We had, I replied, but he had never called back. She said she would see what she could do. A few days later, my mother received a call from Matt Kelly, an at-large councilman. He told my mother he’d read the article I’d written several months ago and felt moved to respond. He did not mention being contacted by Wood, so we’re not sure if the timing of his reaching out was a coincidence or not. Regardless, he expressed sympathy. He said the city had not done an adequate job of publicizing the ordinances put into effect several years ago regarding trees in the right-of-way. Kelly, who is an insurance adjuster by occupation, went so far as to offer to pay the fine himself.

While grateful for the offer, my mother refused. There was a bigger principle at stake: the city should treat law-abiding taxpayers as citizens with rights, not subjects to be bullied. If she suffered this kind of abuse, she said, it’s likely that many other citizens have as well. The abuse needs to end. Kelly told her that he would look into it. And that’s where the story stands. For now, though, the tree tyrants have won.

This entry was posted in Individual liberties, Regulation, Uncategorized and tagged James A. Bacon. Bookmark the permalink.