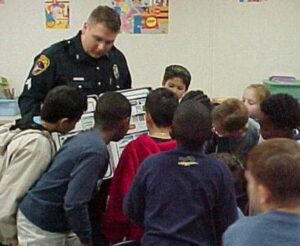 Remember when SRO was standing room only? It’s not now. That’s not truly a loss, nor is it unexpected in a language whose alphabet only offers 17,576 three-letter combinations for abbreviations.

The number goes up to almost half a million, specifically 456,976, if you go to four letters, and still there are overlaps. I found that out once when I sent a four-letter acronym to a woman a third my age suggesting sarcastically that an upcoming dull and lifeless chore we had to do would be the “highlight of my day.” She didn’t get the reference, and Google took her to the Urban Dictionary where she learned, to my chagrin if not hers, that the abbreviation I’d used also described a female-superior sexual position.

Hilarity ensued once we compared notes, but it was dicey in the interim.

SRO now stands for School Resource Officer, of course, because we don’t want to call them campus cops. I don’t know why, but we just don’t. A debate has gone on locally – that’s Harrisonburg, for my readers in Idaho – about whether SROs are necessary in the middle and high schools.
One fact that’s come up in the dueling statistics is that more than 70% of faculty and staff and more than 80% of students, in both local and statewide surveys, feel safer with police officers assigned to their schools. This can obviously be a jumping-off point for discussion of whether they actually are safer, or what the other 20-some percent feel. But the fact in isolation can be a launch pad for a different kind of discussion.

Teachers work longer hours but have more time off in the summer. So, math available on request, a teacher has to put in 46 hours a week during the time he or she does work in order to match a year-round employee working 40 hours a week. And I know some of them would see that as a luxury.

There are also stresses that come with the job. Who knew? Classroom management, professional development, budgeting time for food and bathroom breaks.

It’s even harder for teachers if they like their students, especially when one of those students is going through an emotional problem, be it at home or at school. The teacher can of course handle that by telling the student, “Tough luck, kid, I’ve got papers to grade.” Maybe some do. Teachers also have the right, if not the ability, to be dismissive or punitive toward the student with inadequate winter clothing or who can’t afford a notebook or pen.

Teachers obviously bring these things on themselves by entering a profession that is demanding and underfunded, and where the emotional uplift of opening a young mind has to be balanced against the spiritual drain of an SOL test.  Teachers of course defeat the purpose of the SOLs when they prep and tutor students to get them through that standardized grinder. The teachers know going in that those tests are designed to identify and discard unlucky or impoverished students and blame the failure on the teacher. Yet they go into the profession anyway.

Suppose we wanted to make teachers’ lives easier by sparing them from some of the stresses brought on by their ill-advised choice to try to educate children. We could start by making them feel physically safer. Not just against the horrid but rare possibility of a school shooter but against the occasional demanding angry parent, or two linebackers trading punches in the hallway.

Once we start with that feeling of security, we can ask what else we can do to Let Teachers Teach. Granted, some of these things would cost more, but that’s one reason I can’t be trusted to run the world. I’d jack up taxes so much that every teacher would have time for every student and every local businessman would whine like a teething infant. And in that fantasy world education expenses would be based on factors like optimal class sizes and teacher workloads. School counselors in the Let Teachers Teach program would be hired based on how many students in a school might need them, and not on a city manager’s desire to cut 2.78% from next year’s take. Teachers would wind up being as valued as the CEO of a payday loan company.

The Let Teachers Teach movement might also include free school supplies, although we’d have to consider how much loose leaf paper we can give away without raising BPOL taxes. And once we’ve established goals that teachers don’t have to break up fights, counsel disturbed students, buy their own chalk, or teach overcrowded classes, we have to make it a reality.

And those on the left will want to rename it Defund the Teachers.

This column has been republished with permission from Joe Fitzgerald’s “Still Not Sleeping newsletter on Substack.

This entry was posted in Crime , corrections and law enforcement, Education (K-12) and tagged Joe Fitzgerald. Bookmark the permalink.