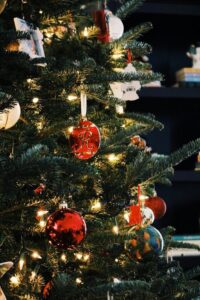 Far be it from me to say anything bad about Santa Claus, especially on Christmas Eve. But there was a Christmas, ages ago, when I was a tad disappointed in the old boy. In fact, I thought Mr. Claus — Father Christmas, Ole St. Nick — was getting lazy.

You see, back when Eisenhower was president, when TV shows were in black and white and movies weren’t rated because they didn’t need to be, Santa not only brought toys. He brought the family Christmas tree.

At least to our house. Maybe we were special, although at the time I assumed he did the same for every family in the world.

That’s right, Santa dragged a 7-foot fir down the chimney along with the toys. Then he set it up, tossed on the lights, hung every ball and draped every icicle. And he still found time to eat a plate of cookies.

What an industrious guy.

I assure you, there is nothing quite like getting up on Christmas morning and casting your little eyes for the first time on your tree all aglow. Somewhere in my attic today are reels of 8mm film of my brother and me staring in slack-jawed amazement on Christmas mornings as we got our first glimpse of the tree.

For a few magical moments, the tree was grander than all of the packages under its boughs. It even overshadowed the Dougherty family’s most treasured Christmas accessory: the fake fireplace. A must in a hearthless house. Ours had a black cardboard mantel and an orange tissue paper “fire” with a blinking light behind it. If you squinted hard, it actually looked like a flame flickered there.

Forgive me, I digress.

One year, I can’t remember which, Santa phoned my folks to tell them we’d have to start getting our own tree and decorate it ourselves. Looking back now, that coincided with a time where our toys were increasingly difficult to assemble and our parents looked like zombies every Christmas morning.

It took me about 20 years to connect the two.

In fact, we were stunned by the news that a Christmas tree was now our responsibility.

“Why?” my brother and I chorused.

My father thought for a minute.

“Santa joined the union,” Dad replied. “Dragging around trees and lights and tinsel aren’t in his job description anymore.”

My father had been a proud member of the Seafarer’s International Union. We didn’t know diddly about fireplaces, but we knew all about unions.

“What union is he in?” I asked suspiciously.

“Well, shouldn’t it just be new houses that don’t get their trees put up by Santa anymore?” I asked.

“Nope,” my dad replied. “We’re not grandfathered in. This is it. He’s no longer doing trees. He says it takes too much time. From now on, it’s up to us.”

“It’s not like his job is that hard,” I sniffed. “He works at Christmas then he sits around the rest of the time drinking cocoa.”

Dad indignantly reminded me that Santa ran the world’s biggest toy shop and worked there all year long. On top of that, he had to deal with all those pesky elves.

The tree tasks were killing the old guy.

Then my father dropped the bomb. If we refused to take over tree duties, he warned, there was a chance St. Nick might go on strike. No tree. No toys. No reindeer paws on the rooftop.

From then on, trees were our business. But each time we dragged a Scotch pine across the rug a few days before Christmas, we’d reminisce about those magical times when a fully illuminated tree just appeared in our living room on December 25th.

Those were the good old days. Before Santa got his union card. And went soft on us.