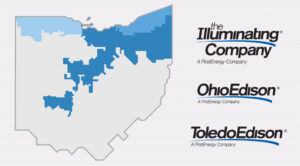 Three of the six electric utilities charging customers to provide others with Ohio PIPP subsidies. Per 1,000 kWh the surcharge to customers is $3.19 for Toledo Edison, $3.34 for Ohio Edison and $2.37 for The Illuminating Company.

Both the Virginia House of Delegates and Senate have voted to increase the price of electricity to most Virginians in order to subsidize the bills of low-income utility customers. How much? They have no idea. But the program in Ohio being copied adds from $1 to $3.66 to the price of 1,000 kilowatt hours for those not subsidized.

The Virginia version is even borrowing the name and acronym from Ohio, the Percentage of Income Payment Program (PIPP). The charge in both is called a “universal service fee.” In 2020, the Ohio program will cost ratepayers $301 million to subsidize the power bills of about 275,000 low-income households. The Public Utility Commission of Ohio (PUCO) sets the amount charged in each utility’s service territory and the Ohio Development Services Area transfers the necessary funds to the various electricity providers.

The largest electricity provider in that state of 11.7 million people, Ohio Power, has the highest “adder” on its rates, $3.66 per 1,000 kilowatt hours used. That works out to $44 per year for a residential customer using exactly that amount monthly. A large industrial or commercial user would pay the same rate until monthly consumption hit 833,000 kilowatt hours, when a reduced rate kicks in on additional consumption. The first 833,000 kilowatt hours of usage in Ohio Power’s territory is hit with a $3,050 monthly surcharge. 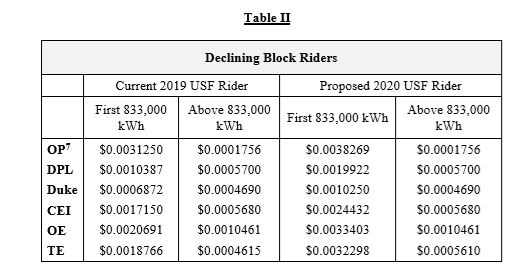 The original 2020 “rider” amounts requested for Ohio PIPP, slightly higher than the amounts finally approved by the Public Utilities Commission of Ohio. Ohio Power, serving 42 percent of state, is charging $3.66 per 1000 kWh.

UPDATE:  One of the people who regularly comments on energy discussions found and posted this history of Ohio’s program, which dates back to 1983.  For more find Acbar’s comment in the string.

Virginia’s Percentage of Income Payment Program is created in the pending Virginia Clean Energy Act, which has passed on both sides of the legislature but with differences to be ironed out next week. The creation of PIPP is not one of the issues for the conference committee to resolve. As noted in an earlier post, there has been no mention of PIPP’s possible cost in the ongoing discussions, so Bacon’s Rebellion contacted the Ohio utilities commission to see what happens there.  PUCO shared the most recent case file.

Virginia’s State Corporation Commission has produced some estimate of cost impact for residential customers of other parts of the clean energy transition proposal, but it left the potential cost of PIPP a question mark. Details still remain to be worked out, but an additional $2-4 per month for residential customers is likely. PIPP would apply in both Dominion’s territory and that for Appalachian Power Company.

PIPP has been offered in Ohio for decades, and Dominion Energy is familiar with it because it runs a natural gas distribution company in that state. APCo’s parent company has a presence in Ohio, too. The Ohio PIPP covers natural gas and electricity, although as with the Virginia proposal the state’s rural electric cooperatives are exempt. It is safe to assume that once Virginia PIPP is established for electric customers, a natural gas program will follow.

In Ohio, if you heat your home with natural gas, that bill is capped at 6% of your household income, with another 6% going to the electric company. If you have electric heat, the cap is 10%. Once enrolled, a monthly budget payment amount is set on that basis and if you stay current, any excess is paid out of PIPP funds. As with the Virginia program description, if you stay current on the monthly bill amount any old bills in arrears are also paid out of the PIPP funds contributed by other ratepayers.

Those subsidies and payments for unpaid past bills will use up most of the $301 million in PIPP revenue for 2020. About $11.5 million of the total will be spend on energy efficiency programs and $5.4 million on administration.

Virginia’s proposal, according to the bill, adds a sweetener: If the participant lowers their usage below the previous baseline, half the value of that reduction will also be taken off that month’s bill.

According to case testimony from the Ohio Development Services Agency, PIPP participation peaked in 2015 at almost 400,000 households but has dropped since with the improved economy. It sought the 50% increase in revenue to $301 million for the electricity program in part because underlying electric rates are up. Electricity prices in Ohio and Virginia are very similar.

Doing the math, the average annual cost per participating Ohio household is $1,100. Who is being subsidized is a nice economics argument, but clearly the utilities also benefit by reducing the amount of unpaid bills and collection cost. Lowering risk at somebody else’s expense is always attractive.

In Ohio, to qualify for PIPP your income must be at or below 150% of the federal poverty level, about $39,000 for a family of four. The Virginia legislation is less specific, proposing PIPP eligibility for those in various other public assistance programs, including Medicaid, housing or food programs. No estimate has been provided how many households served by Dominion or APCo that might be.

Part of the cost in Ohio, obviously, is the annual case at the utilities commission to review the accounting for the previous year and set the rates for the coming year. It reads exactly the same as the annual reviews and true ups for the various rate adjustment clauses that are now part of our electric bills in Virginia. It will be only one of the several new “RACs” being created by this pending legislation.

And if the SCC’s cost predictions are correct, and Virginia’s electricity rates begin to soar because of this sudden infusion of wind and solar generation, battery storage and related spending, then the amount needed by Virginia PIPP to protect low-income customers from that impact will also have to increase.