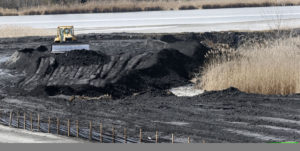 A deal cooked up between Governor Ralph Northam and legislative leaders, with the support of environmental groups and the acquiescence of Dominion Energy, will require Dominion to excavate coal ash ponds at four of its power plants, recycle at least 6.8 million cubic yards, and move the rest to modern landfills. The requirement, according to the Washington Post, will add about $1 billion to the $1.7 billion cost of Dominion’s preferred approach. The cost to ratepayers is not to exceed $225 million a year (the Richmond Times-Dispatch figure) or $5 per month per typical retail customer (Washington Post).

What I find disturbing is the totally false premise upon which the legislation is based: that landfilling of coal ash is necessary because existing coal ash ponds are leaking heavy metals. This assertion, made endlessly over the past year, provides the justification for the legislation. If you want proof that Virginia politically is becoming New Jersey, now you’ve got it.

Here are just a few recent examples of misleading rhetoric:

Said Scott Surovell, D-Fairfax, a key legislator pushing for the landfilling option: “These ponds that are there right now are leaking, there’s no dispute about that. Getting that stopped is the number one priority and that’s what this bill does.”

Michael Town, executive director of the Virginia League of Conservation Voters, described the existing coal as pits as “lakes full of toxic coal ash. … Can you imagine what the environmental protections were in the 1930s? That is how this stuff is being managed today. And we do not think that’s appropriate, and I think most Virginians would agree.”

Said a Southern Environmental Law Center press release: “After years of seeking to leave its coal ash in leaking pits, Dominion is agreeing to support legislation that will require all four sites in the watershed to be completely excavated. ”

Yes, existing coal ash ponds are “leaking” but let’s understand what that means. Under the old system for storing coal combustion residue at power plants, the coal ash particles are saturated with water. Rain water falls upon the ponds, creating hydrostatic pressure on the water mixed with the coal ash. That water is forced into the water table and then slowly migrates toward nearby rivers and streams. Monitoring of groundwater and nearby surface waters has detected traces of heavy metals which, in some instances, exceed Environmental Protection Agency standards.

How dangerous are those traces of heavy metals? Are they “toxic”? In the case of Dominion’s Chesapeake coal-fired plant, a federal judge found that the traces were so minute and diluted by the waters of the Elizabeth River that they posed no threat to human health. There is evidence that “leakage” from the Chesterfield power plant has elevated levels of heavy metals in the Dutch Gap Conservation Area, but the argument that it poses a threat to human health is based on the absurd assumption that fishers, boaters and campers might be exposed to raw river water on a continual basis throughout the year. There also are hints that leakage at Possum Point has contaminated well water of immediate neighbors, but (a) the point remains unproven because the well water is “upstream” from the ash ponds, and (b) Dominion alleviated the fear by hooking up the homeowners to municipal water. In other words, the argument that existing arrangements are dangerous is highly localized in some cases and highly tenuous in others.

As an aside, there is an unstated assumption that drinking water must be “pure” to be safe for human consumption. If a lot of, say, zinc or selenium, is bad for you, then even a small amount cannot be good for you. Wrong. A little bit of zinc and selenium are necessary for human life. Look it up: Zinc deficiency contributes to high blood pressure. Selenium deficiency contributes to Kashin-Beck disease, a weakening of the heart. Moreover, these elements exist naturally in the environment. If minute traces killed us, we’d all be dead.

In any case, the purpose of the new EPA regulations is to replace the existing coal ash ponds with a safer system. The system proposed by Dominion in accord with the EPA regulations would do several things. First, it would de-water the coal ash. With the coal ash no longer be soaked in water, no more leaching of heavy metals would occur. Second, the EPA-approved approach would consolidate multiple coal ponds into a single pond at each site. And third, it would cap that single pond with a synthetic liner (topped with dirt and vegetation) to prevent rain water from seeping through and adding hydraulic pressure. Unlike the legacy regulations, the new regulations are designed to prevent leakage.

The EPA-approved coal ash storage system bears no comparison to the existing system. Declaring that the EPA-approved system constitutes a threat to human health by citing flaws of the old system can most charitably be described as misinformation. The only argument I have seen that suggests “leakage” might conceivably occur is that groundwater might migrate through a small portion of the proposed Chesterfield storage pit, which intersects with the water table, allowing a small amount of heavy-metals leaching might occur. But no evidence has been presented to indicate that such “leakage” would have a measurable impact on nearby surface waters.

In other words, the deal struck by Richmond lawmakers has no rational basis. The politicians have been swayed by totally irrelevant information. I’m surprised that Dominion went along. But with all the other battles it’s fighting — most prominently, the Atlantic Coast Pipeline — I can conclude only that the utility decided to cut its losses and negotiate a deal that held it relatively harmless. Dominion has already written off several hundred millions in coal ash-related costs, and the deal fobs off another $1 billion to rate payers. While the utility undoubtedly will have to eat several hundred million dollars more, it likely can console itself that the losses will be more than offset by the 2018 rate freeze that gives its earnings an ample cushion to absorb setbacks like this.

As usual, rate payers will get the shaft. They’ll pay $1 billion for the dubious benefit of having coal ash placed in pits with synthetic liners on the top and underneath instead of pits with synthetic liners on top. I feel so much better now knowing that I can visit Dutch Gap every day of the year and rinse my dishes with river water without fear of toxic contamination.