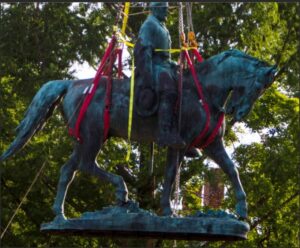 The century-old equestrian statue of Robert E. Lee in Charlottesville, Virginia, has been broken up, and, more likely than not, melted down into bronze ingots by now. But nobody involved in this officially sanctioned act of iconoclasm is saying whether that’s the case. Four weeks after the filing of a petition for injunction intended to prevent the statue’s destruction, the Charlottesville circuit court hasn’t even scheduled a hearing. Charlottesville’s woke excuse for a newspaper of record, the Daily Progress, has been notably incurious about the statue’s current whereabouts or condition.

The Lee equestrian was mainly the work of Henry Merwin Shrady, the sculptor who created the Grant Memorial at the foot of Capitol Hill in Washington. In a way, it was conceived as a peace monument. It showed the Confederate commander in dress uniform, hat at his side, back ramrod straight and with a facial expression of sober resolve. Traveler, his mount, walked with head bowed. Lee had surrendered but retained his dignity in defeat. The expression of resolve reflected a determination that the war be over.

After midnight on December 7, 2021, Charlottesville’s city council hastily—and possibly illegally—approved a resolution to donate the bronze statue, which had been removed from a downtown park in July, to a local African-American heritage center. The center proposed to melt the bronze down so that it could be recast in a “community”-inspired memorial celebrating wokedom’s new world of elevated racial consciousness. END_OF_DOCUMENT_TOKEN_TO_BE_REPLACED