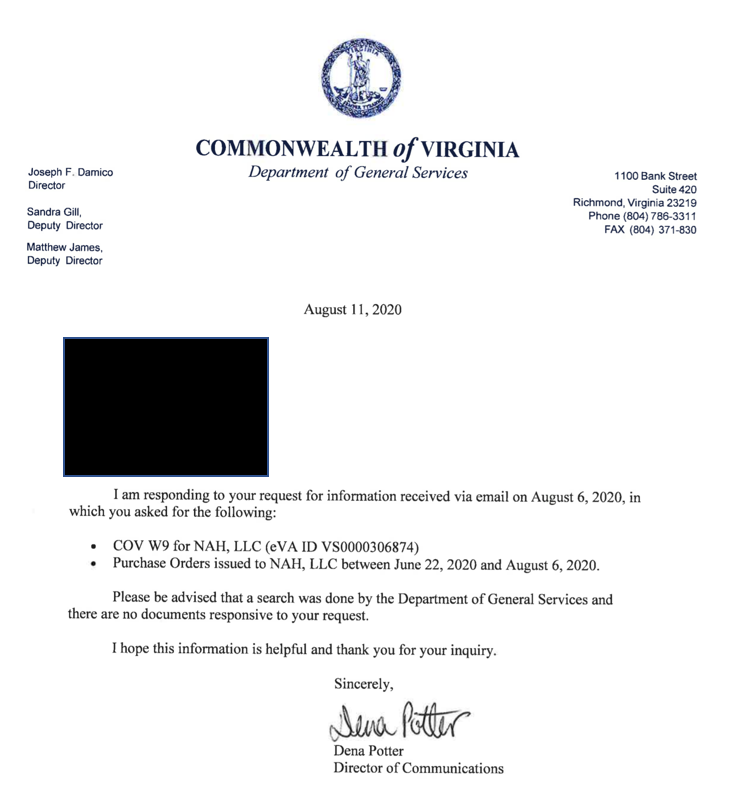 No Department of General Services records that the City of Richmond filed documentation of the statue-removal contract with the state.

The defense of Richmond Mayor Levar Stoney’s awarding of a $1.8 million statue-removal contract to a campaign supporter — that he followed state emergency procurement law, even if he didn’t abide by the City of Richmond’s law — has no basis in fact.

Stoney’s defenders have argued that the public health and safety were at stake when protesters were trying to tear down the statues, and the Mayor had to act decisively. Stoney executed the contract in compliance with state law that permits the local director of emergency management to forgo “time-consuming procedures or formalities” when awarding contracts during an emergency, Betty Burrell, the city’s director of procurement, told the Richmond Times-Dispatch two days ago.

“Were it possible to pursue a traditional procurement, the mayor would have done so, but circumstances required him to pursue a different legal avenue,” said the mayor’s spokesman Jim Nolan. “This decision was fully within his authority, and he stands by it.”

There’s just one problem with this line of argument: Stoney did not comply with state procurement law. The law does not give local officials a blank check; it requires them to leave a public record of their actions.

Under “§ 2.2-4303 Methods of procurement” the state code plainly lays out the rules for skipping the competitive bidding process in case of emergency. It lists the following requirements:

Stoney never explained in writing the basis of the emergency or his justification for hiring NAH, LLC, a corporate shell that had been created nine days before he signed the contract with NAH’s principal, Devon Henry. Nor did Stoney provide an explanation of why he selected a company that had existed only nine days and had no business track record. Henry owns a minority contracting firm, Team Henry Enterprises, which does have a track record, but he did not use that entity to fulfill the contract.

There is no record of a written determination — at least none delivered in response to our Freedom of Information Act requests to the City of Richmond — in the contract file. Nor was a record of the contract filed with the Department of General Service electronic procurement (DGS) website, as would be needed to comply with state emergency-procurement law.

The DGS procurement website is known as eVA. It includes a searchable database of purchase orders, suppliers, and contracts. NAH LLC does appear in the database as a vendor, classifying itself as a “moving/relocation consulting service.” But no one is identified as a contact or principle of the firm.

A search for NAH purchase orders and contracts during the last quarter year turned up a blank. The lack of such an order is confirmed in a DGS response to a Freedom of Information Act request by my collaborator, who does procurement work for a state agency and asks to remain unidentified. A redacted image of that letter appears above.

Bacon’s Rebellion attempted to reach the Mayor’s Office for comment. An email to Stoney spokesman Jim Nolan bounced back, saying that he was away from the office until Aug. 24 and to contact Wesley Jones.Two emails to Jones bounced back as undelivered.

Meanwhile, in the political world… Richmond Councilwoman Kim Gray, who is running against Stoney for mayor, wrote a letter to Richmond Commonwealth’s Attorney Colette McEachin to call for a “full, complete and immediate investigation into the facts and circumstances surround this matter to determine whether any laws or emergency procurement rules were violated and whether any criminal charges are warranted.”

While Gray is running as a political moderate sympathetic to property owners and police, Stoney is catching flack from the political left. Mayoral candidate Alexsis Rodgers tweeted: “Let me get this straight… Not only did @LevarStoney shut #RVACouncil out of the process, he struck a deal in the dark. He told the public the city needed private donors to fit the bill and gave the contract to one of his political donors.”

City Council candidate Mike Dickenson also has criticized the mayor. In a comment posted on Bacon’s Rebellion, he wrote: “Mayor Stoney has committed crimes in his operation of the City. First, he did not follow the prescribed legal process to remove the monuments. Second, as we know now, the 1.8 million went to a company that was a donor to the Stoney campaign.” Dickenson has made similar points on local talk radio.

Stoney is conceding no ground. According to the Richmond Times-Dispatch, the mayor’s chief of staff Lincoln Saunders said yesterday that Henry’s firm was chosen for the job after the city reached out to six local contractors and “many others” in the Mid-Atlantic. All turned the job down.

Explaining why Henry’s name was omitted from documents relating to the contract and NAH’s registration, Saunders said: “From what happened in Charlottesville, to the retaliatory actions taken yesterday against Senator Louise Lucas, anyone who questions the contractor’s decision to shield his name hasn’t paid attention to what happens to those who stand up to confront racism,” Saunders said. “We firmly believe the city got a fair price for the services rendered.”

In a tweet, Stoney praised Henry: “When no one else would take the job, Devon Henry stood up…. But he doesn’t just remove monuments — he builds new ones. His team build the Memorial to Enslaved Laborers at UVA. I’m proud of this Black-owned business.”

When no one else would take the job, Devon Henry stood up… But he doesn’t just remove monuments – he builds new ones. His team built the Memorial to Enslaved Laborers at UVA. I’m proud of this Black-owned business. https://t.co/YsOuet9hGF

This entry was posted in Politics, Public corruption, Scandals and tagged James A. Bacon, Stoney statue contract. Bookmark the permalink.