We Underpaid Dominion in 2019? Not Really. 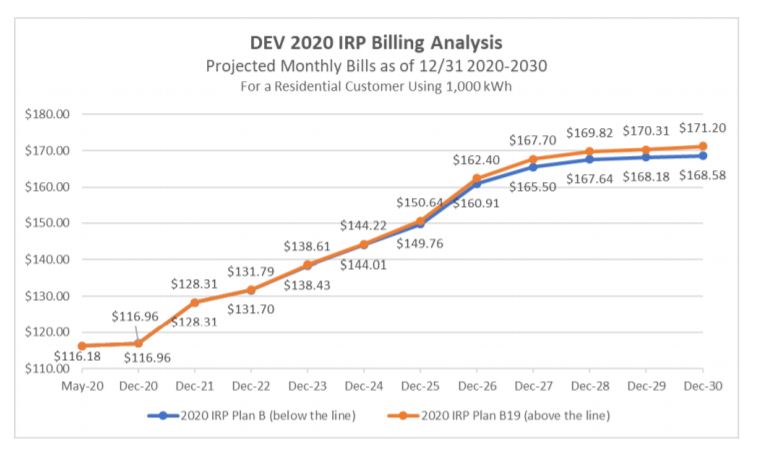 Future Dominion price increases. Source: SCC.  Actually, 1000 kWh per month is a bit low for the average residential customer, so many Virginians will be paying much more. Click for large view.

You will be shocked to learn that we customers of Dominion Energy Virginia did not pay it enough money in 2019. The shareholders did not get the profit margin they were due, the utility reported to the State Corporation Commission, which subsequently reported it to us on August 18.

Actually, these guys were not utility accountants, but they were on the right track.

We’ve entered the realm of energy comedy. The utility accounting process now mirrors the famous movie “The Producers,” with the goal being to book little or no actual profit so high rates can be maintained or even made higher. There is honest accounting, show-biz accounting, but for real whiz bang results there is utility accounting.

The SCC’s annual report to the General Assembly on utility accounting, now including projections of future rate costs, normally comes out closer to September. I was tipped to expect it early by a Dominion big wig, which should have told me it was a report they wanted publicized. This is Dominion playing the long game, preparing for the 2021 showdown on its rates and profits in a formal SCC audit and rate case.

The rules for this long game have been rigged in the utility’s favor over several years by a compliant General Assembly. This is not news to Bacon’s Rebellion readers. But here we go again.

Just two years ago, this annual report caused little stir and only a couple of us wrote about it. Yesterday the SCC release sparked a story at Virginia Mercury and dueling angry news releases from the Democrats at Clean Virginia and something called the Northern Virginia Republican Business Forum. Technically, that last group was attacking the new Virginia Clean Economy Act, but there is overlap with the SCC’s report.

The Republican group complained that the massive build-out of solar, wind and battery storage and the other costly elements of that plan (such as the new electricity welfare program) will raise the cost of a moderate monthly bill (1,000 kWh) by $500 a year. Wrong. The new report sets the price increase at between $52 and $55 per month, or as much as $660 per year. The costs should hit in full by about 2030, once most of the new facilities are online and being charged to customers. That’s just under a 50% increase.

More new spending is expected beyond 2030, as Dominion replaces its current $24 billion capital rate base with up to $59 billion in new capital projects  It will be an entire rebuild of the company, times two, at our expense.

Along with paying for the new wind and solar plants, captive ratepayers are also on the hook for the old coal and natural gas plants. If they are retired early, as the environmental activists desperately want, their original capital cost is still recouped by the utility, plus any costs for closing them down. Dominion retired 11 such facilities in 2019 and set the accounting cost at $264 million, taking 100% of the charge immediately. With that impairment adjustment, it claims the 2019 profit margin was only 8%. Only. The SCC has set its authorized return at 9.2%, which would have been another $75 million.

The Dominion rate case that kicks off in 2021 will cover four years of operations, and the company’s costs and profits will be assessed in total. Overall, the SCC estimates the utility has earned about $500 million in excess profits in 2017, 2018 and 2019. The results from 2020 are still unknown but are likely to include more manipulated red ink. Everything is subject to change under a full audit.

A previous clueless General Assembly gave the utility control over how it wanted to account for or “time” the impairment costs of closing a perfectly viable power plant. The 2020 General Assembly sought to reduce the damage with legislation (House Bill 528) giving the SCC more discretion on whether to book the costs all at once or over a longer period of time.

The interpretation of this bill has become a major issue in the Appalachian Power Company’s rate case, which is now underway. APCo is also killing off several viable fossil fuel plants, simply to satisfy the political whim of the day, and trying to charge the costs off against its profits in one big pile.

Here’s what nobody will tell you. In general, it doesn’t really matter if the customers take the hit on the closed plants rapidly or slowly. The utility will recover its costs either way, and the customers provide the money either way. But careful manipulation of the process can allow the utility to claim it needs a rate increase (which APCo is now seeking) or to claim it doesn’t owe the ratepayers any refunds (which is what Dominion will assert in 2021).

This is the “Bialystock and Bloom Accounting” world that the General Assembly has made, falling every year for whatever new line of palaver the lobbyists (including now Green Greed lobbyists) are peddling. Prepare to pay more, much more, and if your house is on the ocean, do not expect any of this to slow the rising sea by so much as a millimeter.