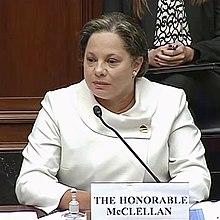 The left will not be swayed from invoking racism in every situation, everywhere.

Because those actually are not the objectives of the left.  They simply don’t care about such things.  They offer public policies that have the opposite effects.

They want poor people radicalized. Period.  Full stop.  When some die or have their lives ruined in the process they are considered collateral damage in a higher cause.

Sen. Jennifer McClellan (D-Richmond) is quoted there as saying:

(Health Commissioner Dr. Colin) Greene’s views made her (McClellan) question work done to try to reverse the disparities, including the state’s April 2021 Maternal Health Strategic Plan, which says ‘structural racism is at the root of maternal health disparities just as it is for many other health disparities.’ (emphasis added)

As if that perfect embodiment of progressive virtue signaling will somehow improve the health outcomes of poor Black women and their babies.  For progressives, words are actions.  The tactic is called “truth by repeated assertion” used to frighten political opponents into silence.

Sen. McClellan and the entire General Assembly Black Caucus are complete hypocrites in this matter.

The bill was aimed directly to improve the health of the urban poor in Virginia by incentivizing improved primary care in those areas.  I know that because I wrote it.

The Black Caucus let the bill die without a word in a committee totally dominated by Democrats and chaired by a Black man.

McClellan’s most recent “outrage” stemmed from reading the following in another Post article , “Tension over role of racism in public health strains Va. agency under Youngkin”.

Greene said he wants staff to be accountable for their work and, doubting the well-established link between structural racism and health disparities, plans to create an investigative unit within the department of health to “start fresh” on, for example, reasons for high rates of Black maternal and infant mortality.

His predecessor, Dr. Norman Oliver, never figured that out.  Dr. Oliver got his M.D. degree in his 40’s, a significant achievement.  After that, as the Post informs us, he “studied health inequities and racial discrimination as a longtime professor at the University of Virginia”.  Clearly the background Ralph Northam looked for in a health commissioner.

Commissioner Greene has nearly 40 years of medical experience, having practiced for decades as a primary care physician.

In a career as an Army physician, he treated soldiers and their families, served as a chief medical and public health adviser and directed healthcare and biomedical research facilities overseas and in the States.  After Army service, he practiced as a primary care physician in Winchester and served as director of the Lord Fairfax Health District.

Dr. Greene wants to investigate the medical and health care access reasons for Black maternal and infant mortality.  So he can get his Department to address them.

Imperiling the woke with accountability. As befits a Washington Post report, the article that generated “outrage” quoted an unnamed source:

Within the health department, one anonymous employee who was not authorized to speak on behalf of the agency, said Greene’s philosophy imperils their work and the people they serve and represents a full turnabout from policies prioritized under the administration of former governor Ralph Northam, a Democrat.

I understand the Post is looking for Dr. Greene’s co-conspirators. Perhaps there is a “dossier” on him.  There are consultants with whom the Post is familiar who specialize in dossiers if they want one.  Perhaps prime time Congressional hearings can be held.

Dr. Greene wants people “accountable for their work”.   My goodness.

An anonymous employee appears to think that his focus on actual solutions “imperils her work”.   Given the context, we can only hope that whatever she does at VDH actually is imperiled.

Off with his head.