How Many Pieces Did You Say It Will Take To Build This Plant? 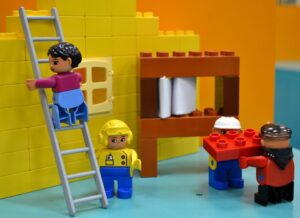 The company projected that the 1.7 million square foot plant would create more than 1,700 new jobs over a period of ten years.

The company currently has a manufacturing plant in Mexico, but, because the United States is a key market, the company wants to shorten its supply chain issues and reduce its overall carbon footprint.  Along these lines, the plant will be designed to be “carbon neutral”.  To accomplish this, it will use some offsets.  According to the news report, “The factory will also be paired with a solar park, which will be built by 2025 and generate the energy needed for the plant to run.”  From the news report, it is not clear whether the electricity produced by the solar farm will be used directly by the factory or whether that is one of the offsets.

One has to be skeptical about the “carbon neutrality” of a factory that produces small plastic blocks.  Reportedly, one of the FAQs provided by the company claimed its plastic brick were “inherently sustainable” because they’re passed down from one generation to the next.  That answer is not very satisfactory on several levels.  For example, it is not clear that the thousands of Lego blocks we gave our grandsons over the years will be passed down to a new generation.

On a more serious note, the company does seem serious about addressing the sustainability issue. Several years ago, it announced a goal of making all its bricks out of sustainable sources by 2030.  To that end, it made a significant investment in establishing a sustainability center.  Over the years, it has experimented with sugarcane-based bio polyethylene (Bio-PE).  More recently, it seems to have settled on recycling as the best means of reaching its goal.

Regardless of the merits of the sustainability claims, this is a win for the Commonwealth and the Richmond area.  Not only is this a $1 billion investment with the prospect of 1,700 jobs, but it is also a manufacturing plant.  They will make stuff.  Such facilities tend to include the greatest variety of job types.

As for the incentives to locate in Virginia, reportedly one attraction was the availability of a project-ready site.  Company officials later told Chesterfield economic development staff that “the first day they saw the site and met us on the site, they picked the site.”  That vindicates the emphasis of Stephen Moret, the former President of the Virginia Economic Development Partnership, on the state and localities investing in site preparation.  As for money, the company will be eligible for $56 million in Major Employment and Investment Project performance grants if approved by the General Assembly.

This entry was posted in Economic development, Manufacturing, Uncategorized and tagged Dick Hall-Sizemore. Bookmark the permalink.