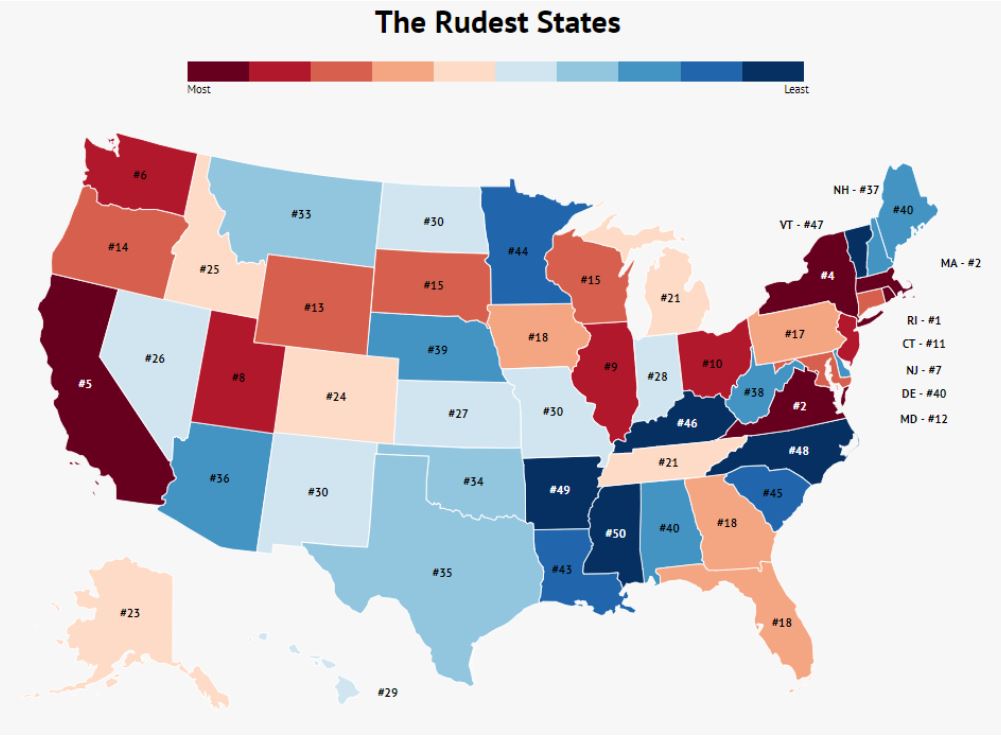 Rudeness in America, as ranked by Zippia.com.

The jokers at Zippia.com, the self-described career experts, are at it again. Following the ranking they published last week that declared Virginia to be the “grossest” state in the union, they have devised a ranking of the “rudest” states. I have news for those of you who thought of Virginians as courteous and genteel, you’re deluding yourself. Virginia ranked No. 3 among the rudest states — ahead of New York!

As anyone with a lick of sense knows, it’s all due to Northern Virginia. It is obvious to me what has occurred — the rudest residents of New York, New Jersey and Connecticut moved to Nova, thus lowering the rudeness quotients of those states and elevating the quotient for Virginia!

I have irrefutable proof of this proposition, as I shall explain below.

Let us start by understanding how Zippia.com calculates rudeness. It combines metrics for rude driving, generosity of tips, cursing at customer service agents, and states’ self-evaluation for rudeness.

Rude drivers. According to Insurify, the car insurance website, Virginia has the fourth worst drivers of any state in the country. The company compares at-fault violations, including accidents, DUIs, failures to stop, speeding, reckless driving, passing violations, and other citations for illegal driving as a percentage of the number of drivers applying for car insurance. 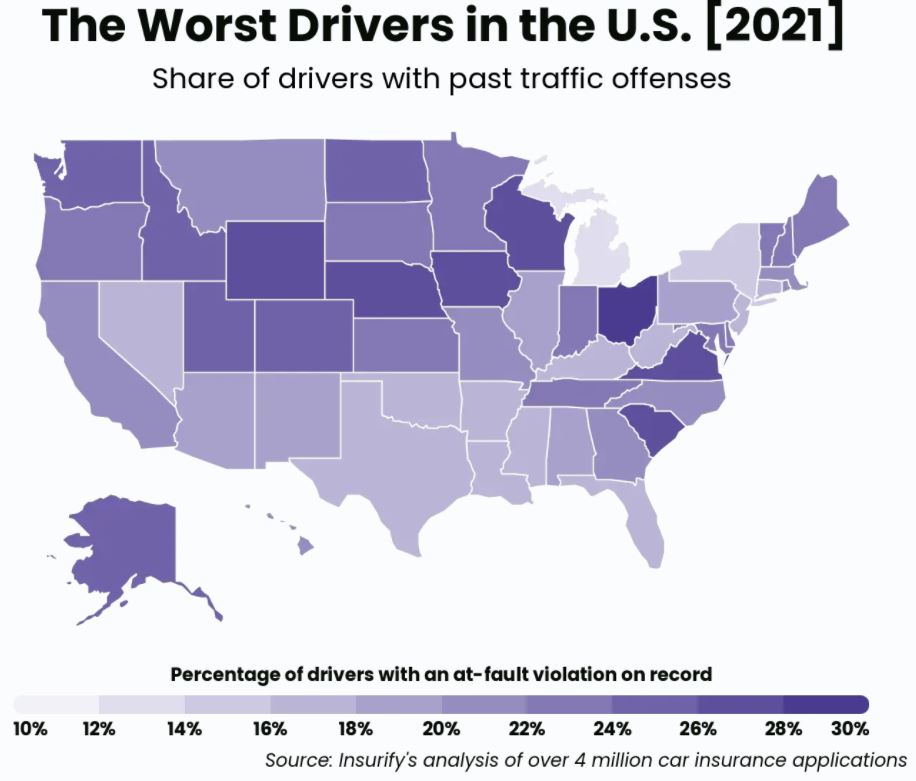 It stands to reason that there is a strong correlation between traffic congestion and driving infractions. The Washington metro area, and Northern Virginia in particular, is afflicted with some of the worst traffic congestion in the country. Driven to madness with frustration, NoVa drivers are more likely to scream at other drivers, flip the bird, and engage in aggressive driving behavior such as weaving between lanes and cutting in front of people. One can see this behavior routinely on Interstate 95 — although, I will say in NoVa’s defense, that the worst offenders seem to have New York and New Jersey license plates!

Lousy tippers. Americans on average tip 16.4% of the check. But that average figure disguises a significant variation between the states. Outside of Hawaii, the cheapest tippers in the country are in Washington, D.C., and I’m pretty, pretty, pretty sure, as Larry David might say, that miserliness leaks across the Potomac River to Northern Virginia. The average tip, according to Time, citing Square.com data, is 14.9% in D.C., and 15.9% in Maryland and 16.0% in Virginia. All other states bordering Virginia tip more generously — 16.7% on average in North Carolina, 17% in Kentucky and 17.3% in West Virginia, 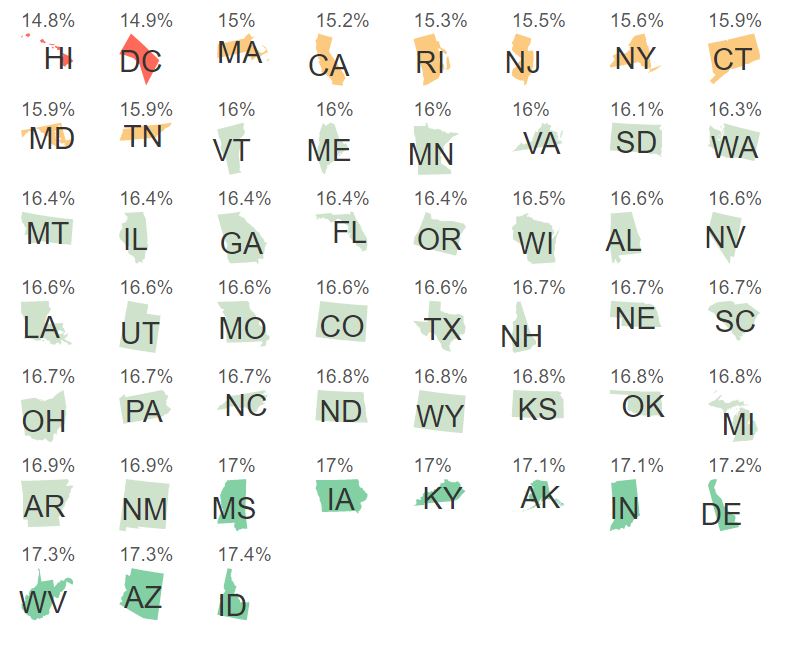 Source: Square.com by way of Time

As an interesting corollary, Business Insider conducted an analysis correlating tipping and partisan voting. It found a “moderate correlation” between a state’s election results and its propensity to tip servers. While Democrats are exceedingly generous with other peoples’ money, it seems that Republicans are more generous with their own. And we all know which part of the Virginia votes bluest, don’t we. 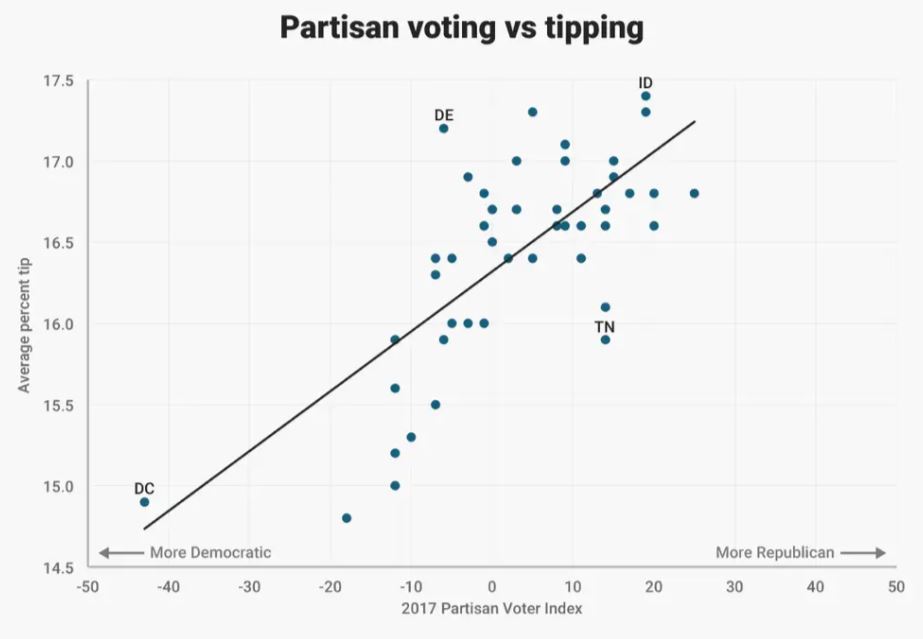 Cursing at customer service reps. Zippia also draws upon a ranking based upon the proclivity of people to curse customer service representatives on complaint lines. The report drew from 35 million transcripts of chats with customers of companies like Adobe, Citibank, SBC and Home Depot. LivePerson, which provides live chat technology, tallied “polite” words and “curse” words, differentiating between soft curses such as “shoot” or “shucks” compared to hard curses using profanity, explains InsideHook. Virginia customers are the most likely in the country to use curse words. 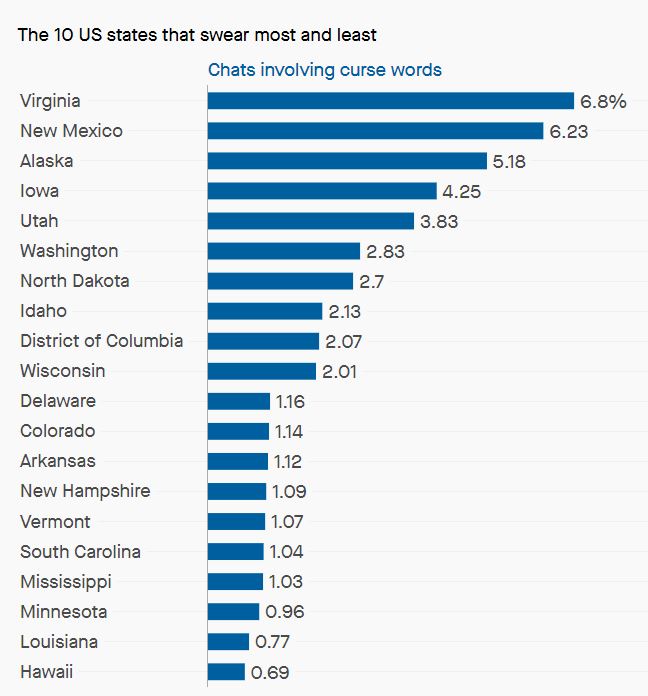 The Old Dominion’s saving grace is that fact that Virginia customers are more likely to use soft curses than profanities. I’ve got to say, if Virginians express their irritability by saying “shucks” and “shoot” a lot, I really can’t hold that against them.

Reputation. Finally, Zippia.com cites a YouGov survey that asked, “Do you think that people in your state tend to be more rude or more polite than most Americans?” Admittedly, YouGov was, in effect, asking people to rank their own state, not other states. In other words, the survey reflects self-image.

As a generality, respondents tend rate their own states as more polite on average than other states. YouGov calculated the difference between “more polite” and “more rude” responses to get a net score.

In our neck of the woods, there is a clear gradient — 8% negative politeness in D.C., 2% negative in Maryland, 9% positive in Virginia, 25% positive in North Carolina, and 27% in South Carolina. It’s a pretty safe bet that there’s a dramatic dividing line for politesse at the Rappahannock River. Northern Virginians are more akin to their D.C., and Maryland neighbors, while RoVa residents are more like their Carolina peers to the south.

Taking all factors into consideration, I’d say that Northern Virginia is comparable in rudeness to Northeastern states, while the Rest of Virginia is more like its southern neighbors. So, yes, I blame it all on NoVa.

If you don’t agree with my analysis, you can go f— yourself!