It is widely acknowledged by scholars on the Left and Right that there is a strong correlation between a high school student’s socioeconomic status and his or her propensity for dropping out. The generalization makes intuitive sense, and there is ample data to back it up. Across Virginia, 7% of economically disadvantaged (ED) students fly the coop before they graduate. Only 4% of their not-disadvantaged peers (NED) do.

But the Richmond City public school system is an anomaly, as John Butcher, publisher of Cranky’s Blog, has found in his relentless probing of school-system statistics.

City of Richmond high schools appear to be doing a uniquely bad job for students who are not laboring under the burden of being economically disadvantaged — the students whom one would hope would have a better chance of escaping the giant sucking sound of educational dysfunction. No other school system comes close in failing its NED students, as can be seen in this graph, which shows the rates for all school systems reporting 10 or more dropouts. Richmond is the yellow bar. 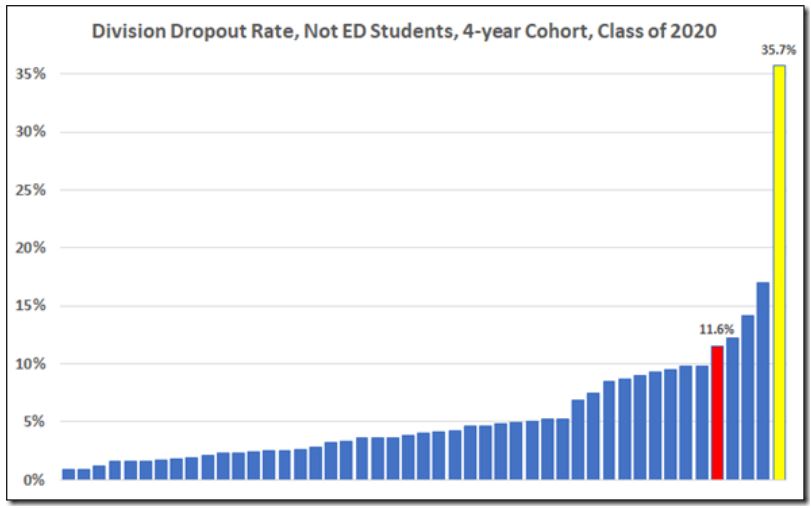 Cranky points to budget cuts for truant officers as one possible explanation. City schools have fewer officers dragging kids back into school. Perhaps… but I suspect that there’s more to the story.

Some clues appear in the demographic breakdown of the dropouts. A perusal of the Virginia Department of Education data shows that Richmond dropouts are dominated by Hispanic students and English learners, two groups with significant overlap. Of the 350 dropouts in the Class of 2020 cohort, 204 were Hispanic and 194 were English learners. Only 122 were black, who were three times more numerous in the school system than Hispanics. Only 11 dropouts were white, and the number of Asians was so small it was suppressed in the data.

Another clue: 220 dropouts were male; only 130 were females.

Hypothesis: male high-school Hispanics are an exceptionally high-risk group for dropping out of school. The Hispanic sub-culture places a high priority on joining the workforce at an early age, and, I would conjecture, the pressure is even greater on boys than girls to start contributing to household income. If Hispanic students are deficient in English, they likely under-perform other groups academically, whether they are “disadvantaged” or “not disadvantaged.” More easily discouraged by their studies, they are less likely to see a return on investment in time and effort in continuing their education.

There may be more to the explanation for the high rate of NED dropouts, but I’ll bet this is part of it.

Note: I briefly published an earlier version of this post, thought better of it, and took it down. This version represents a significant re-write.