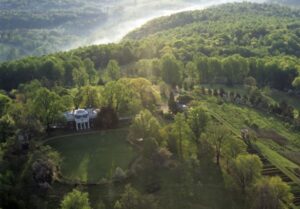 Among the American founders, Thomas Jefferson is most enduring: as historian Jon Meacham writes, “With… his sense of taste and love of beautiful things – of silver and art and architecture and gardening and food and wine – Jefferson is more alive, convivial.” On display at his home and museum of Monticello, these qualities have also made the third president a uniquely controversial figure. Jefferson’s fame even seems approaching notoriety as thorny facts continue to emerge about his treatment of slaves and illicit liaison with a 15-year-old Sally Hemings.

During the summer of 2020, nationwide protests against racial injustice condemned Jefferson, whose statues were shrouded from public view after an outcry in Decatur, Georgia, and spray-painted with the word “Confederate” and toppled in Portland, Oregon. As a focal point of potentially the largest movement in U.S. history, the fate of historical figures including Jefferson is at the front of the collective public conscience. Should he be rebuked, forgotten?

The Thomas Jefferson Foundation, which operates the Monticello museum, claims to offer an experience for visitors to answer this question by “bring[ing] history forward into national and global dialogues.” But my recent visit proves otherwise.

Others and I recall emphasis placed on Jefferson’s genius; his authorship of the Declaration of Independence; his European architectural influences, et cetera. In short, I feel as though I encountered something historically monumental. But it was entirely relegated to the abstract past. I never interacted with an exhibit that described Jefferson’s activities as part of a continuous timeline of human action—as ideas with relevance in current affairs.

To devise a solution, one must first ask what a museum, or memory site, is. As French historian Pierre Nora explains, lieux de memoire “are created by a play of memory and history.” So, while Monticello is a monument to history – to man and era of the distant past – it must also offer the visitor a story that explains why it deserves to be remembered.

Locked in a permanent tug-and-pull relationship, Nora explains, memory “is a perpetually actual phenomenon, a bond tying us to the eternal present,” and history “is a representation of the past.” According to Nora, the role of historians and archivists at Monticello, therefore, is not only to sort out “the gigantic and breathtaking storehouse of a material stock of what it would be impossible for us to remember.” It is also to form a narrative. Curators must select and deselect certain events to present a story that helps visitors make sense of the memory site, a historical artifact, and convince them that it is worth remembering in the present—that the past is relevant now.

To make Monticello an effective memory site, I propose that a small theater be erected in the visitor’s center to offer a free, 20-minute documentary to append tours. The film will feature commentary by historians (such as Meacham), journalists, and civil rights activists, who will review the legacy of Jefferson’s ideas in American history, discuss the current protests, and evaluate pro- and anti-Jefferson arguments.

As such, the film will not advocate a form of “restorative nostalgia,” coined by scholar Svetlana Boym. The film will not “pretend to rebuild the mythical place called home” by reducing and romanticizing its subject like some historians, who ignore the inequities of Jefferson’s circumstances and behold them as a perfect past to restore.

It will instead exemplify Boym’s notion of “reflective nostalgia,” or be “aware of the gap between identity and resemblance.” By fairly representing a dialogue between diverse and differing opinions, the film will, of course, make a case for honoring Jefferson’s legacy. But it will equally represent compelling counterarguments—arguments rooted in the values of an American identity that is fundamentally different from Jefferson’s.

Ultimately, the sine qua non of the Monticello museum is to illustrate that Jefferson is very much alive, and that his voice rings in ongoing debates to remember or rebuke figures of American history.

The Thomas Jefferson Foundation should fulfill its mission by adding an auxiliary exhibit that brings history forward into national dialogues. Otherwise, Monticello and Jefferson himself might end up on the wrong side of it.

This entry was posted in Culture wars and tagged Guest contributors. Bookmark the permalink.